Huntington’s Heckscher Park through my childhood. 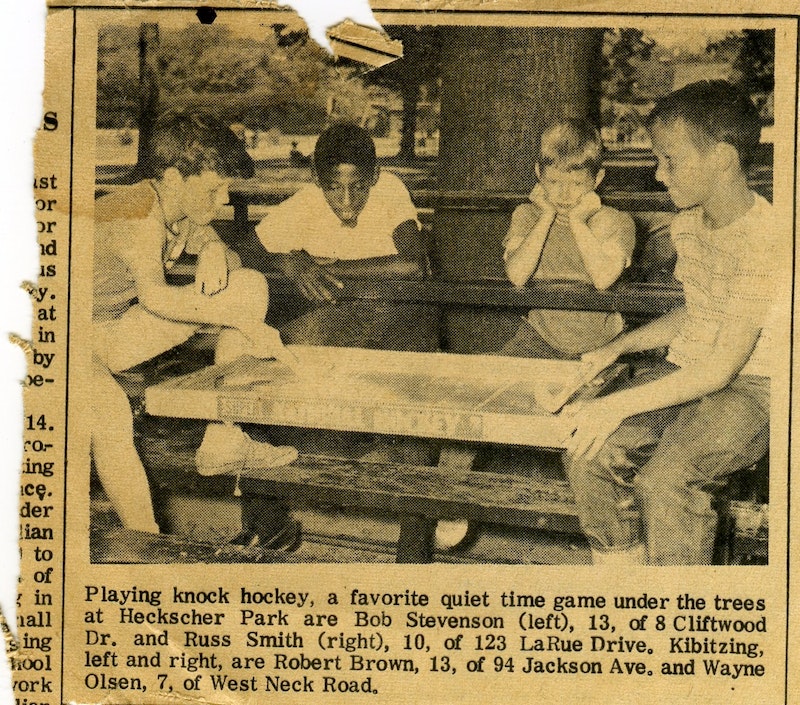 One of the many pleasures of growing up in Huntington, New York in the 1960s and early-70s was the proximity to Heckscher Park, about a 20-minute walk from my house. I’m hardly alone in this opinion: ask any native Huntingtonian for a snap appraisal of the town and Heckscher inevitably pops up in the top three, probably along with the number of public beaches. I’m sure I can’t remember my first visits there, as a toddler, but do recall feeding the ducks in a big old pond, throwing out stale chunks of Wonder Bread and watching a swarm of the birds compete for them. August Heckscher build a museum there many moons ago, but as a kid I found that pretty dull.

Yet if you lived in Huntington for a number of years, the Park shifted in purpose as a destination as you grew older. For example, in the cutting above from the weekly Long Islander (founded by a 20-year-old Walt Whitman in 1839) that my mom saved, the jocular caption reads: “Playing knock hockey, a favorite quite time game under the trees at Heckscher Park are Bob Stevenson (left), 13, of 8 Cliftwood Dr. and Russ Smith (right), 10, of 123 LaRue Drive. Kibitzing, left and right, are Robert Brown, 13, of 94 Jackson Ave. and Wayne Olsen, 7, of West Neck Road.” It was the summer of ‘65, and what was left out of the description, to my mild chagrin, was that the game—which was hardly “quiet time,” but rather often boisterous—shown was part of a several-days tournament, which, thank you, I won. There were plenty of activities for kids in the summer, a sort of unsupervised “camp,” where we’d report at around 11 a.m. on temperate days. My parents, and those of my buddies, would no doubt be cited, possibly arrested in the environment of 2016, for allowing pre-teens to walk to the Park and hang out for hours on end, but in this respect, it was a more folksy time. Thinking back, it’s a wonder Opie, Barney, Goober and Aunt Bea didn’t show up.

My brother Jeff had a summer job at Heckscher for several years running—a plum assignment that he’d wrangled through connections at school—and he’d mow lawns and clean up what little trash could be found. And another brother, Doug, attended hootenannies there in the early-60s during summer nights, where the assembled would sing Bob Dylan, Joan Baez and Kingston Trio songs. I played little league baseball for five years in the 60s—each spring, various local businesses would sponsor teams, and I remember wearing uniform jerseys with Marsh’s (a men’s store) and Aboff’s (paint store), among others—and once in a while we got to play at one of Heckscher’s diamonds, which were splendidly manicured and a bit more fancy than the fields of Mill Dam Park.

As I got older, the Park was often a nighttime meeting spot for my buddies and me, often where you’d clandestinely—never knew what the “pigs” were up to—make purchases of nickel or dime bags of pot, flirt, or drink sixers in the hidden recesses of its 18 acres. I’d often walk to Monaco’s, a nearby deli, where for a buck they sold what I thought at the time were the best heroes I’d ever tasted. (Many years later, during college, when I was in town to see my friend Howie Nadjari and his folks—who lived on the proper LaRue Dr.—we went to Monaco’s and the magic was gone: a bit more worldly, the hero was decent but kind of pedestrian.)

There were also weekly concerts at Heckscher when I was 16 or so, and the main draw was the late Tom Pomposello—a blues musician who played bass guitar at some gigs for the legendary Mississippi Fred McDowell and co-founded Oblivion Records with Fred Seibert. Tom had played the Gaslight in Manhattan, so when he took stage at Heckscher it was a big deal. I remember one night in the spring of ’72 when he was the headliner, and most of my “music friends”—Mike Bifulco (who was a protégé of Tom’s), Scott Savitt, Tom Demske, Elena Seibert, Ricky Rosenthal, Mitch Stein, Ruthe Poma, Jimmy Zimmerman, and countless others—were all there, raptly listening to the show. And I could be mistaken, but I believe the first Earth Day in 1970—a big party really, low on the rhetoric—was at Heckscher for the Huntington venue.

I haven’t been to Huntington in several decades, but although the town has grown exponentially, and become a lot more hoity-toity than in my day, I’m sure Heckscher Park is still a center of activity.