LA Freeway Is the Heart of a City

Freeways are the last bastion of true democracy. 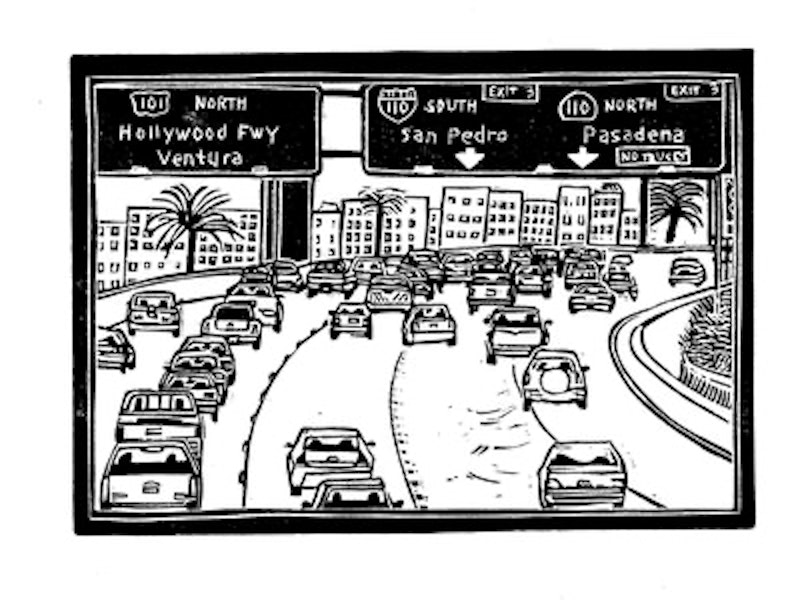 On the night of June 23, 1997, champion boxer Oscar De La Hoya was driving his brother’s Mercedes on the 605 Freeway near Whittier. He was in the fast lane and suddenly the car stalled. He maneuvered the car to the left shoulder but couldn’t find his cell phone. Common wisdom dictates that if your vehicle stalls on the freeway you should wait in the car and call for help, but De La Hoya felt differently. He opened the car door, waited for a gap in traffic, and sprinted across five lanes to the other side of the freeway. Moments later a massive truck smashed into his Mercedes, totaling the car.

All Angelenos have stories of witnessing horrific car accidents or getting caught in nightmare traffic jams. To live in Los Angeles one must make peace with the freeway. You learn to accept the gridlock, reckless drivers, ramshackle cars and ever-prowling highway patrol. In a city that clearly delineates the haves from the have-nots, freeways are the last bastion of true democracy. Whether you drive a Rolls Royce or a broken-down Chevy, all drivers have equal access to freeway lanes.

Charles Bukowski wrote, “When I drive the freeways, I see the soul of humanity of my city and it’s ugly, ugly, ugly.” The unwritten rule of freeway driving is to drive aggressively. Traditional defensive driving is not enough. To signal before a lane change guarantees the car behind you won’t let you in. The trick is to quickly change lanes and then hit your signal as if to say, “That’s right man, I just cut you off.”

Observing the speed limit is an unforgivable sin. Posted speed limits are simply suggestions and most people drive 10-15 miles over the limit when traffic is flowing. Tailgating is like a religion on LA freeways. It’s not uncommon to see drivers riding each other’s bumpers at 75 mph knowing that a sudden stop will be fatal. Driving LA freeways is like swimming in the ocean. Everybody does it despite the riptides and sharks and huge waves that occasionally claim lives.

Locals refer to the freeways by their route numbers as in “take the 405 to the 101.” Each freeway has a distinct character and flavor. The 405 is the busiest freeway in the world, known for its unrelenting traffic jams. This was the route OJ took in his famous White Bronco chase and the freeway subject to the Carmageddon closure in 2011. Driving the 101 is like taking a trek through old Los Angeles. You pass the Hollywood Bowl, the Capital Building, the iconic Western Exterminator offices and City Hall. The 5 links Los Angeles to Orange County and is known for its battered roads, narrow lanes, and monster traffic jams.

In total, the LA freeway system spans 528 miles. They are the defining architecture of Los Angeles and as Joan Didion wrote in her novel Play It As It Lays, the freeway is “the only secular communion Los Angeles has.”

The history of freeways in the United States is tied to Los Angeles. In 1901, the Pacific Electric Railroad created a public transit system known as “the Red Car.” The Red Car Line, with its bright red streetcars, was the primary means of transport for people getting around Los Angeles. It covered 25 percent more mileage than New York City’s current subway line. As cars became cheap and plentiful, the Red Car Line began to lose ridership. Vehicle congestion on local streets soared and urban planners spoke about “magic motorways” soaring above and through Los Angeles. Fearing a loss of control over local commerce, the Southern Pacific Railroad (which owned the Pacific Electric Railroad) lobbied hard against freeway construction.

It took the Automobile Club releasing the 1937 Traffic Survey to sway political opinion. The Survey recommended extensive motorways with cloverleaf interchanges, on-ramps, off-ramps, and elevated highways. Only cars would be allowed though initial plans called for light rail tracks in center lanes. The roads would be called freeways (“free of charge”) to distinguish them from toll ways that cost money.

The first Los Angeles freeway, the Arroyo Seco Parkway opened in 1940. The six-lane, eight-mile long road linked Pasadena and downtown Los Angeles. The route reduced travel time between LA and Pasadena from 27 to 12 minutes. The original speed limit was 45 mph and the road was designed to carry 27,000 cars a day. Today, it carries more than 125,000 cars daily.

LA’s second freeway, the Hollywood Freeway (the 101) also opened in 1940. Connecting the San Fernando Valley to Hollywood and downtown, the 101 made it easier for people to live in the suburbs and work in the city. Construction required the acquisition and demolition of thousands of homes and buildings via eminent domain. Among the structures destroyed were Rudolph Valentino’s home in Whitley Heights and Los Angeles High School near downtown. Rubble and debris were dumped in Chavez Ravine, the future home of Dodger Stadium.

In 1953, a four-level interchange was completed where the 101 connects to the 110 (Harbor Freeway). This was the first stack freeway in the world. Los Angeles became the model for freeway development and the “stack” became a symbol of local pride.

In 1956, President Eisenhower enacted the Federal Aid Highway Act. The law authorized $25 billion for construction of a nationwide interstate highway system. LA Freeway construction took off and soon the city had the 405 (1960), the 134 (1960) and the 605 (1964). Plans also called for a Beverly Hills Freeway linking the 10 to the 101 via La Cienega and Laurel Canyon. Wealthy locals protested and killed the idea. In contrast, freeway construction through Latino neighborhoods in Boyle Heights, East LA and Lincoln Heights displaced more than a quarter-million people.

In 1969, chickens began appearing on the side of the Hollywood Freeway near Universal Studios. Apparently, a poultry truck overturned and freed thousands of chickens. Passing motorists killed many of the birds but a colony survived and made homes in the roadside shrubbery. In the late-70s, the Department of Animal Regulation corralled more than 100 chickens and shipped them to a Simi Valley ranch. A few chickens eluded capture. The so-called “Hollywood freeway chickens” can still be seen on the 101 today.