Not all blocks are equal. 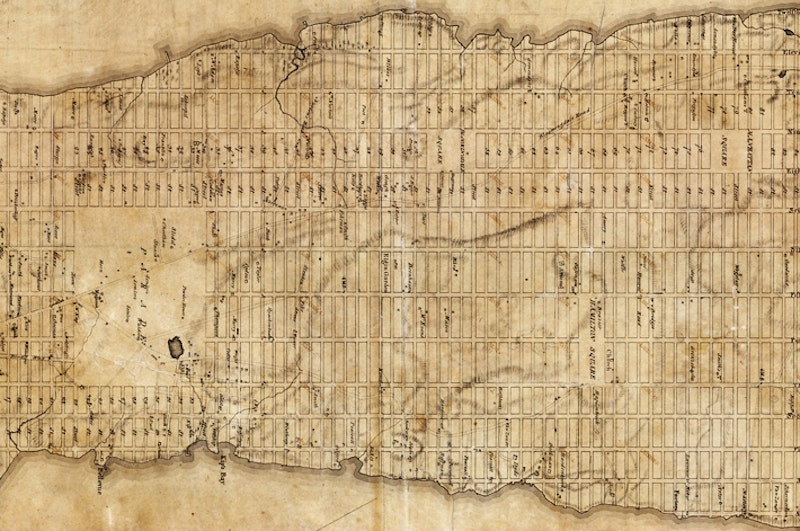 It might be assumed that the numbered avenues of New York City were laid out equally apart, and the numbered east and west streets are all equidistant, as well. That’s not quite true. The north-south streets are similar in distance apart, but not equal—from Houston Street north to 125th, they range from as little as 184 feet apart to as much as 206. And, the numbered avenues on the east side of Manhattan south of 59th Street from 1st Avenue to 3rd Avenue average 630 feet apart and the avenues on the west side from 6th to 12th Avenues are each 800 feet apart. Madison and Lexington Avenues were added in the 1830s on either side of Park (4th) Avenue, and thus the distances between those three avenues are about 422.5 feet on average. Most of Manhattan’s gridded street plan was surveyed by John Randel, Jr. in the service of a board of commissioners charged by NYC government and headed by Gouverneur Morris; Randel’s work was accomplished between 1807 and 1817, and construction of the street grid slowly moved north beginning in those years.

The long-distance champion for space between avenues, though, is between 5th and 6th—a full 920 feet. If you’re walking in midtown and are thinking it takes you a bit longer to get between those two avenues, you’re absolutely right. This means there’s a bit of extra space for compelling architecture, and one evening in December, I noticed some buildings on West 54th Street between 5th and 6th for the first time. The block is anchored by the Warwick Hotel (1926) on 6th Avenue, a longtime residence of Cary Grant and where the Beatles stayed during their first USA visit in February 1964, and the Florentine-style University Club (1898) on 5th, housing an organization devoted to art and literature and limiting their membership to male college graduates until 1987, when female grads were finally allowed in.

The block is dominated on its south side by the beetling black and grey wall and the northern entrance to the Museum of Modern Art. It will, in a couple of years, be completely overshadowed by 53 West 53rd, a residential tower that will be equivalent in height to the Empire State Building (minus its TV antenna). But walking east from 6th Avenue, I was struck by a number of attached townhouses on the north side I had been unaware of previously… 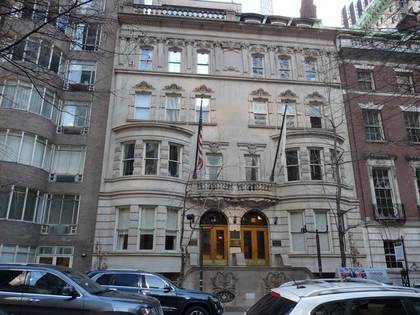 This grouping of two attached townhouses, #13-15 West 54th, was constructed in 1897 for Larchmont businessman William Murray by architect Henry Hardenburgh, whose perhaps best-known building is the Plaza Hotel.  It was preceded in this space by St. Lukes’ Hospital (1858). Murray never resided here and built the houses as a real estate investment.

John D. Rockefeller Sr., founder of the Standard Oil Company, purchased #13-15 in 1906 and while John D. lived at #4 West 54th, his son John D. Jr. resided at #13 until 1918. Ownership remained in the Rockefeller family until the early 1980s; for many years, John D Jr.’s son. Nelson Rockefeller, longtime New York State governor and briefly Vice President, used #13 for personal offices. It was here in 1979 that he died of a heart attack during a tryst with his secretary. 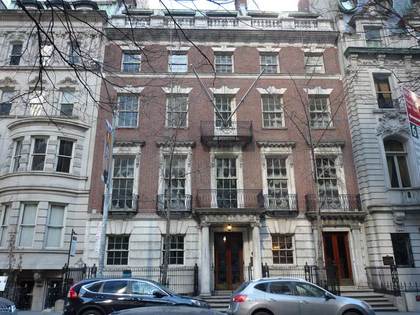 This neo-Georgian building at #11 West 54th is the famed architectural firm McKim, Mead and White’s entry midblock, though they also designed the University Club on the corner of 5th Avenue. The building was home to a cousin of J.P. Morgan, James Goodwin. For many years it was home to the Rhodes Preparatory School, whose alumni include James Caan and Robert de Niro. The entire building was recently listed for $59M. 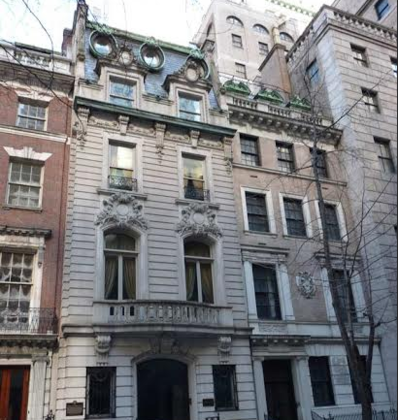 Banker Philip Lehman, president of the Lehman Brothers banking firm founded in 1850 and bankrupted during the 2008 overall financial collapse, commissioned #7 west 54th  in 1899 and it was completed by architect John H. Duncan, who was otherwise known for his memorials at Grant’s Tomb and Soldiers and Sailors’ Memorial Arch in Grand Army Plaza at Prospect Park in Brooklyn. The 5-story building features a mansard roof punctuated by three oval windows known as “oculi.” The Lehmans’ art collection was housed here for many years, and was then removed to the Lehman Wing of the Metropolitan Museum of Art. 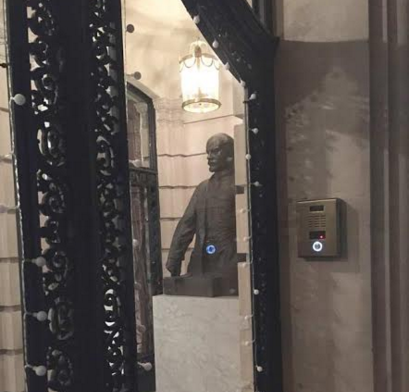 When I was passing #7 West 54th at night, I spied a familiar figure in the lobby. It was a statue of  Vladimir Ilyich Ulyanov, who under the pseudonym Lenin, was founder of the Russian Communist Party, leader of the Bolshevik Revolution and architect and first head of the Soviet state.

It’s ironic indeed that the founder of a socialist state allowing, in theory, no private property would have a likeness in the lobby of a building once owned by one of the chiefs of private capital and on a street filled with palaces owned by similar captains of industry.