A surprise from some very supportive friends. 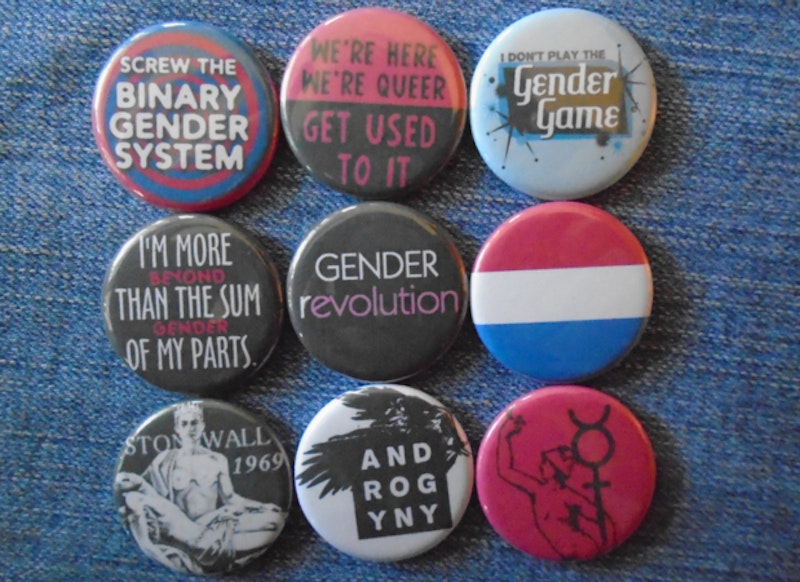 Galentine’s Day, as Leslie Knope wisely says, is like Lilith Fair—minus the angst, plus frittatas. It’s a day I’ll forever be grateful to Parks and Recreation for inventing, because not only has it given us some delightful comedy, it also resulted in a night I’ll never forget (and given the fickle nature of my memory, that’s really saying something).

On the Friday before Valentine’s Day, two of my dearest friends demanded my presence in a place where whiskey could easily be obtained. Once seated, they pulled the pin on a secret that they’d been keeping for weeks: this was to be my first Galentine’s Day. They grinned she-wolfishly, hauling out a gift bag filled with cards and letters.

I was at a loss for words—but apparently, my friends weren’t. Sixteen different people, including the mistresses of secrecy across the table, had written me notes full of love and support for my transition. I’ll spare you the quotes, but I was touched. I don’t cry easily in public, so naturally when I crawled into bed that night, out poured a pent-up weeping performance in five acts.

It’s easy to take your friends for granted. I’ve been guilty more times than I care to admit. But it’s a lot harder to do that when someone presents you with an illuminated manuscript bearing the legend “FELICEM DIEM GALENTINI” (that law degree really paid off) or a set of glittery hair clips because “You probably missed out on questionable hair accessories.” And it’s almost impossible when you realize that the people in your life don’t just accept your identity, but embrace it and actively participate in affirming it.

That’s a rarity for trans people. Even since coming out just half a year ago, I’ve seen families slowly torn apart during a transition, young trans girls left with nothing else but their trans friends to lean on, and people who’ve killed themselves rather than be alone any longer. When there are even people out there who want Jazz Jennings—who is a precious croissant of a human—to die a slow, painful death for existing, it’s easy to drown in the wave of resistance.

This isn’t to say I necessarily feel welcomed by the general populace now. Just because my friends are great doesn’t mean my gender is tolerated by most of my countryfolk, and I still live in fear that someone will clock me as trans after catcalling and become violent. I still instinctively read Facebook comments, so I know there are cis women who consider me nothing but an exhibitionist with a panty fetish. (For the record, I used to think so too, ladies. It didn’t work out.) And for all the written hugs I received that day, I also realized I have to do a better job of informing my friends about the variations of transness that exist. One of my favorite people made a comment about what’ll happen “when” I get a vagina, which isn’t a given—SRS is a dramatic procedure which not all trans folks opt to pursue and I’m not certain is for me. (To be clear: the person in question is wonderful and drew several lovely portraits of me, so I’m absolutely not calling her out. This just illustrates how pervasive some misconceptions of trans identities have become.)

But now, when the outside world gets me down and I’m forced to retreat to my cave (which has a PlayStation, so to be honest, it’s not all bad), I won’t be there alone with my dysphoria. I’ll have my friends’ words, their love on a page, to see me through. Plus, one of the notes has an adorable picture of Data on it, which is guaranteed to solve any problem that may arise.

So happy belated Galentine’s Day, every one. I hope yours was as unforgettable as mine—although I don’t really think that’s possible.