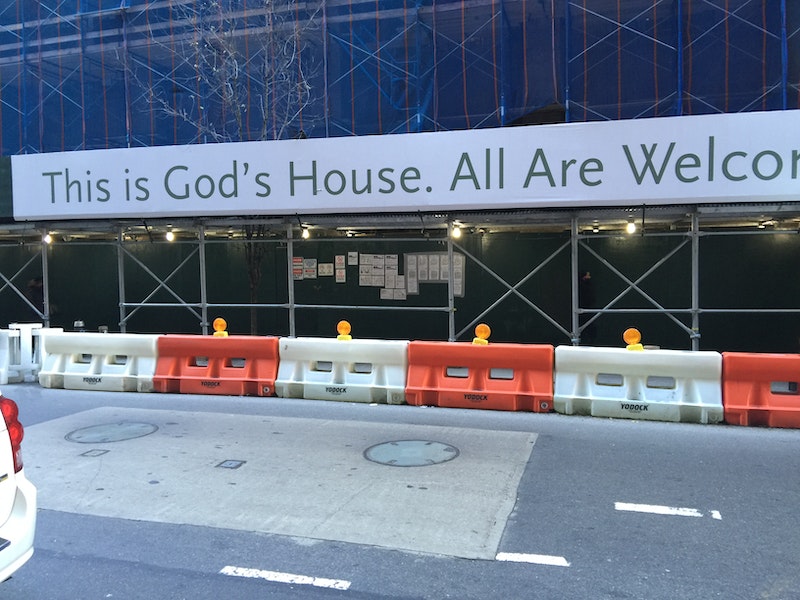 I’d stepped out of Tribeca’s decades-old Italian restaurant Ecco for a rapid-fire smoke last Monday night, ignoring the brutal wind chill while my sons Nicky and Booker were yukking it up with their cousin Quinn on a bunch of topics, including current singers that could’ve been Perry Como revivalists for all I knew. It’s worked for Tony Bennett, after all, and he’s a crummy lounge attraction.

A middle-aged lady approached me, asked for a light, and quickly started blabbing, as if in recompense for the smallest of favors. I had zero interest in her scatterbrained patter, which began with an assessment of my blue & white striped cardigan. “That’s a sweater and a half, did your mother knit it?” She continued, “You must be Irish.” The connection escaped me, but I allowed that yes, my grandparents came to America from Dublin—hers from County Clare, superior in her slurred opinion—and then wanted to know if I’d sympathized with IRA not so long ago. “No,” I replied, and she countered, “You don’t talk much, motherfucker. Are you saving it all for an 800-page novel? Buddy, the world doesn’t really need another Moby Dick.”

She was a dick, really, an unwelcome intrusion, and I returned inside, happy that an ample order of pasta with capers had arrived in my absence. The fellows, upon hearing of my four-minute adventure, guessed she was a homeless person, looking for several bucks or more cigarettes, but although fairly plastered, her attire didn’t give off that vibe. Just a nasty loudmouth, making the rounds on Chambers St., and looking for trouble. I thought of the sign outside the Peninsula Hotel (pictured above) and figured that God had no time for busybodies of her ilk, despite the 55th St. church’s cheery declaration that everyone is welcome to bask in the Lord’s goodness.

Ecco’s one of my favorite Manhattan restaurants, an old-style Italian joint—fancier than the clichéd checkered tablecloth places in 1970s mob movies—that still, for example, offers sausage and pork on the menu, and big portions, unlike the trendier spots that dress up simple spaghetti options—a dash of green, a dot of caviar—as if they’re to be admired and not eaten. Stupidly, in addition to helping myself to the gratis plate of salami rounds, olives and cheese, I tackled (and finished) an enormous veal parmigiana that spilled over the plate. Booker warned me that I’d feel awful in the morning—too much meat, which I’m no longer accustomed to—and sure enough, even though I didn’t fall asleep until one a.m., semi-engrossed in Hanya Yanagihara’s A Little Life, a novel whose acclaim eludes me, I was up four hours later, and took to the streets on a long mission to find a place that was open for coffee. Not Ecco’s fault: I could’ve gone the fish route, but just as when I’m in New England and insist on eating fried clams, gluttony got the best of me.

On the other end of the spectrum, the day before Booker and I spent some time at the Met, curiously not crowded, and witnessed a sparkling demonstration of concentration from a young Asian boy who probably wasn’t yet a teenager. There’s a meme on social media that’s made the rounds in the past year or so that shows a picture of kids sitting on a museum bench, all glued to their cells while a tour guide explains this or that painting. Truth be told, when I was young and went on junior high field trips to NYC museums, most of my classmates were bored silly, but didn’t have any electronic devices to keep their mouths shut. But this aspiring artist was all business: he was expertly copying a Caravaggio, with a set of markers at his side. We looked over his shoulder to see his sketch, a remarkable rendering, which occasioned a very brief scowl, and we could hardly blame him. Who wants nosy tourists making an inspection, even in silence, when you’re working?