That pain is proof that the transition I’m undergoing is actually working. 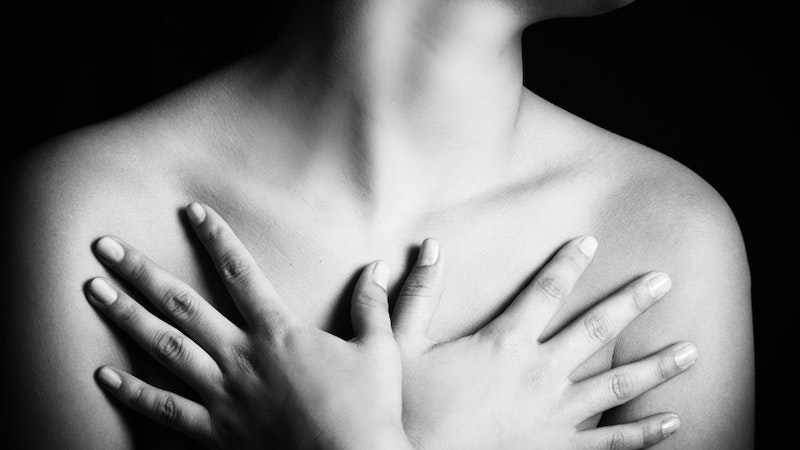 I was definitely not imagining things. This was real. My fingers shaking ever so slightly, I tapped out a message to my friend Lindsay.

A minute later came her reply: “Yeah, mine do, too. Isn’t it awesome?”

You’re goddamn right it is, Linds.

Many of my cisgender female friends and girlfriends have complained to me over the years when their breasts are feeling tender (at best) or agonizingly sore (at worst/roughly monthly intervals). While I was still adamantly convincing myself I was totally 100 percent a dude, this became something of a mantra: at least I don’t need to deal with a painful chest. To be “physically male” is to escape a great deal of physical discomfort, with the exception of any time your junk gets caught in a zipper.

But to be frank, my chest has never felt entirely masculine. Since high school, my weight has fluctuated depending on my willpower and desire for physical activity, so my pecs have usually been on the flabby side. I wrote a mediocre poem in college referencing the subject: the phrase “man boobs” came into play, which is a pretty decent laugh line however you spin it. People find the very concept of a man with tits hysterical; just ask Meat Loaf circa “Fight Club.”

Since I’ve started transitioning, though, that dissatisfaction with my chest has done a complete 180. Not to say I’m happy with its shape at present—no, I’m simply unhappy for the opposite reason: now, my tits aren’t big enough. I’m that 13-year-old girl who wishes upon stars, dead eyelashes, and 11:11 on the digital clock for bigger breasts. Hardly a day has gone by since I started hormone therapy more than a month ago when I failed to give myself a massage, to try and increase the rate of growth by a fraction of an iota. In lieu of actual knockers, I’ve adopted a bra given to me by my roommate, which contains some miracle of padding that makes the girls (who barely deserve a training bra) look halfway decent.

Naturally, my rational brain has reminded me at every turn that breast growth is, statistically speaking, one of the later changes to begin as a result of HRT. Most medical timelines put the starting point for breast growth at around six months after commencing HRT. But then again, all trans people are guinea pigs for this kind of treatment; a trans woman I know says within three months of getting on ‘mones, she had C-cups. So naturally, my hopes have been up for no good reason.

But after visiting friends for a long Star Wars weekend and wearing my bra for three days in a row for the first time, I woke up on Sunday feeling markedly different. I was distinctly aware of my chest in an entirely new way. It wasn’t tingly or really uncomfortable in that moment—it was simply there, and would not entirely be ignored. Nor did I want to. I laid in bed for longer than was reasonable, savoring the sensation, before grabbing my phone to message Lindsay and all my other trans friends I knew were online.

As the next few days went by, I documented certain new and growing feelings in my chest: the first breast knots I’d felt in more than a decade, since I went through puberty the first time. Rushing across the street with a bag of laundry shoved against my left side now felt somewhat painful. My nipples—sorry, that’s the only word for ‘em—now remain slightly pointy no matter the temperature or mood, and occasionally chafe depending on my choice of shirt.

These are all sensations that the cis ladies in my life have experienced, and when I gleefully mention them they wryly chuckle and say “Yep, that’s the pain of being a woman. Welcome to it.” I understand how utterly done my friends are with this sort of pain, and I’m pretty sure that I’ll develop the same mindset over time. But for now, I’m running across the street and grinning from ear to ear because of the discomfort I feel, not despite it. That pain is proof that the transition I’m undergoing is actually working, and that I’m not trapped in my birth body for all time. My work is bearing fruit. (Whether that fruit is an apple or grapefruit, of course, remains to be seen.)

I was raised Buddhist, a fact that surprises many new friends. One of the Buddha’s most famous teachings is the first of his Four Noble Truths: To be born is to experience dukkha, or suffering. We will all encounter painful, even agonizing, experiences in our lives. But a key component of attaining enlightenment is to accept that suffering as an experience equal to joy, love, and bliss. It’s hard to do—but when I touch my budding tits and feel a twinge of soreness, I think I start to understand.