Twenty-eight years ago at Puffy’s Tavern in Tribeca. 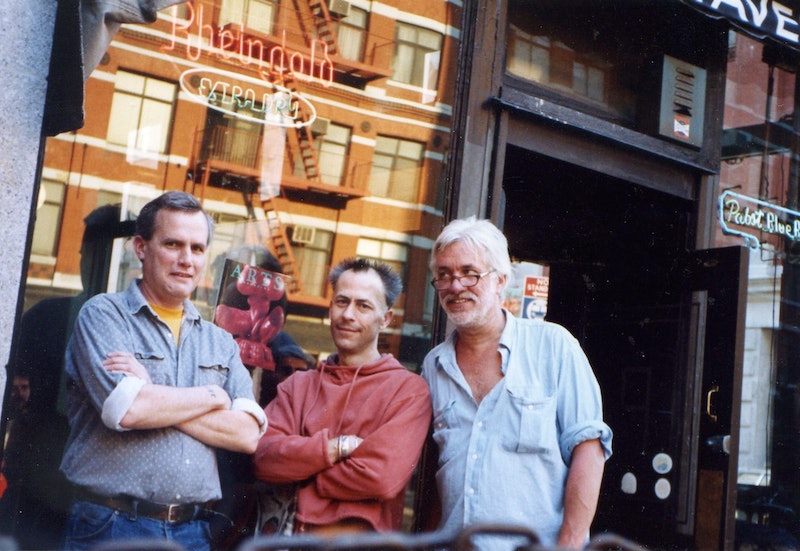 I saw a Black Friday commercial on Nov. 1 during my daily 10-minute dose of The Today Show, and it sparked—who knows why—a memory from the Christmas season of 1989. I was walking to the New York Press offices at the Puck Building from my Tribeca loft, loaded down with ornaments for the Charlie Brown tree we had for that afternoon’s annual party, and right around Lispenard St. I tripped and screwed up my knee. The blood wasn’t a problem—just used my navy blue turtleneck to wipe it up—but that left leg was throbbing.

I moved along to Lafayette St. at a slightly reduced pace, and by mid-gala, numbed by hyper-conversations, inexcusable schmoozing, and many bottles of Rolling Rock—the “it” beer of that period, as opposed to when I was a student 15 years earlier and a sixer sold for $1.50—and went home around six. Got some shitty takeout Chinese, settled in with a rental videotape of The Godfather from some long-out-of-business shop on Greenwich St., and then read a book while in bed. As a rule, I’ve never suffered from insomnia—even as a kid five minutes after my head hit the pillow I was in the Land of Nod—but that knee was barking something fierce and kept me awake. I thought perhaps two shots of tequila would do as a sedative, but no dice.

Around five that morning, I hobbled downstairs and hailed a cab to St. Vincent’s Hospital’s emergency room on 14th St., waited for an interminable spell—the gunshot and stabbing victims, appropriately, took precedence—and finally got an intern to check me out. “Hmm, I don’t think the knee’s fractured, but frankly, I wouldn’t bet my house on it.” Swell. In any case, he gave me a script for some painkillers, the name of which escapes me, and I puttered around, wrote my MUGGER column for that Wednesday’s paper, and, with some effort, walked down Hudson St. and reported to Puffy’s Tavern, the Sunday local of choice for me and a few friends.

Sundays at Puffy’s, at least before the post-9 p.m. crowd arrived, was a balm. Lots of regulars, no one drinking like a man-on-a-mission, just taking it easy and trading pleasantries with the likes of Captain Jim, Chris, and the late Steve Ouzo (pictured above), Marisol casting a hairy eyeball at whomever crossed her the wrong way, chatter with Ruthie as she combed through the then-fat New York Times, slipping quarters into the bar’s sub-par jukebox (which always struck me as weird), and settling into a booth with Michael Gentile, Julie Wilson, Anne Jackley, on occasion Don Gilbert, Michael Cohen, and Cousin Bobby, and mentally preparing for the next week. If I was on my game, the column was finished and I’d give Michael, the art director, a floppy disc.

As it happened, on this day there was also a festive Christmas air enveloping the spot, with a fairly hefty tree smack in the middle of the narrow path to the john, and customers took turns adding ornaments. Michael had made a cryptic object for the New York Press contribution, which, once decoded, slagged the owner/manager (can’t remember which) Frank, who ran hot and cold every half hour. Usually, and I never understood this, he gave NYP regulars the cold shoulder, or worse, perhaps because of something I wrote in MUGGER. Puffy’s received lots of out-and-out BJs in the paper, but one veiled barb and all the good will was down the drain. Could be, as well, that Frank was pissed we spent more time at the close-by Riverrun (closed for years now), and I suppose that’s quasi-legit.

Puffy’s was, at least back then at the dawn of the 1990s, a laid-back afternoon spot. One time, ’94 or ’95, on the Wednesday before Thanksgiving, several of us rolled in for a quick pop around six. A famous rock band was also in quiet attendance, and upon excusing myself to take a leak, the lead singer followed, and made a pass at me. It wasn’t a Kevin Spacey moment: the fellow took my rebuff in good humor, and I had a juicy story to tell my friends.

Also, in 1989, there was a Fourth of July barbeque at Puffy’s, with the gruff bartender Carl charcoaling a bunch of eels on the sidewalk—our drinking buddies Chris and Hunter watched raptly, bags of technically illegal fireworks from Chinatown in tow—which were burnt to a crisp, not that that bothered anyone up for a nosh. I’m certain in today’s Manhattan such a display would carry a stiff fine, but Mayor Ed Koch was finishing his last term and, for better or worse, most anything was acceptable. (I didn’t care for the lack of functioning street lamps, which made walks home more perilous than necessary; although to be fair, the brazen street crime, huddled homeless, and AIDS epidemic were higher priorities for Mr. How’m I Doin’?) In any case, we felt fine.