A nod to Baltimore’s Charles Villager and a rebuke of schoolmarm Ross Douthat. 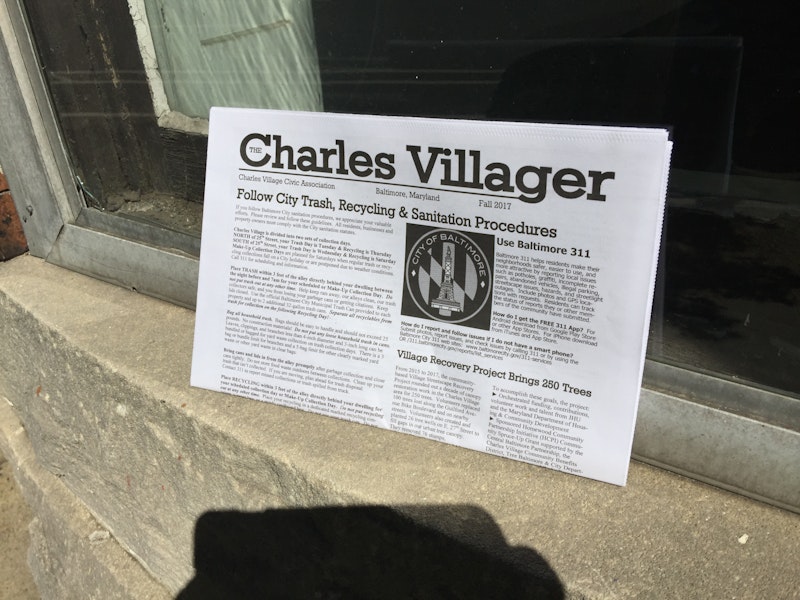 I was taken back—no excuse at this point—last week when it was announced that The Wall Street Journal is shuttering its print Asian and European editions. Inevitable, really, and I rue the upcoming press release that the Journal will discontinue its excellent Saturday paper. I suspect it won’t be long before The New York Times closes its Saturday issue as well, although that’s been a quick read for years. As some know, the Village Voice, started in 1955 by editor Dan Wolf (one of the most underappreciated journalists of the mid-20th century) and Ed Fancher, with some cash and celebrity power thrown in by Norman Mailer, delivered its last print edition. And, locally, Baltimore’s City Paper, incongruously owned for the past couple of years by the dimwits now operating The Baltimore Sun, will publish its last issue on Nov. 1. It surprises me that CP won’t maintain its relatively strong digital presence (unlike the Voice), but then I can’t make heads nor tails of newspaper managers today.

I was talking to my in-laws, visiting from Los Angeles this week (my wife’s dad Rudy has given up lashing The Los Angeles Times) and given my background they suggested it must be depressing for an old salt who was smudged in newsprint, happily, since the mid-1970s. “Not depressing,” I responded, now numb over the past decade-plus of print’s slow death, “but still disheartening.” A college classmate of mine was just laid off as the L.A. Times’ managing editor, a cost-cutting move by the troubled Tribune Co. offshoot tronc, and that was a semi-jolt, since Marc had survived so many changes. But everyone in the business has such stories: buyouts or layoffs of career journalists, shuffled off to the demeaning world of public relations or premature retirement. It’s not as if a journalist made redundant can suddenly become a lawyer, plumber or accountant overnight, not when you’re over 50.

You take your print pleasures where you can find them. For example, five times a year I pick up Baltimore’s Charles Villager, an unassuming “good-news” sheet of 12 pages, and read, or skim, every page. There’s not too much of note in the heavy-stock paper—lots of notices about trash collection (which I find helpful), parking rule changes, tidbits of news about residents of the neighborhood, ads for local businesses—but truth be told, I find more of interest in this paper than the soon-moribund City Paper, which skews to left-wing preaching-to-the-converted that doesn’t capture my interest.

I find it cheering that the Charles Villager, which began in 1981, is still alive, and, better yet, has virtually no social media presence. It’s a utilitarian paper with a tiny circulation (some 5,000 copies a year) that fills a purpose in a small area of the city. A long time ago, when I owned Baltimore’s City Paper, my partner Alan Hirsch and I looked upon any other publication as competition for advertising. Early on, in the late-1970s, there was the Baltimore edition of the successful D.C.-based music monthly Unicorn Times, and we despised that paper, not only for its journalistic boosterism, but more importantly for encroaching upon our struggling advertising base.

And just around the corner, on 25th St., a couple published the indecipherable Baltimore Chronicle, and though we were moderately friendly with the owners—comic relief, I’ll admit, since we lampooned the Chronicle to their faces, which was rude, though I don’t regret those interactions since it gave Alan and I plenty to chuckle over as we struggled to build our own paper—it was with a wary eye, since they cadged some advertisers that we couldn’t. There were other publications, too, the kind that bald-facedly “sold” content for ads, a practice that while unethical in my view, was, and is, far more prevalent than anyone will admit.

At least when I pick up the Charles Villager I know I won’t be assaulted by the kind of crap some dailies print, the latest example a thoroughly vile, and prudish, column by New York Times putative conservative Ross Douthat about Hugh Hefner’s death last week. I don’t particularly object to violating the unwritten rule that immediate obituaries mustn’t be tarnished with harsh judgments—in 2016, just a couple of days after Eagle Glenn Frey’s death, I wrote that while it was obviously sad for his family and friends, the Eagles were simply an awful band, which drew a lot of criticism—but Douthat, in painting Hefner as a purposely malevolent heathen who purportedly celebrated abortion, masturbation, women’s exploitation, and sick lifestyles, was in over his head.

Regardless of whether or not you at one time perused skin mags—now it’s almost all online—there’s no denying that Hefner’s founding of Playboy in 1953 was a publishing milestone. Not on the order of Time or The New Yorker, but in the same leagues as Rolling Stone for forging new frontiers in a quiet “conformist” decade. (When RS dies, I wonder if Douthat will criticize founder Jann Wenner for publishing, in the early days, “Dope Notes.") Douthat writes: “[Hefner’s] success as a businessman showed the rotten side of capitalism—the side that exploits appetites for money, that feeds leech-like on our vices, that dissolves family and religion while promising that consumption will fill the void they leave behind.”

I discovered Playboy at 11 or so, when a neighborhood friend showed off his father’s hidden stash of the magazines. After a few visits to this forbidden territory, the hubba-hubba wore off, as I imagine it does for most American teens and men. Douthat acknowledges that Playboy published some “good writers” but doesn’t expand on that vital part of the monthly. Just as Vanity Fair has traditionally sold its cover by featuring some celebrity of the moment to lure readers in, and maybe read their serious and long journalism (that time is coming to an end, of course), Playboy used skin as the draw. But Hefner and his editors published, and for handsome fees, fiction by Updike, Nabokov, Atwood, Clarke, Bellow, Vonnegut, and many others. It was a dream assignment for a writer: huge viewership and real cash.

And there were the interviews that sometimes made national news, such as when Jimmy Carter, in 1976, proclaimed that he “lusted in his heart.” Other prominent interviewees included: Martin Luther King, Jr., Bob Dylan, Frank Sinatra, Miles Davis, and Hank Aaron. Again, that just scratches the surface.

Douthat claims no one read the fiction, a preposterous statement. Would he say that no one read Updike in The New Yorker? No, for Douthat, Playboy—which, admittedly, forfeited relevancy a generation ago—was about jerking off, abortions, divorce, eating disorders, syphilis, and “smut addictions.” And perhaps there’s a nugget of truth in that hyperbole, but Hefner, like him or not, was a media pioneer.