We have to face a mirror. 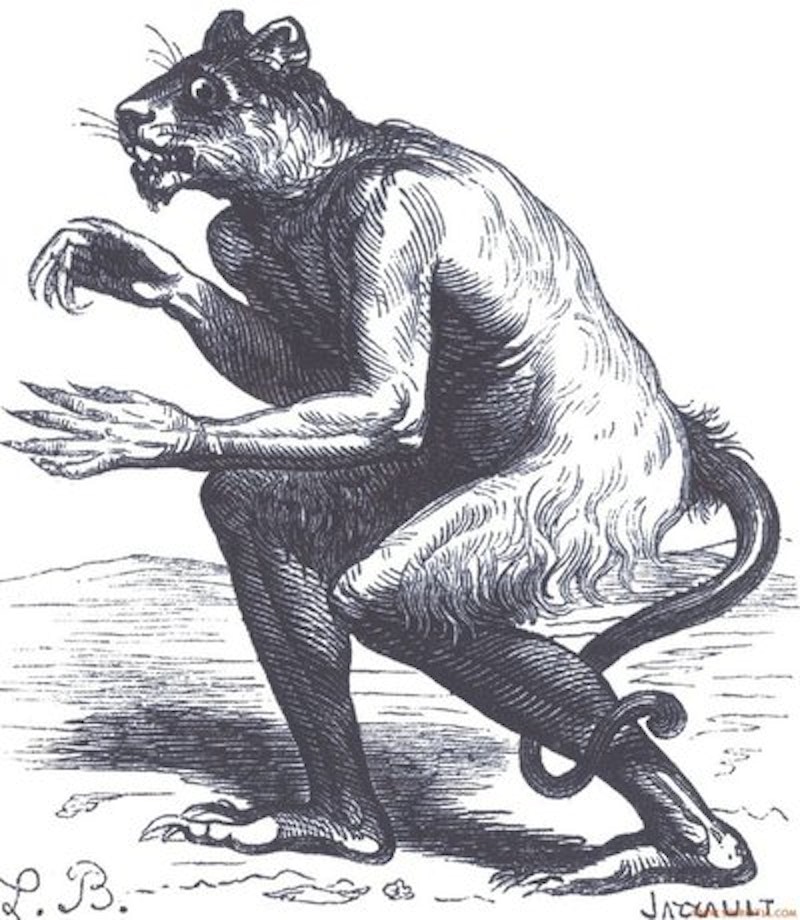 Americans have struggled to explain the latest in a string of horrifying mass murders—concertgoers, innocent school children, fast food diners, or movie theatergoers—all felled by seemingly mad men run amok. But the phenomena are hardly new. In 1521, Portuguese explorer Duarte Barbosa related a grisly scene he encountered among Javanese living in Malaysia:

“…They take a dagger in their hands and go out into the streets and kill as many persons as they meet both men women and children in such wise that they go like mad dogs killing until they are killed. These are called amuco. And as soon as they see them begin this work, they cry out saying amuco amuco, in order that people may take care of themselves and they kill them with dagger and spear thrusts.”

More than 250 years later, during voyages in the 1770s, English explorer Captain James Cook noted the same terrifying occurrence. The Malay word "mengamuk," a furious and desperate charge, was applied to this behavior. Thus was born the modern phrase and concept of “running amok,” an eruption of indiscriminate mass killing by a deranged individual.

The explorer Barbosa's 16th-century text claims the killers were men "seeking honourable death.” Some historians suggest these Amuco were elite warriors slaughtering innocent bystanders to prove fierceness. In the end they’d survive and be feared, or they’d be killed in a form of suicide.

Captain Cook explained that "to run amock is to get drunk with opium... to sally forth from the house, kill the person or persons supposed to have injured the Amock, and any other person that attempts to impede his passage."

Yet another description arises from pre-monotheistic spirit beliefs that are still practiced in the archipelagos of the Southeast Asian seas. The malevolent Hantu Belian, a tiger demon, is said to enter the bodies of men. Possessed by this force beyond their control, the mass killers are compelled to murder until they are stopped or killed. The amoks who survived their murderous rages appeared calm and normal afterwards with no memory of what they’d done. They were often accepted back into village society.

A tiger demon insanity defense, intoxication, suicide wish, the rage of wounded pride were the first explanations of amok attacks. Colonial era observers believed the murderous eruptions were limited to Asian cultures and safely filed the phenomenon under what eventually came to be called a “culture-bound syndrome”: a psychiatric condition formed and limited to a specific cultural or social group.

But it soon became apparent that such murderous attacks existed in every culture and nation: Korea, Australia, China, Laos, Scotland, India, Africa, Latin America, and… the United States.

Psychiatrists—our modern equivalents of shamans and folk healers—began identifying amok as an aberrant psychological phenomenon in the 19th Century. Since 1952, The American Psychiatric Association has listed amok in the manual of mental health professionals, The Diagnostic and Statistical Manual of Mental Disorders (DSM). Instances of amok have the meaning of a rage attack coming from a perceived slight or insult or vendetta. Later, anthropologists and then psychiatrists used the word "beramok"—a murderous lashing out arising from depression and brooding over personal loss—to describe a more common form of amok.

With worldwide reporting of tragic mass murders reaching hysterical proportions, it's important to note that amok killings are a tiny sliver of homicides. They remain a very rare occurrence. "I don't know that it's occurring more. It is reported more, better recorded with the Internet," says Dr. Manuel Saint Martin, who has studied amok for decades.

Dr. Saint Martin, one of the few scholars researching amok, is a professor and medical director at City University of New York with a law degree and a psychiatric practice in Los Angeles and New York. He has spent years doing psychological autopsies of amok perpetrators, including personal interviews of relatives, friends, and neighbors. He was among the first to suggest the amok syndrome is not culture specific. He notes that contemporary amok "is more prone in modern societies that are more anonymous. These people are mentally ill, isolated, or become isolated. In a tribe, people could intervene, behavior would be more noticed."

By an overwhelming majority, amok runners are males. It's thought that biological gender distinctions explain the difference. Aside from "Medea" mothers killing their children, only three reported American female killers in the last 35 years could be considered amok. One, 16-year-old Brenda Spencer, killed two people and injured nine in an elementary school shooting in 1979. She gave her motivation as "I don't like Mondays. This livens up the day."

In age, amok runners average 35, but killers as young as 11 have been recorded. In the United States white males are overwhelmingly prone to become amok, but worldwide amok killers come in every race and religion. Despite Captain Cook's mention of opium, drug or alcohol use at the time of the killings isn't a major factor. In order to find a supply of victims, amok perpetrators pick public locations where they can find a crowd: shopping malls, schools, restaurants, markets.

Firearms are the instrument of choice for amok runners and are most commonly used worldwide. But cases of amok have also involved arson, grenades, explosives and crossbows. While an amok attack will target family, friends, or strangers indiscriminately, beramok killers tend to familiar surroundings they know, such as workplaces or churches. Among the first to note the distinction, Dr. Saint Martin observes that a beramok killer acts from "an acute event you can pinpoint. A worker gets fired, goes back to his former employer and shoots co-workers or bosses. Frustration and anger are taken out on people."

"The beramok form of amok is probably caused by psychotic or depressive mood disorders, while the amok types are caused by delusional disorder, severe personality disorders and paranoia," Dr. Saint Martin asserts. Very few patients troubled with these disorders become amok runners. But the red light should go off when there is threatened violence, past actual violence, or suicide attempts.

Treatment for patients with these risk factors include antidepressants or antipsychotic medications combined with talk therapy that includes the help of the patient's family and social support network to lessen the patient's isolation. In the beramok situation, "that type of individual is more useful for intervention treatment" if he can be reached before acting.

It's a long way from Malaysian amuco using 16th-century daggers to Bushmaster .223 semi-automatic rifles in Connecticut and New York. "There's definitely an increase in the amount of victims in the last five years," Dr. Saint Martin says, noting that a national gun control list of potential amok perpetrators is problematical: "You'll end up with 3 million people with schizophrenia. Add bipolar with 5 or 6 million. You can't use a list like that for anything." To be added to such a list the person would have to be seeing a mental health professional to begin with, which many amok runners never do. A list would stigmatize harmless individuals who could be successfully treated and returned to a normal life.

"A combination of law enforcement and treatment can diminish the number of episodes," Dr. Saint Martin suggests. Mental health professionals should be alert to make connections when a patient doesn't exhibit violent tendencies but may nevertheless have a dangerous combination of mental disorders. But it’s impractical, unfair, and impossible to burden therapists with the responsibility for stopping amok runners.

The Aurora movie theater shooter diagnosed himself as suffering from a combination of depression and mania two weeks before he ran amok, even warning a classmate to stay away from him because he was "bad news." He had seen a school psychologist, who was alarmed enough to contact the campus police. But forcing someone into a psychiatric hospital has a lot of legal hurdles; a thicket of guidelines must be met and patient privacy is protected.

And even involuntary psychiatric treatment doesn't always work. The Virginia Tech amok runner had been briefly hospitalized and forced to undergo treatment, but was quickly released for outpatient treatment. He didn't show up and mental health professionals couldn't lawfully intervene for further psychiatric confinement.

Ideas like having 100,000 armed guards at schools to fight off a rare amok runner attacking children is like using a sawed-off shotgun to kill a mosquito. It's best to keep society's hysterical fear in check and instead expand research into the aberrant mental state of amok runners and treatments that could lower the probability of future attacks. "You can't totally eradicate" episodes of amok, concludes Dr. Saint Martin.

And so, we once again have to face a mirror, look upon our species, and realize that mass murder is a quirky, immutable part of human nature. But in such moments, it’s better to confront a machete rather than a fully automatic AK47.