Remembering my mom on the centennial of her birth. 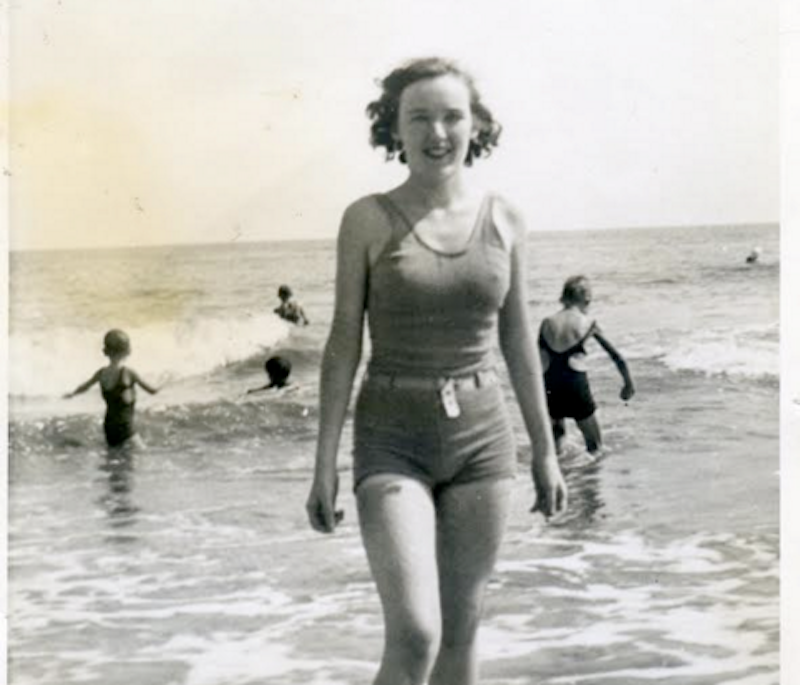 Last Friday, August 25th, was my son Booker’s 23rd birthday, and, as befits his personality, he marked the occasion with muted fanfare. A couple of presents, a weekend home in Baltimore from Manhattan to see the family, and that was about it. Booker’s birthday is the same date as my late mother’s, a coincidence that’s always tickled me—I’ve no strong religious or karma beliefs, taking the who knows approach, but nonetheless I (probably) deceive myself into thinking there’s some sort of bond there. And Booker does take after his paternal grandmother in talking a blue streak; too bad they never met and matched stream-of-consciousness conversations. I’ve no idea who, both fiercely competitive, would come out on top.

In any case, Friday also was the centennial of Mom’s birth in the South Bronx’s Irish ghetto back in 1917, the middle child of immigrants (born outside of Dublin in 1868 and 1879), neither of whom I met. (Actually, my grandmother hung on until a year after my birth in 1955, in time to dub me “Porky,” since I was a 10-pounder.) The picture above shows Mom in 1935, 18 years old, in the surf of Coney Island; a striking pose, I think, and of endless curiosity since by the time I was cognizant of the world, her hair had turned gray, just as my dad’s red hair had faded. I wrote a few weeks ago about fantastical time travel—I chose New York in 1948 as a destination for a year-long stay—and what I wouldn’t give to spend an afternoon at Yankee Stadium in the late-1920s with Mom, and my Uncles Joe and Pete.

My mother was, and this is an understatement, an eccentric woman. I’ve never met anyone like her: a bundle of energy (helpful when raising five sons), a worrywart, a top-tier schmoozer, an awful cook and lackadaisical homemaker, a stoic who was rarely sick and when the inevitable cold came along never complained, and, putting this gently and with affection, a cheapskate. She was born much too early for the feminist movement, but I think at least unconsciously, she raged at the inequality between men and women at the time. Her father was furious when she attended Hunter College without his approval, saying higher education was for men. She was bitter about the Catholic Church’s rampant hypocrisy—and changed the spelling of her name Catherine to Kathryn in protest—and then, in the late-1940s, began a 20-year career as a commercial writer, entering contests that called for jingles and slogans, and was remarkably successful. Not only did her skill at that vocation help out my family’s meager revenue stream, but my dad, brothers, and I were always very proud of her achievements. Early in the 1960s, I remember our mailman John, a buddy of mine, saying on occasion, “Looks like it was a good day for your mom, Rusty, I’m weighed down with packages!”

It’s not uncommon for children, once their parents are deceased, to gloss over the blemishes that everyone has, and I’m no exception, although as a writer I’m more inclined to bare some of Mom’s less sublime moments just because it makes for really good material. Like when, as an 11-year-old, she had me keep a list of extra-curricular school activities, stressing that college applications were just around the corner—not to me, I was 11!—and the top schools only provided scholarships for those kids who had both excellent grades and a load of resume items.

She got really pissed at me in 9th grade when I dropped off the lacrosse team after just two days, saying that would prove to be a blot. I didn’t give a shit: I was an average athlete, unlike two of my older brothers who excelled at lacrosse and soccer, and had a lot more interesting things to do at 14 than following orders from a Marine-like coach. My dad, who doted on her, was the equalizer, able to calmly discern what was important and what wasn’t, and while he didn’t brook any bad grades, my lack of a sports credential, he explained to mom, wasn’t the end of the world. I’m guessing, in retrospect, that unlike Mom, he was better at objectively weighing the strengths and weaknesses of his sons—although scholarships were just as important to him—and focused on what we did best.

Mom had an iron will, and rebounded from adversity with fortitude. As one might expect, she was a wreck when my dad died at 55 in 1972, and was inconsolable for a long time, after getting robbed of her loving partner at such a young age. Nevertheless, after nine months or so, she got up the gumption to forge ahead and took a job as a librarian at Princeton’s rare books department (we’d moved to Lawrence, New Jersey just weeks before my dad’s fatal heart attack), and, typically, made a lot of friends that helped ease her sorrow. Contacts, too: she knew a man from the nearby biology lab, Sam Tyler, who was the head custodian at that building. And after an interview with Sam, I had a summer job cleaning rat shit and feeding the experimental critters, before I went off to college in September of 1973.

I’ll never forget when she called me on a press night at the Johns Hopkins News-Letter in late 1975 to say that she’d been keeping company with a musician around her age, and that they planned to marry several months later. “But I can’t do it unless I have your blessing, Rusty,” she said in a wobbly voice. “He’s a fine man, and though there will never be another Dad, we have a good time together.” Like my brothers, I was delighted at the news, gave my unconditional endorsement, and she was greatly relieved.

The last 15 months of her life weren’t so hot: she was diagnosed with brain cancer in 1982, and was alternately scared and resigned to her fate. My brothers and I were stunned at the first news of her illness, since we figured this tough bird would hit 90 at least, but you never know when a dead man’s curve is around the bend. Yet even throughout the ordeal, there were moments of humor: visiting her at a Philly hospital one time, after a chemo treatment, she insisted that the night before she spoke with the nurse in fluent Spanish. I smiled, said of course you did, and she rambled on. She tried smoking pot for the first time, but didn’t care for it. The last time I saw her, along with my brother Gary at an end-zone nursing facility in June of ’83, she didn’t really recognize us, which was jarring. She asked an attendant for some coffee since she knew we were family, although she referred to us as her brothers Joe and Pete. It was a somber but poignant moment—she died three days later—and one I’ll take to my own grave.