Thanks be to Alfred Pancoast Boller. 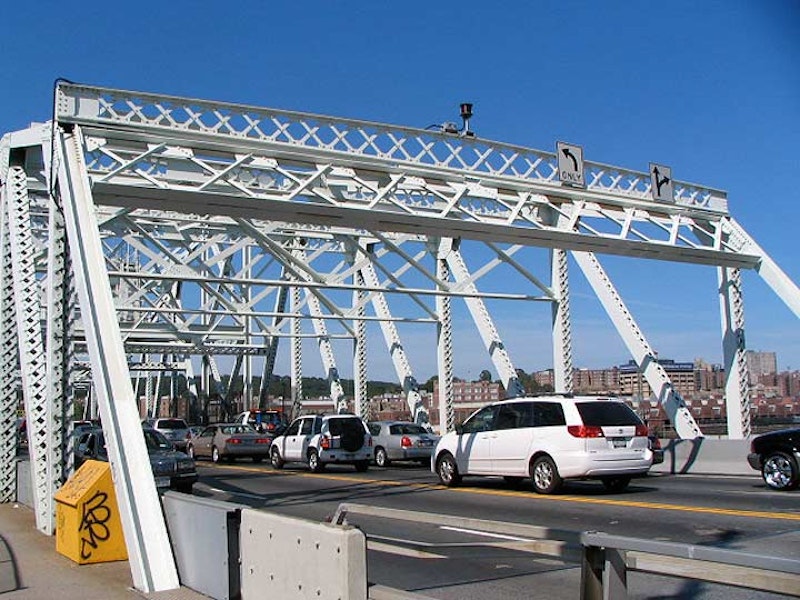 There was a great deal of deserved fanfare when the High Bridge, the oldest extant span across the Harlem River between the Bronx and Manhattan, was reopened to the public in June 2015 after at least 45 years of closure (accounts differ as to when it was first closed to pedestrians, as I have seen anywhere between 1960 and 1970). The picturesque span was constructed from 1838 to 1848 and designed by John Jervis, and was the third bridge to cross the Harlem River-Spuyten Duyvil Creek after the Kings Bridge and Macomb’s Dam, built as toll bridges during the colonial period. However, the true workhorses bringing both foot and auto traffic over the mighty Harlem are the Willis Avenue, 3rd Avenue, Madison Avenue, 145th Street, Macombs Dam, Washington, and University Heights Bridges. 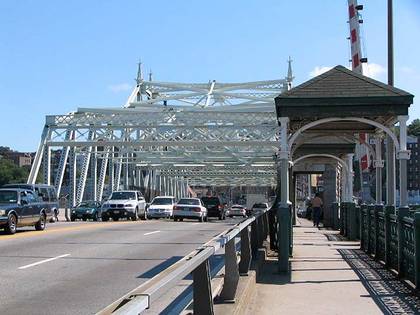 The architect behind the Madison Avenue, 145th Street, University Heights, and Macombs Dam swing spans over the Harlem was Alfred Pancoast Boller (1840-1912) and those four bridges appear to have been built using the same overall template. Boller, hailing from Philadelphia, designed the third Market Street Bridge over the Schuylkill River in that city before designing the Harlem River bridges. He also designed the second City Island Bridge, which spanned the island and mainland between 1900 and 2015, when it was replaced by a prosaic modern structure with a boring design. The Third and Willis Avenue Bridges were replaced in the 2000s by new bridges that strive to, but can’t quite match, the panache of their Boller predecessors.

The University Heights Bridge is named for the Bronx neighborhood at its eastern end and runs from West 207th Street in Inwood, upper Manhattan, to Fordham Road. As such it is a direct motor connector to Pelham Parkway, Pelham Bay Park, and the Hutchinson River Parkway. The “University” in the name refers to New York University, which once had a large campus in the area overlooking the Harlem River. Several decades ago, NYU moved out and the Bronx Community College took over the campus, which is also home to the Hall of Fame for Great Americans, featuring colonnades containing over seventy busts of men and women considered to be such by vote of a committee appointed by NYU. As Robert E. Lee and Stonewall Jackson were no longer considered to be “great Americans” in 2017, their busts have been removed from the space.

The UHB is not presently in its original location. When built in 1895 it carried Broadway over the Harlem Ship Canal, which was later engineered into the northernmost section of the Harlem River. When Broadway gained an elevated train in the first decade of the 20th century, it was decided to build a double decked bridge that would bring both Broadway and the el across the canal, and the 1895 bridge was floated south to its current location at Manhattan’s West 207th Street in 1906, where it replaced a wooden footbridge built in 1881 and removed in 1895 during the dredging of the Harlem River to make it seaworthy for Hudson-River bound vessels. After some shoring up, the UHB opened in its current position in 2008. 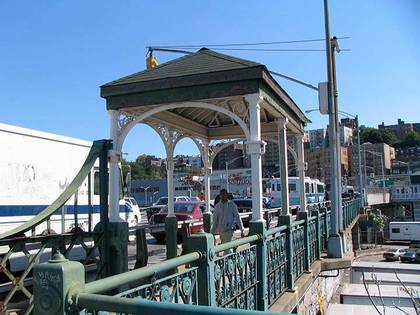 The University Heights Bridge is a creature of the Beaux-Arts era and contains elements such as the presence of a pair of covered shelters with decorative ironwork, the purpose of which seemed to be providing bustle-clad ladies with their parasols relief from the burning sun. 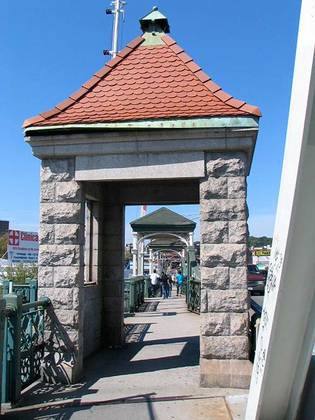 Though tolls are no longer taken on the UHB, its old stone gatehouses are still in place. Such leftovers and no longer purposeful remnants still have a role to play: they tell us about the care, sense of aesthetics, and craftsmanship that once defined the design of our public works. 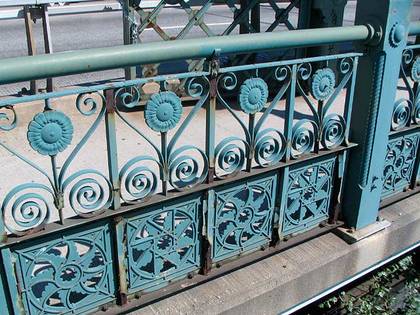 It would be nearly unthinkable to design a bridge railing with ironwork this detailed in 2017. The designs above resemble sunflowers, while there are two separate gear wheel designs on the bottom.

The 33-foot wide, 267-foot long swing bridge can be closed to traffic and swung parallel to the riverbank to accommodate the passage of large vessels. The bridge accommodates three traffic lanes (the center lane is adjusted for east or west traffic flow in the morning and afternoon) and a six-foot wide sidewalk on the south end.