Western sodomy and Zionism cannot shatter the hold of the Russian Orthodox Church. 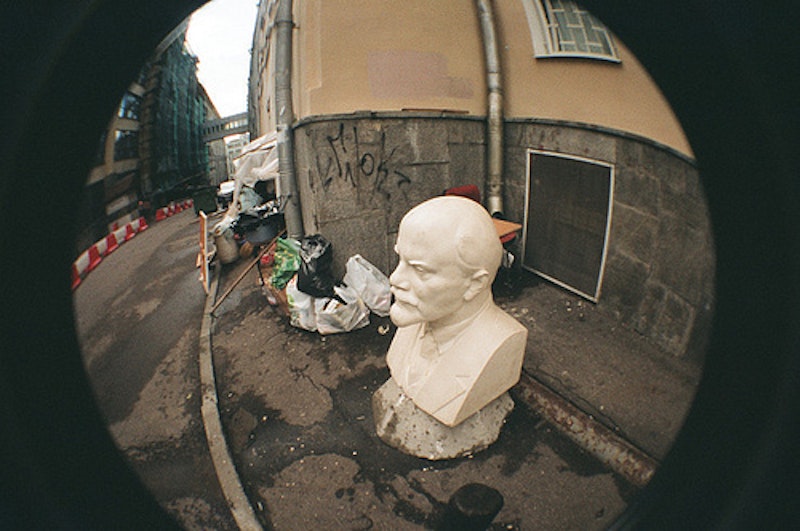 Forget my health problems for the moment: The Larison-Djerejian Initiative is going strong!

Readers will remember that this is our Indiana-based Russian Orthodox Church community’s project to raise funds for a noble goal: replacing the Lenin statues that vandal mobs in various Eastern European countries have ripped down since 1989 to demonstrate their hatred of Russia and Russians. The local Nazis illegally destroyed these monuments in defiance of the vast majorities of their countrymen, who desire nothing more than convivial relations with Holy Mother Russia, whose fraternal dominion over their countries they remember with warm feelings.

(Yes, most people in the Baltics, Poland, Hungary, Georgia, Slovakia, the Czech Republic, and Ukraine revere Russia, and remember with fondness what neo-con liars like Robert Conquest viciously slandered as Russian “imperialism” and “brutality.”)

Father Nicodemus, who has blessed the Initiative, has advised us to start with Poland, particularly Warsaw and Krakow. “The fascisto-nationalist remnants among the ‘lyakhi’ will profit from the moral instruction that the re-establishment of Vladimir Ilych in their decadent cities will bring,” Nicodemus said during his sermon on Sunday, licking his lips in that appealing way he has, running his fingers through his beard, his cheeks juggling like raspberry jelly as he snickered. What a blessing it must be to live in the state of beatitude in which Nicodemus lives! Of all the men I’ve met, it’s Nicodemus who embodies that state of “worldly innocence” of which the Orthodox theologians wrote.

“Lyakh,” I learned, is offensive “barnyard slang” for “Pole,” one of the many wonderfully pungent expressions in the peerless Russian tongue, so rooted in the sacred, scrofulous, hookworm filth of the peasantry.

Having raised $16.62 in the Initiative this month (plus a gold ring, courtesy of our nonagenarian Novosibirsk-born parishioner Igor Fyodorovich, who acquired it during an orgy of looting in 1956 in Budapest, when, as a Red Army private, he helped quell the CIA-instigated fascist uprising there), we are now tasked with the job of distributing it effectively. Distribution is the rock upon which the ship of charity most often founders. My plan is to give the money to a Polish ethnic organization here in the Midwest: the Society of Saints Casimir & Stanislaus in Indianapolis, or the Order of Copernicus in Chicago, or even the Cleveland Metro Polka Club. All these are admirable gathering places of the honest kishka-eating Polack—the Russian-loving Polack, that is, not his anti-Russian-racist cousin.

Nicodemus has been coy about my strategy. And this is associated with something worrying—a note of dissension in our church community. Galina Igorovna, another of our aged Russian-born parishoners, has been making whining noises about how Nicodemus is “mercenary,” as she puts it in her heavy accent. As far as I can make out, she suspects Father Nicodemus of coveting the money we’ve collected. She believes he desires to “embezzle” it and send it to his brother back home in the Perm region of Russia, so as to help that brother purchase a much-needed pair of prosthetic legs. Apparently Nicodemus’ brother, Lavrenrty Lavrentovich, lost both legs to gangrene after a serious beating by the Perm militia. This occurred after the wooden crate off which Lavrenrty Lavrentovich sold boiled crayfish damaged a brand-new Bentley that, to avoid traffic, had commenced driving down the sidewalk at great speed.

Furnishing Lavrenty Lavrentovich with new legs would be a worthy chore, but I’m confused by Nicodemus’ mixed messages here.

(The Russian brother’s torso is currently bolted to the undercarriage of a shopping cart stolen from Perm’s first post-Soviet supermarket. He pushes himself on it along the shoulder of the Perm ring road, selling bootleg Kazakh cigarettes to motorists, salving his raw hands in kerosene-soaked cheesecloth, exhibiting that poetic capacity for endurance for which the Great Russian is justly famous.)

The Larison-Djerejian initiative is named after two super-genius pundits who together have had a “lock” over the years on perspicacious writing on Russia and the former Soviet Union. Both are keen worshippers of Great Russian imperial state power, which, they are both clearly aware, exists in mystical symbiosis with the Holy Russian Orthodox Church (Moscow Patriarchate) and with the Blessed Russian Peasantry. Together, these three strands—state, church, and bloody, hallowed soil—form an unbreakable unity that the forces of Western sodomy and Zionism cannot shatter.