It's perched upon the shoulders of time-travel fiction giants. 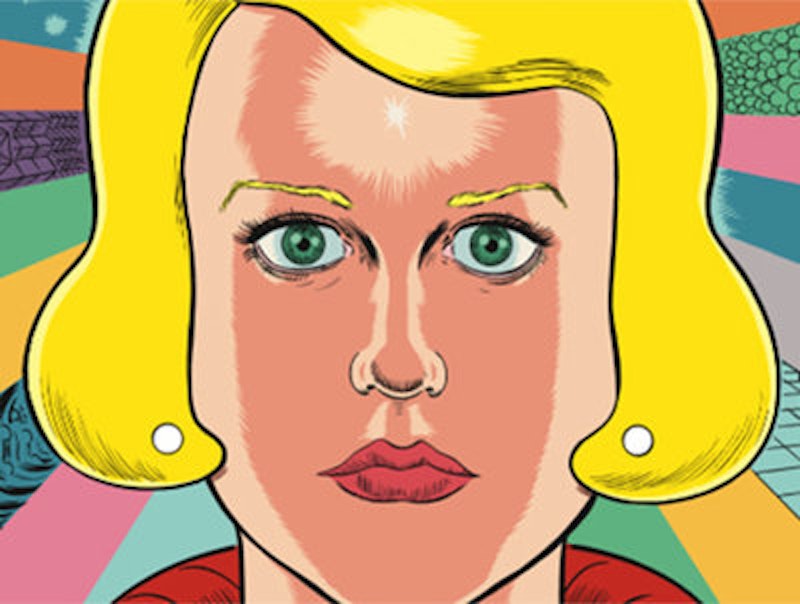 Misanthropy and narcissism are Daniel Clowes’ grand themes. No one should approach Eightball—the cartoonist’s now-mothballed comic book series—or any of his graphic novels seeking joy, uplift, or spiritual succor. This is the same myopic alley occupied by Philip Roth, Doug Allen, Todd Solondz, Noah Baumbach, Alex Ross Perry, Bret Easton Ellis, and Larry David, among many others. Clowes is hardly alone. Yet post-Eightball, his authorial sensibility began to feed back upon itself, drifting into a repetitive, negative void where winking artistic skeins couldn’t suffice as refuge or justification of intent. The Death Ray (2011), where Clowes flipped the notion of the “hero’s origin tale” on its head, was his last truly shining moment; prior to that, you’d have to reach back to 1997’s Ghost World, a graphic novel that still plays on my emotions.

When we meet Jack and Patience, the married main characters of Patience (Fantagraphics Books), they’re immediately recognizable as classical Clowes protagonists: sarcastic, self-effacing, caustically dismissive of the universe beyond their own union. The year is 2012, these twentysomethings are barely scraping by in an unnamed city, and Patience is pregnant with their first child. They’re familiar strangers, people we might be but don’t necessarily like, embittered, secretive, mildly freaked out about the future we’re all drifting into. Patience’s past is a dark mystery that Jack doesn’t want any part of; Jack (inexplicably) disguises his career spiral from Patience, in one of Clowes’ logical leaps that beggars a suspension of disbelief. The couple spend hours watching a bearded blowhard hold forth on their large-screen TV; take note of him, and of how incongruous to the couple’s financial health a large-screen TV seems.

Upon returning from work one afternoon, Jack finds Patience murdered. Jack doesn’t have much time to grieve; police finger him as a suspect, he’s briefly jailed, and an endless quest for Patience’s killer(s) consumes his waking life. Suddenly it’s 2029, with a drunken, despondent Jack narrating this tale of woe to a bar patron who wasn’t paying attention. Clowes depicts the late-2020s, with a shrug, as a context-free dystopian caricature of late-29th century Legion of Super Heroes: call girls rocking impossible melatonin hues, hazmat suits as anti-fashion, monitors that automatically provide blood-alcohol levels, visage-crumpling “hot shots,” robot taxis. The plot kicks in after Jack rescues a call girl who lets slip that one of her other customers might be a time traveler. And from there, a new obsession explodes: what if Jack could return to 2012, and prevent Patience’s murder from occurring?

Patience is Clowes’ convoluted, 180-page attempt to accomplish that; to say much more story-wise than “things don’t totally go as planned” and “Jack winds up in a handful of whens” would be wading out into spoiler territory. But, thankfully, this setup allows Clowes to tap into vital sub-themes that resonate: the resiliency of true love and the past’s ravages. As Patience rolls forward, Jack hardens into a brutal, tortured person, plagued by physiological impacts of time travel even as he’s granted a far fuller view of his late wife’s tumultuous youth. Clowes’ depictions of the cosmos closing in on Jack have a stark, harrowing quality, and feel sharper than any other illustrations. (Visually, it’s a B or a B+ overall, while the story’s an A+.) A deadpan, almost hardboiled tone reigns supreme—this is a detective novel, in a sense—and the book is well aware that it’s perched upon the shoulders of time-travel fiction giants. But what makes Patience sting and linger in memory that its violence, whirligig, and cliché-trolling is actually in service of something beyond telling a story for the sake of telling one. Narratives full of assholes for their own sakes are boring.

In Patience, Clowes serves up a narrative full of assholes that promotes self-sacrifice for an emotional ideal in the face of certain oblivion. Jack and Patience’s travails may fall slightly short of the Young Adult Lit dreaminess suffusing Becky and Enid’s Ghost World misadventures, but Patience packs a strong punch. Clowes’ day isn’t done just yet.