An Open Letter to the Sobbing Woman I Walked Home

You deserve better than him. 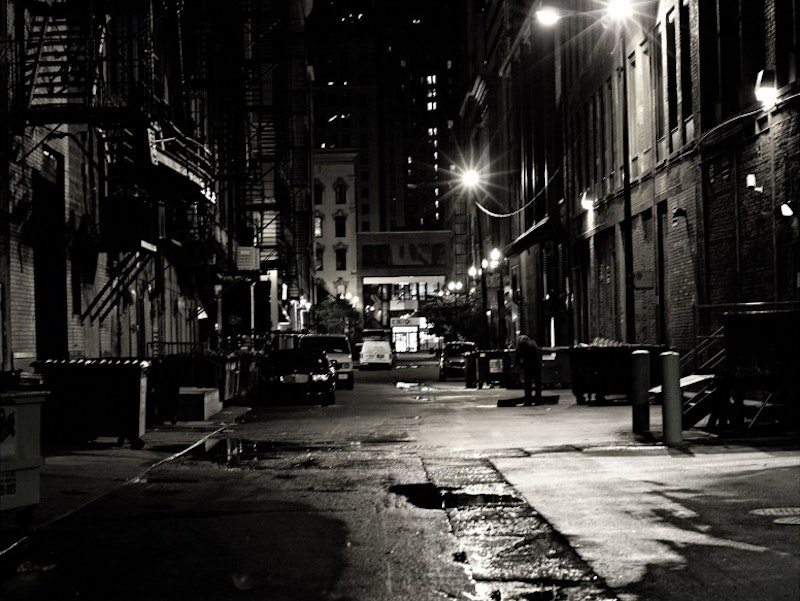 Sometime after midnight, I woke up on my friend’s couch. I’d not slept well the night before, and a day of birthday revelry had put me right out—I hadn’t even finished my final wedge of cheese before passing out across the leather sofa. Mildly mortified, I gathered my coat and shoes and made my goodbyes, striding briskly down the block to catch the bus home.

I never made that bus. As I approached my stop, I passed a man and woman having a screaming argument in the middle of the sidewalk. Well, I say screaming; the man was doing most of the yelling, while the woman tried to get around him, pleading for him to let her go home. “You can’t,” he repeated ad nauseam, boxing her out like a basketball player defending his lane. I walked past them, my body steeling up. Danger bells clanged in my head as I kept going… but moving slower with every step.

Like most New Yorkers, my instinct was not to get involved. It’s not a great idea to wade into someone else’s dispute at the best of times, let alone in the dead of night when nobody is around to help. And at the risk of making everything about my gender identity, placing a trans body in the middle of a physical altercation is just never a smart thing to do. Not that we break easily—I can take a punch—but when you’re a member of a population that’s targeted for violence in staggering proportion even to other marginalized groups, you tend to be reticent.

But then again, when that’s the background noise for the rest of your life, you tend to be prepared for a little violence here and there. I’ve clipped a pocket sized bottle of Mace to my keys so I’m never caught unarmed, and I flatter myself that I can still throw a middling-to-good roundhouse kick. When I go out, I’m not spoiling for a fight, but neither am I petrified should one find me.

So with all that buzzing in my head, I came to a halt. Fuck the bus. Turning on my heel, I stalked back up the block.

“Excuse me, is he bothering you?”

The man turned around. “Huh?”

I did something extremely foolish then, and stepped between a potentially violent man and his victim. Addressing him as one might a quarrelsome Doberman, I told him firmly that he needed to step to the side. “Let her go home.”

He either didn’t listen the first time or was too self-involved to understand, but seemed to respect me. “Tell me what I need to do,” he said, level-eyed. “Sir.”

Oh, that’s why he respected me.

We went back and forth in that vein a few times, as it became readily apparent that he was drunk. My bus passed; I barely noticed. Finally, he took a step back, and the woman and I walked away.

“What’s your name?” I asked. She dried her eyes and told me. She lived only a few blocks away. We walked together, talking about neighborhoods and the less-than-savory characters in our respective areas. Before I knew it, we were embracing, and then I was alone once more.

As I walked down to the train station, the magnitude of danger I’d just escaped hit my still-sleepy brain. Still, I wasn’t sure if avoiding it would have been any better. My biggest regret, I realized, was that I had no way of staying in touch with the beautiful, kind-hearted woman I’d gotten to know during that three-minute walk.

So here is as good a place as any to post my open letter to her: I'm so sorry. You deserve better. I hope you never pick up the phone when he calls again. You are worthy of love from someone who won’t abuse you to keep you by their side.

And hey, here’s something for him as well: you're a fucking garbage heap, and you'd better hope we never meet again. Because if we do, I will be looking for that fight.