No sweetmeats for fat American children on Halloween. 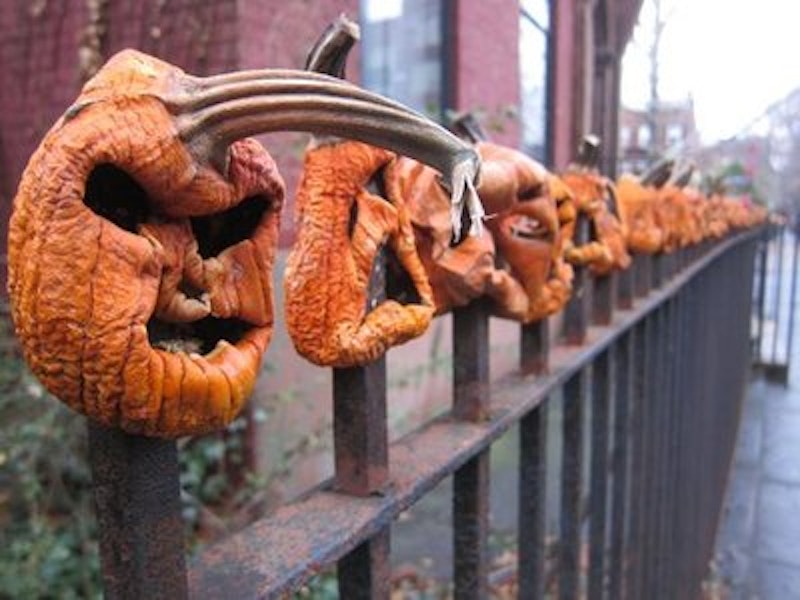 A razor blade slipped deftly into a candy apple; a Tootsie Roll bathed in rat poison—these are ways that, in an older and less frivolous America, cultural dissidents countered that blasphemous festival of paganism and high-fructose corn syrup known as Halloween.

No, I don’t countenance such methods. But come October, I am always seeking a way to fight Halloween’s evil influence. It’s a quixotic project, but I have the courage of my convictions. I know what’s right.

This year, as every year, our Benedict Option homestead will light no jack o’ lanterns, distribute no sweetmeats to fat American children. And that has stimulated the contempt of Daughter, who in her adolescent fractiousness objects to my plans to spend the evening of October 31 in communal prayer with Mother, Brother Aiden, and Sister Marie, celebrating the feasts of the Venerable Julian the Hermit of Mesopotamia and the Venerable Didymus the Blind. “I just want to be a normal family. I don’t want to be forced to masturbate to pictures of thin-lipped WASPs and the blessed Patriarch Tikhon. I want to be a normal. American. Kid. In a normal. American. Family. On. Fucking. Halloween.”

But there it is again: the depraved American obsession with onanism, not to mention the Americanist jingoism; and also the contempt for the paterfamilias in this late capitalist era in which the priest is defrocked, the temple is profaned, and all that is solid melts into air.

Daughter will spend the night of the Satanic bacchanal in Christian prayer; and I must steel myself to the persecutions of the rotten fruit of my own loins.

For we must bear the contempt of the Pharisees and the contumely of our children, and our manna shall be justification by faith in the eyes of the Almighty God, Our Lord.

More street protests in Kiev, where the Russia-hating genocidal nationalists are congregating in front of the Ukrainian parliament building.

There is a muchness about this latest in a long stream of protests by young Little Russian bastards and whores. What do they seek? “Good governance” in the Western liberal technocratic tradition? Reform of their fetid, fraudulent “country”? The “European future” that their slogans, devised by Madison Avenue perverts on the Soros payroll, demand?

No, there will be no “European future” for this trash. Or rather, there won’t be in the sense that the protestors desire it.

For suddenly, with the splendid rise of a right-wing “axis” in central Europe, an axis that now includes the newly anti-liberal Austria and Czech Republic as well as Poland and Hungary, any “European future” looks much different than it used to. The liberals’ desired future of Muslim majorities on the Old Continent, of free-market economics that benefit the New York financial cabals, of the denigration of indigenous White majorities, of the proscription of Christianity—that future is being cancelled. It will be replaced by another, cleaner European future of blood and iron. The White nations will rise up at last against their cosmopolite oppressors in a conflagration of agony and fire. Blood will flow shin-deep on the Place de la Concorde, the Marienplatz, the Grand Place of Brussels, the Dam Square of Amsterdam in the shadow of the Nieuwekerk.

In this new Europe, risen again like Christ himself, there will no diseased peoples like the Latvians, or Estonians, or Georgians, or Ukrainians to pine for a corrupt “dignity” or “nationhood” or “membership in greater Europe.” For the new, cleansed Europe will, rather than thwarting the Will of Holy Mother Russia, give it sanction, allowing Russia to act in her own interests, which are the interests of God Almighty. She will, gathering her armies, settle her debts with the traitor “nations” of her former benevolent imperialism. Like lost idiot children, those “nations” will be gathered once again behind her rough skirts—and those in them who were the authors of treason against the Holy Kremlin will know the chastisement of the sword.

In Ukraine, the River Dneiper will bob with the corpses of those who challenged Great Russian rule; so will the Daugava River in Riga, and the Neris River in Vilnius, and the River Mtkvari in Tblisi, a city that will regain its old Russian name: TIFLIS.

Oh our most holy, most pure, most blessed, glorious Lady Theotokos and ever-Virgin Mary, with all the Saints, let us commit ourselves and one another, and all our life, unto Christ our God.