Ladies and Germs, the Clown You’ve Been Waiting For 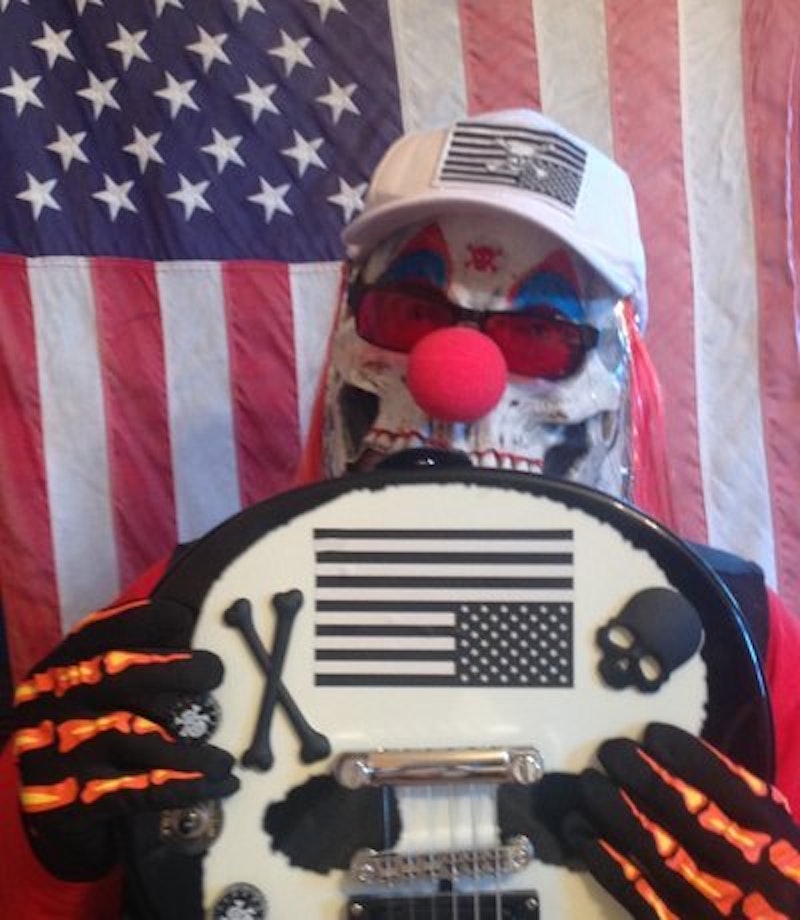 He’s not an average song and dance man. He’s not the hardest working clown in show business. Yet, he never stops working. A star of the stage, film and television, his colorful career spans over seven decades, yet Skelly Skullton keeps going. Travelling the globe entertaining royalty from kings and queens, crown princes and potentates, to citizens in Anywhere USA, across the seven continents and island territories as minuscule as Borneo and remote as Bora Bora. Loved by children of all ages. From eight to 80. He’s the man with a funny frown, that crazy clown about town, Skelly Skullton!

The following is part of an interview I had the pleasure of conducting with Skelly over a three-day bender in Baltimore. Skelly was born in Baltimore around 1920. There are no birth records and even he’s unsure of his actual age. He grew up in Dundalk and attributes his down-to-earth, no-nonsense approach to being a Baltimorean and eating crab cakes. He’s sharp, healthy and still does all his own stunts and pratfalls.

Splice Today: Please tell us the secret to your comedic success and musical genius.

Skelly Skullton: There’s no secret. That’s my secret and I’m sticking to it. If I told you then it wouldn’t be a secret. Early on, I started out as a kid, street performer. I performed for Al Capone when he was here in Baltimore, dying from dementia due to advanced syphilis. He’d throw nickels at my feet. He’d yell, “Dance, clown, dance!” I think he went crazy from all the drugs he was on. Anyway, he got me a guitar and the rest is history.

He always requested I play “Flat Foot Floozie with the Floy Floy.” He loved that song. I must’ve played that song 20 times a day for him until he passed out. Later on, after Big Al went to that big mafia place in the sky, I toured around with the wild Hi De Ho Reefer Man, Cab Calloway. What a trip that was. Oy! Don’t get me started. Because in them days we had segregation. It’s not much better now but Cab and his band, along with myself, had to stay in black-only hotels and go in the back door of everywhere we played. Because they were colored and me being a candy colored clown, and all, well there was a lot of discrimination waiting for us in whatever Podunk town we came to play at. It’s funny because we were living the high life and these backwater poor white trash folks thought they was better than us. I guess the times have changed. I don’t rightly know. I wrote that song for Dylan. The times, they are changing. It became a big hit. Huge. I mean, this scrawny kid comes to me and says, “Hey Skelly, I need a folk song.” So I slapped him around a little bit and told him to get his stuff together. He did pretty good for himself after that. I heard he just won some kind of award or something. Don’t believe the fake news. I’m telling you straight from the clown’s mouth to your hairy ear. I invented that name fake. Yeah, fake news. That’s mine.

ST: Obviously, you’re a clown in the classic sense but how do you define the skeleton attire and punk fashion sense?

SS: Like my dear brother Johnny Cash I wear black all the time. He got that style from me. When we were young, I wore black to all my shows because it hid the road dirt and spotty hygiene pretty good. He adapted it and made some kind of political fashion statement out of it. I don’t know. I was supposed to do a song with Johnny but he up and died on me.

Same thing happened with that Beatle kid John Lennon. I was in Liverpool playing a gig at The Cavern Club. In walks these four kids with mop-to hairdos and pointy boots. Lennon bops over and says, “Hey Skelly, we love your act, we’re going to America to do The Ed Sullivan Show, you should come with us.” No I says, I’m having too much fun here in gloomy old England. Ed Sullivan can kiss my clown ass. I snapped back, “Imagine there’s no heaven Johnny.” Years later he wrote that song. Imagine that. I put the bug in his ear. Yeah, it’s sad how all the good ones die young. Don’t know what happened to me though!

Anyway the skeleton costume just stuck with me, part of the act. When The Ramones were opening for me I started with the leather, but I was being a part-time S & M gimp so I had a lot of leather laying around anyway. It’s true I gave Jim Morrison those black leather pants he put on and never took off again. I got a pair from Lou Reed when I gave him that Velvet Underground band. Warhol was pissed because I invented those crazy kids down at Max’s Kansas City. I told Andy not to judge me until he walked a mile in my big clown shoes. Me and Andy just didn’t see eye-to-eye. I guess I should’ve never opened that autographed can of Campbell’s soup and ate it. But I was starving.

ST: What does the future hold for Skelly Skullton, now that you’ve done it all?

SS: Who the hell knows? You trying to be funny? Like I’m a clown? Like I’m here to amuse you? Just kidding. I gave those lines to Joe Pesci in that flick Goodfellas. I introduced Scorsese to Henry Hill, good friend of ours. But ya know clowns have been getting a bad rap. Don’t ask me why. I’m just a clown. Maybe it was that asshole John Wayne Gacy who killed and buried all those kids under his house. I don’t know. He was a shitty clown. Hung out with Nancy Reagan and that Just Say No bunch of idiots. He said a clown could get away with murder. Maybe so.

I represent the fine tradition of clowns. It may be buffoonery and foolishness but it’s not all fun and games. I had to claw my way to the top of the dung heap. Some say that’s entertainment, it’s a lot of hard knocks and dirty socks. I tell ya, lots of people are afraid of clowns. They say we’re creepy and worse but I’m here to tell you like I told Elvis. If you want to be the king then you got to pay the freight. I told him that. If you’re in Lancaster, Pennsylvania next Tuesday afternoon you can catch my act for the lunchtime crowd. I’ll be on the sidewalk playing for spare change. It will be tremendous.