Rooster reminisces about nights spent in the Chelsea Hotel. 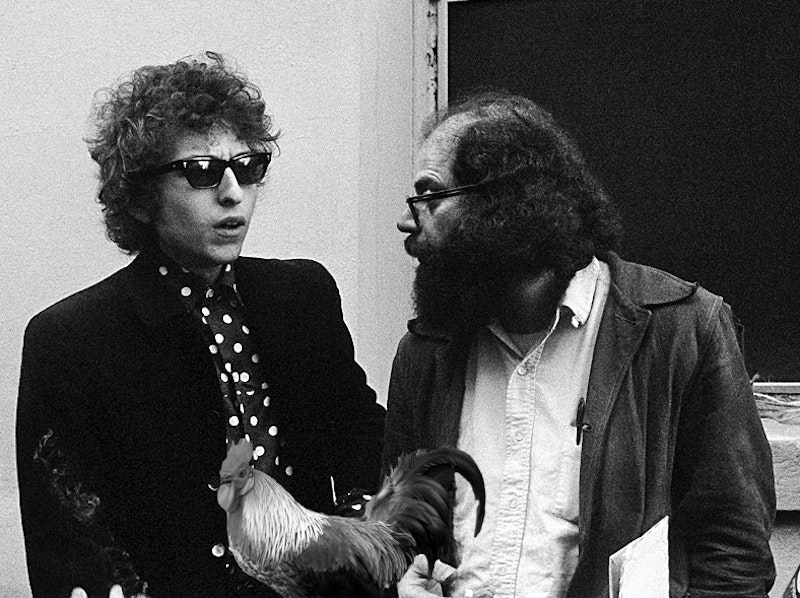 I’m not sure I can produce the onomatopoeia of the rhythmic clacking of a typewriter commanded by a speed-freak genius at the height of his powers, sitting and smoking and writing all night for weeks in the Chelsea Hotel. Yes, I knew Bob Dylan in the mid-60s. No, I’m not bragging: I go to Bilderberg and Davos, it really goes a lot deeper than you think. But for the inches I’m inclined to provide for this online magazine, I’ll let you in on some of the quirks of Bob’s process back then. He was convinced the rhythm of his typing was the driving force behind his writing: it helped his brain get on track, that bullet train burning up in speed with each masterpiece that it produced. He was a shaman and a shepherd, the meanest one you ever met. I was there when he wrote “Sad Eyed Lady of the Lowlands” all night in the Chelsea Hotel for Sara. (Smart-ass biographers say this is a myth: the song was pieced together at various locations. Were they there?) She was a bit nonplussed (yes, perplexed—not apathetic) when the song came out—they were barely speaking at that point, and Dylan refused to play it live. We smoked a hash joint and a carton of Gauloises that night, and I saw the man cry real tears, no bullshit guise or overwrought pose guarding the man who wanted to apologize to his wife and dedicate something beautiful to her. I don’t claim any credit for the words, but my presence surely had an effect on the boy, and the drugs I sold him made all that possible anyway.

Why am I bragging and name-dropping so much lately? Claiming credit for other peoples’ lives? I have to admit I’m struggling to come to terms with what’s happened to me in the past year—ever since John Boehner lost it in that restaurant at breakfast in D.C., screaming hysterically that he was going to be deported unless I “pulled some strings.” Right… as if I have any pull in this world. I’m just a floater. An avian Zelig, a footnote in a pamphlet lying crumpled in a Manhattan gutter. My wife calls this “low self esteem,” but when I get into one of my moods, I reminisce, and I forget where I am. It’s something we all have to monitor on the farm. I don’t miss a life of making appearances, hanging at the corners and edges of pivotal moments in history just to make a belated stake to the claim of greatness I was only ever proximate to.

I am returning to New York this morning against the advice of my wife and my lawyers. My team says that it is possibly the worst thing I could do right now—if I’m spotted anywhere near Trump Tower or Midtown or 5th Ave., the story spreads and I’m dead. I’m “back at it,” colluding with the gilded fascists ensconced in White House North. The President reneged on his initial wish to stay in New York for most of the workweek—so why can’t I enjoy the city without being a suspect in some conspiracy that doesn’t even exist yet? I just want to nosh and hit up some mu-zay-ums, know what I’m saying? See some fine art. Maybe catch a movie at the theater next to the Chelsea Hotel, see if I can get a room again, give Stanley a call…

Wait, what? Monica? Didn’t you say he died? Like, kind of recently?

I should get going before Monica glues my feathers together again. I’m taking the scenic route. I don’t want to, but I am. It’ll be hard, but this weathered bird is used to it all.