Performing the unpleasant work of butchery. 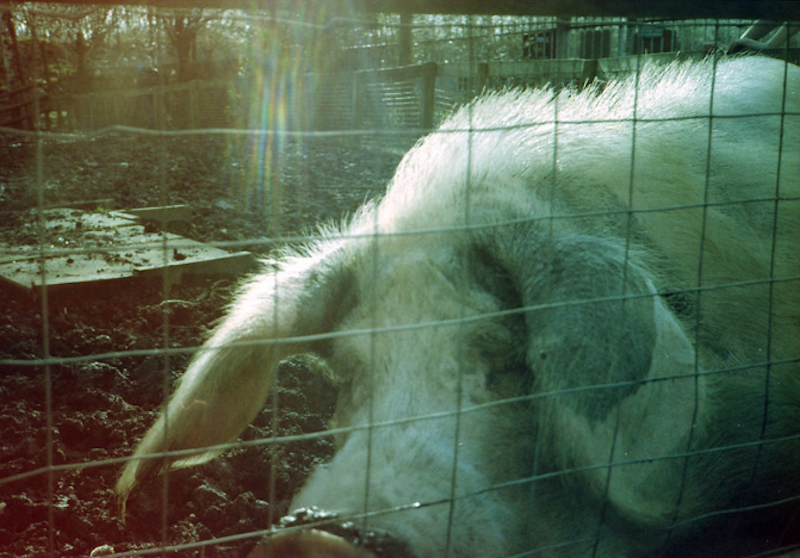 This Sunday saw the Holy Russian Orthodox Feast of the Trinity, and here at our Benedict Option community we celebrated in fine fashion. In fact, we made rather merry, going so far as to slaughter one of Brother Aiden’s suckling piglets for our repast.

We did not plan this sumptuous dinner. We—Mother, Daughter, Brother Aiden, and Sister Marie—had planned to honor the Trinity as we did last year. That is, with our usual prayers under our icons of Saint Euphrosynus of Pskov, Saint Gennadius of Novgorod, and Saint Tykhon of Zadonsk, followed by readings from the stimulating Philokalia of St. Nicodemus and from the life of one of our Orthodox Martyrs, perhaps Patriarch Hermenogenes of Moscow, or of a wonderful Russian holy idiot, like the excellent Pasha of Sarov, Fool-for-Christ of Diveyevo Convent.

Well, we certainly prayed this year, too, the four of us prostrating ourselves on Aiden’s well-sanded boards before our makeshift iconostasis. (Or three of us did, anyway—Daughter is increasingly just “going through the motions”; she shows a new unwillingness to press her lips to the floor, and her groanings of self-mortification have the tinge of the counterfeit about them.) But then, instead of moving on to our planned supper of mushrooms and boiled groats, we decadently conceived the idea of roast pork—oh, glorious repast!

You will think us rather naughty. Yet a Christian, even as he prepares every day for death, is obliged to embrace the good things in life—and a supper of roast pork, consumed in what the Jews would call “haimish” circumstances, is a good thing indeed.

A word on the actual slaughter of the young swine. As organic farmers, Brother Gavin and I are sometimes obliged to perform the unpleasant work of butchery. But never before had we had to kill an animal as small—and elusive—as this piglet. I will spare you the details, but suffice it to say that, chasing the panicked creature around the enclosure with our tire mallets, we made a rather amusing sight.

In the end, though, the beast was apprehended and met his end from a sharpened awl.

I thanked God for this Good Food and, in humility, bore the warm carcass to the rack, for flaying and disembowelment.

We were correct—maybe. It is hard to tell. But inasmuch as I can glean anything from my amateur surveillance—an ear pressed to Daughter’s bedroom door for 10 or 12 minutes several times per night—I gather Dmitry Vladimirovich has done his work well.

On the other hand, Daughter may have learned no more than to better suppress her moans of pleasure. Alternatively, she may have substituted clitoral stimulation with the petting of the labia minora. This would be a lower-impact but ultimately just as pleasurable (and spiritually murderous) technique.

By the way, Mother, who has driven Daughter to her two meetings with Dmitry Vladimirovich in Indianapolis, reports that he is, indeed, a wonderful old man. I had worried that the stroke-induced palsy that, I was told, had incapacitated the left side of his face would make communication with Daughter more difficult than it should be; and I fretted that his rudimentary English would not help matters.

But Mother has soothed my concerns. Dmitry Vladimirovich, she says, glows with spiritual, if not physical, health—a health to which his robust cackling, she says, provides ample testament.

A “bleg,” to use a word from an earlier era of our Internet culture: I am in possession of a well-made pair of sandals—my daily “go to” sandals—that require repair after near a decade of regular use. If any reader could direct me to an honest craftsman in the greater Indianapolis area who could repair this manly footwear at a reasonable price, I would be grateful. Please “tweet” me at @PaleoConDiarist.

Again, these are treasured sandals, and flattering; and I seek an honest craftsman, charging a reasonable price.