I was born into the right class. 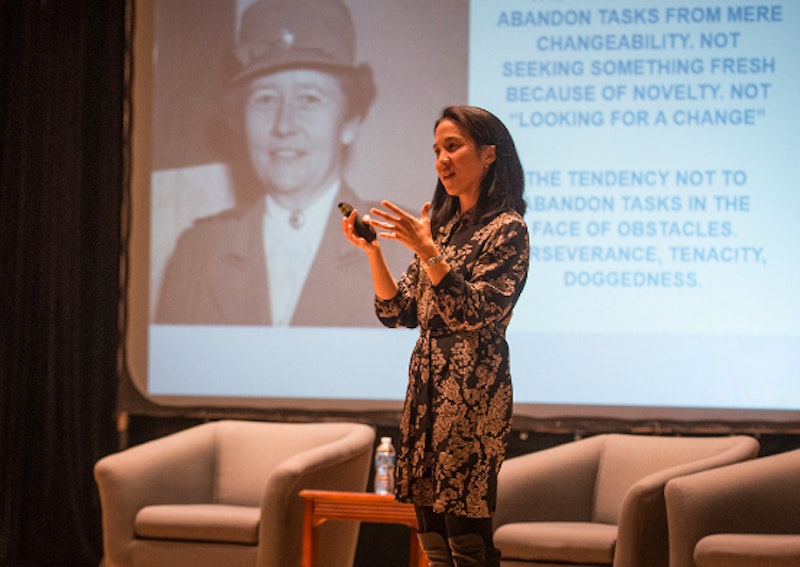 Modest talent, firm commitment; Duckworth would probably find both of those in my life story. When I first entered school, I bombed the IQ test for being placed in the honors track; I was not, according to standardized measures, very talented. But my third grade year, I had a teacher who focused on writing skills, and I fell in love. I was determined to be a writer, and eventually I succeeded. I was the valedictorian of my high school class, majored in creative writing in college, and stuck with my dream even as it became clear after school that no one was interested in publishing my poetry. I applied to MFA programs for three years, but when that didn't work out, I moved into writing criticism. And I now make a living writing, in spite of standardized testing and MFA programs both.

I'm sure Duckworth could fit my life story into a grit narrative if she wanted to. I'm less convinced. IQ test or no IQ test, my dad was a college history teacher, and my family always had tons of books around the house—I had resources and support, and it was always more likely than not that I'd do well in school. The teacher who inspired me in third grade was in England; my family spent a year in London for my dad's sabbatical that year—an opportunity most of my peers certainly didn't have. After my poetry dreams crashed, I was able to turn to freelance journalism and criticism in large part because my wife has a steady job. "Grit" in my case is less about continually striving in the face of trials and adversity, and more about having sufficient luck and resources that those trials and setbacks weren't overwhelming.

Duckworth acknowledges this to a certain extent in her book; she notes, for example, that one of the best ways to cultivate grit is through extracurricular activities. However, people living in poverty generally can't afford to enroll their children in dance, swimming, karate or band classes. "There is a worrisome correlation between family income and Grit Grid scores," she admits. Duckworth's grit test is, in part, merely yet another way to separate the rich from the poor. People with grit know they can overcome challenges because they've overcome challenges in the past: an experience you're much more likely to have if you have the material resources that allow you to keep pursuing your goal via other means if, for example, you can't get into a program in your chosen field.

Grit is, at its core, merely a re-statement of the ethos of meritocracy. People who work hard succeed, and deserve to succeed. Those who don't work hard… well, they deserve to succeed less. But as Thomas Piketty has pointed out, throughout history, in most of the world, "hard work" netted you bupkis. Jane Austen's heroines focus on marrying well rather than on a career because they know that in a stratified society such as theirs, the income from work will almost never rival the income from inherited capital.

That calculus changed some in the 20th century, as, for various reasons, return from capital decreased and return from labor went up. For a little while there, it was possible to believe that hard work would vault you into comfort. But, Piketty argues, that pendulum is swinging back again, as inequality grows wider and wider. People with more start further and further ahead; people with less start further and further behind. At this moment, as meritocracy becomes a more transparent lie, Grit isn't really a blueprint for success. It's a manifesto to assure those who have succeeded that their success was based on their rare inner qualities, rather than on being lucky enough to be born into the right class.