Unfortunately, the sexual revolution grinds on in North Carolina. 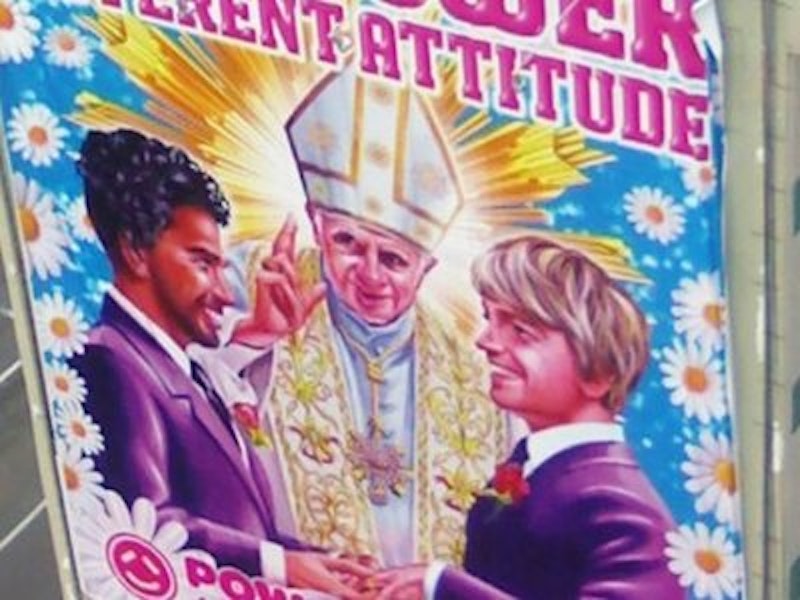 So the Pope himself has now surrendered in the battle against sexual profligacy. He has tossed his Church’s own teachings on marriage onto the trash heap, exposing himself as what he is: an invertebrate crawling on his belly through the sewer of today’s West.

As a Methodist-born convert to Russian Orthodoxy I am not primarily concerned with the doctrine of the Church of Rome. Still, as someone who defends the prerogatives of priests—yes, I can imagine a world in which priests should rule, and righteously—I am troubled. If Pope Francis is the type of priest the West now produces, perhaps I should change my opinion of priests.

Pope Francis’ abdication in this matter provides yet another indication that Europe will soon enough yield for good to its Muslim minority—the “tipping point” is coming, to use a phrase from our pop culture. I am no lover of Islam, but I will take a grim satisfaction in seeing the crescent flag fly above the statehouses of Old Europe. The rule of the mullahs will stiffen the torpid societies of our European cousins. A corrupt hedonism will die; the female populations of Paris, Brussels, Berlin, et al., will don the burqa or face the bloody chastisement of the lash.

This will prove clarifying. Better the true god, the Christian god, yes. But better Allah than the death-culture and effete narcissism of the Europeans.

Meanwhile comes news from North Carolina, where the sexual revolution grinds on, demanding that the Tarheel not only tolerate, but also affirm, sodomy. It is not a fair fight. On one hand is the North Carolina citizenry, largely white and Protestant but not entirely, disenfranchised, desiring only to live according to a traditional morality that was almost entirely accepted until, it seems, the day before yesterday. On the other hand are the horsemen of our neo-liberal moment: The capitalist oligarchs like Tim Cook, the Manhattan attorneys, the sexually indeterminate geldings of our hooting media.

In other words, here we see marshaled against Virtue nothing less than the avant garde of a modernity that has heaped victory upon victory for as long as I have been alive on my still relatively undefiled—but threatened, oh, threatened!—patch of Indiana soil.

This nexus of corporate power, social liberalism, and an American version of soixante huitard totalitarianism must be contested. But how?

I find that the answer I held until recently now seem insufficient. I have long believed that resistance lies in a coalition of those forces that, for different reasons, resist the chief poisons of our times: corporate capitalism, neo-liberalism, Zionism.

Thus I have admired the work of brave Philip Weiss—the ultimate Harvard-educated media insider—who threw his New York City magazine career away in an act of conscience, choosing to dedicate himself to building a website that doughtily chronicles the crimes of Washington D.C.’s apartheid client state in the Levant. Thus have I “crossed the aisle,” so to speak, to follow the work of the young Marxist scholar/journalist Fredrik deBoer, who writes with wit and skill on the issues that concern me. Thus have I followed the work of the bold young leftist writer Max Blumenthal, scourge not only of the Zionists, but also of the Kiev Junta.

I have had my differences with these men. But, again, we were all on the same side on the crucial issues. (I am not aware that deBoer has written on Russia, but I would assume that his heart is in the right place about that outrageously slandered country.)

Now, however, I wonder if my “Popular Front” strategy has been sound. For there can be no doubt that a Weiss, a deBoer, a Blumenthal is, whatever his virtues, also a partisan of homosexual and transgender rights in their broadest application, and thus a foe to traditional Virtue.

No, paleoconservatives such as myself have possibly been overestimating how many allies we have in our struggle. We must fend for ourselves. How exactly to take action will be the work of thinkers such as myself, in forums such as this.