Transcendence Under the Cherry Blossoms

The trees aren't the point. 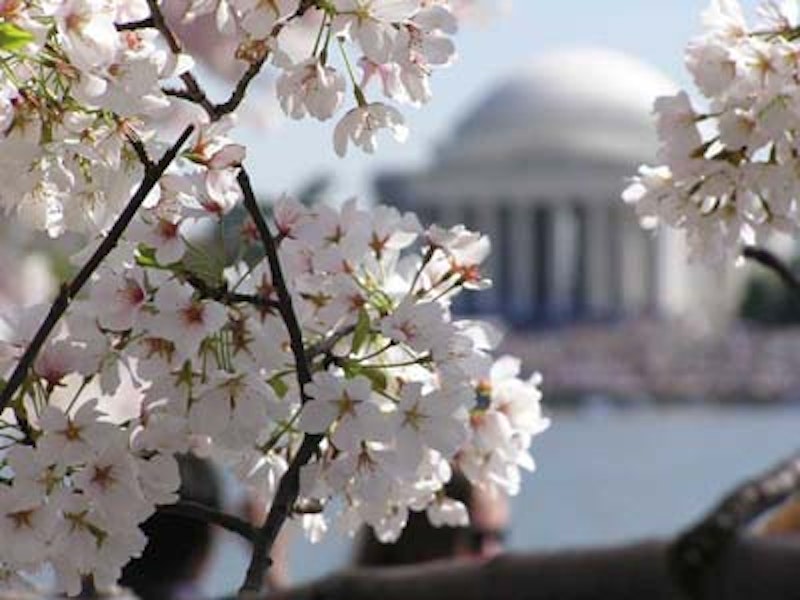 In Brooklyn, before we left for Baltimore for a musical performance with Olivia Sea Turtle, Michelle hinted that the trip might offer a stroll under DC’s cherry blossoms. I liked the suggestion because our previous hike under the trees four years ago, when we perused bouquets of pinkish-white flowers, operated a paddle boat and got day-drunk on rosé, was memorable. As planned, we performed guitar and keyboard with Olivia at La Bodega Gallery. We billed ourselves as a gospel surf band and helped Olivia with covers of Kelly Clarkson and Robyn before devolving into stoner improv for her extemporaneous poetry. After the show, Michelle and I mentioned the next day's Cherry Blossom Festival adventure to our friend Justin.

Justin drove while I read ascetic self-help passages from The Philokalia in the back of his car. We found parking on a slope in a residential area near the Tenleytown-AU Metro stop. My fury ignited when I saw more than one “Hillary for President” sign perched on suburban lawns devoid of personality. “I want to rip those things out of the ground,” I fumed. We marched uphill and pissed in a Starbucks. Treading the escalator down into the Metro, I couldn’t stop my mind from fearing the possibility of a terrorist attack such as Brussels had just suffered, or even a disruption or mechanical failure. The fare was more expensive than I remembered from my days working in DC. Cherry blossom tourists stuffed in all around us in the Metro car. A heavyset mother nearly fell in my lap when the driver slammed on the brakes. Her son sat next to me and looked amused that I was reading in this tight squeeze. His grandmother stepped on my toes before the driver screamed over the intercom, “Listen up, Metro riders! It would be prudent to get off on one of the stops before Smithsonian!” No one listened. It finally dawned on me to offer the mother my seat but she declined. The next stop was the festival.

We walked several blocks of cultural food truck overkill amid excited and stumbling blossom devotees. A barking street vendor promoted ugly festival caps and shirts. We reached a corner of the lawns and stopped under the first available white-flowered tree. A young guitarist strummed chords out of tune, without singing. The petals flaunted their fullness on the branches. I sniffed some hanging stamens, and we all brought branches down to touch.

Unlike last time when Michelle and I had come at peak bloom, these blossoms were not as tinged with pink, nor had many petals fallen like snow to the ground. This time, all the elevated flower power grabbed the spring sun and reminded me of buttered popcorn. I loved being under the trees and looking up into the sky when people weren’t bumping me out of the way with phones and selfie sticks. Coming here during the weekend for best viewing is as physically tedious as checking out Niagara Falls or the Mona Lisa. The reputed magic and wonder brought out the best and worst in people, and the latest devices for capturing the moment—to share with people not present—were ubiquitous. But then I noticed the diversity of harmonious unions happening all around me: young and old couples kissing along the Tidal Basin or up against tree trunks; plump, tired women talking and laughing and dangling feet over the ledge, somehow not cognizant of the lone duck that I decided was my spirit animal; father and son throwing a football; the drunk and fumbling paddle boats on the water; all the myriad lovers and families enjoying picnic baskets and blankets in the shade; long porta-potty lines making friends; and an unfunny stage musician with a rare pipe instrument that sounded like a bloated goose when he blew it.

I was not curmudgeonly after all. Looking within the folds of huddled masses, all through the crisscrossing waves of families, friends, lovers, cops, buskers and political hacks, under the exploding bloom canopies, and taking in the merrymakers at every periphery, including the steps of the Jefferson Memorial, I found my personal devotion, what I had come to enjoy—not trees but people. To me, the people present offered a more intriguing natural museum, but the trees helped to congregate them.