Of musical chairs and a pee-wee pornographer. 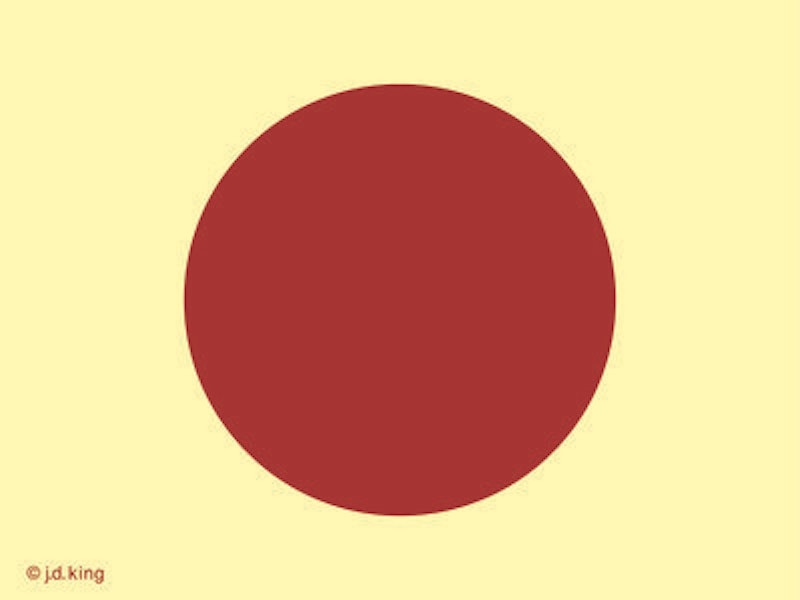 "Hey! What do you think you're doing?! Come back here! Come back with my squirrels!"

That's when he knew he was officially off the deep end, that morning a month ago, when he spotted those two ceramic squirrels atop a mailbox. Ned had pulled over, hopped out, and yanked them loose. Jogging back to his idling Corolla, one squirrel one in each hand, he heard the woman yelling.

He shouted back, "Nyze LAY-dee! Give us a kiss!"

Tires spewing sand, he was gone before anyone could get a close look at him or jot down his license number. Zipping along, sweating like the guilty man he was, he tossed the evidence out the window, heard their bodies shatter on the pavement. He wiped his upper lip, turned on the radio, cackled like a loon. His crotch was cold with sweat.

Today, a red reflector, glinting on the barn in the Kansas sun, catches his eye, triggers a childhood memory of when he thought it was ruby, like his aunt's ring. He walks toward it, then stops, his stance listing slightly by the weight in his right hand. He took a deep breath, sighed.

Since moving back home a few years ago, traction eluded him. In New York, a head copywriter at YR, he was the captain guiding USS Major Ad Campaign to Port Clio time and again. Marriage to Molly in Kinderhook, NY hadn't been a success, but it was better than living with Dad, a bore; Mom, a bitch; and older brother Duane, bloated and florid.

Duane, the merry alkie. What happened to him? He'll turn fifty this year, and his life was off to a good start. In high school he was the math whiz and honor student. Then? No college. Never moved out of the house, has never been in a relationship. Around ten every morning he drives Mom's car to town, buys a pack of Benson & Hedges and a bottle of Seagram's. At noon, Mom has sandwiches and soup prepared for us. Then Duane retires to the paneled basement to watch TV, smoke, and drink. After dinner, he goes upstairs to his bedroom, to read, smoke, drink, and listen to dusty Ray Conniff and Bert Kaempfert LPs. I don't think he ever registered to vote. When I was little, he seemed larger than life, heroic. Now? Jesus... And he never says much more than, "Say, Neddy, as long as you're up, be a good fellow and fetch me the paper?" Or, "Hey OH! You are correct, sir!"

At least he seems happy, or content, as long as a drink is in hand.

And to return here, tail between legs, to have his résumé ignored by twenty-nothings in Topeka agencies? He was an Einstein snubbed by high-school math teachers. Would it kill them to return a call, show some interest? Aren't they curious, haven't they seen my name in the annuals? We used to pore over annuals, old and new. We idolized those who paved the way for us, and we competed intensely against our peers. We shot for the stars - and hit 'em! Today I'm earthbound, a rabbit trying to leap to the moon.

He'd searched for some sort of solace at his old family church, but the new minister was a stranger, younger than Ned by at least fifteen years, and a slinger of airy homilies, commencing with a lame joke. The lamb wandered away.

Trying to reconnect with his old friends was futile. Married, occupied with children, they weren't terribly excited by his return, didn't care much about the prodigal son's triumphs or defeats. All they yammered about was Little League or taxes.

When Ned heard of last Memorial Day's big bash days after the fact, his outlook slipped from charcoal gray, gave way to the cold undertow of black.

No one thought to invite me.

I'm the one left standing in a game of musical chairs. But we can only work with what we've got. To be born into this family? My emotional legs were amputated before I could walk.

He'd known another Molly, in third grade. She sat directly behind him and would give him a little kick whenever she'd finished one of her latest drawings, always a variation on a theme: a smiling nude woman being attacked by soldiers with knives. The pee-wee pornographer, hair long and straight and pale as straw, looked as prairie-wholesome as a girl in a Sealtest ad.

The girls were so cute back then in their jeans and little sneakers, missing a front tooth. We were all cute, even chubby me, before the thief took its toll.

It'd been a rush of adrenaline when Molly signaled with that kick. With great caution, Ned reached behind, held his breath, praying that Mrs Conroy wouldn't notice. He'd feel the cool paper touch his fevered palm, sneak it into a textbook and... behold.

The following September Molly wasn't in school. Her family had moved, swallowed up by Nebraska. No doubt she continued drawing her pictures for some other lucky boy.

Eyes dry, focused on the horizon, Ned mouthed, "God damn." The business end of a .45 rested against the throb of his right temple. He squeezed the trigger, the way he'd been taught in the NRA safety course. The shot echoed between the faded red barn and the old white house. A moment later, his mother bolted out of doors, into the merciless August sun. She raced toward the mess: shrieking, shrieking, shrieking.