Pack Up Your Sorrows

A trip to Los Angeles: Cold brew malfunction, Beverly Hills hobos, the luxurious Hotel Bel-Air and a remembrance of a cherished friend. 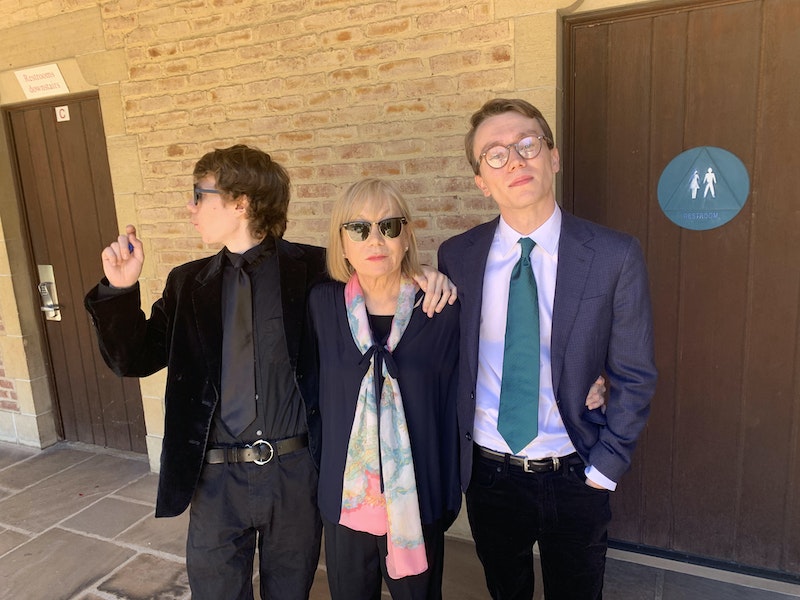 It was at the Hotel Bel-Air in Los Angeles last Friday morning, about 45 minutes after I’d polished off a large iced coffee and when I hit the rest room—like the Bel-Air as a whole, a down-to-the-last-detail ornate and enormous space—my head was running a marathon, the same feeling I had after seeing Uncut Gems in 2019, an adrenaline rush that doubles as a Top 10 movie of this century. I drink a middling amount of coffee and couldn’t figure it out; a lazy assessment was that the intense conversation with a local buddy—traversing subjects like Baltimore’s history of redevelopment and graft, arcane and juicy Nixon footnotes that grow more obscure and forgotten by the year, so many stories about films and their unknown (to me) behind-the-scenes drama and sordid behavior—was off, and it was simply was the kind of over-stimulation that’s common when traveling and keeping to the kind of tight schedule that a short stay entails. It was only on the flight home to Baltimore (via Dulles, because direct routes are getting as scarce as independent restaurants) that my son Nicky told me I’d consumed a “cold brew.” That shit’s too strong, and I don’t need a reminder of intermittent black beauty and white cross jags when I was in college in the 1970s.

Our family was in California for the funeral/memorial service for my father-in-law Rudy, who passed away last month at 84. In deference to Rudy’s private nature, I’ll keep this part short. I’d known the man for over 32 years—which made me a relative newcomer compared to the crowd of over 100 that came to pay respects at Westwood’s St. Alban’s Episcopal Church—and he was one of my favorite persons in the world (that list isn’t long, which tells you something). A doting father to my wife Melissa and her sister Gillian, and his grandchildren, Rudy and I hit it off immediately, as he’d tell me stories of attending an almost-empty Fenway Park in the late-1950s when he was a student at M.I.T. It’s not often I hear first-hand reports of seeing Ted Williams in person.

Rudy grew up in Illinois and was a lifelong White Sox fan, which is a blessing or curse, although I was delighted when his team won the World Series in 2005. We’d jabber on the phone about baseball, and when he and his loving wife Daisy made their annual pilgrimage to Baltimore, I’d get up early in the morning, and go downstairs to find Rudy manually entering statistics from the previous day’s ballgames. We’d race through a gaggle of topics, and then I’d go back to my ball & chain computer while he went out for a walk—he was engineer by trade, but also piled up advanced degrees, taught classes, was devoted to his church and charities and was a Handy Andy par excellence—to inspect the nearby Guilford Pumping Station. That interest escaped me, as does most of the mathematics/tech world, but his and Daisy’s visits—we’ve never had better houseguests—usually timed for a game at Camden Yards, were magnificent. My sons Nicky and Booker never got to meet my parents, so Rudy and Daisy were accorded well-earned exalted status. If Rudy were reading this now, he’d maybe blush and tell me to knock it off, and so I will, except to say I’ll miss him very much.

I hadn’t been to L.A. for several years, and wasn’t surprised to see that a lot of the city is still mask-conscious (for the birds, at this point), but more importantly, like New York this once-distinctive city has lost some of its luster, with chain restaurants—whether tony or pedestrian—taking the place of onetime standalone institutions. Even in Beverly Hills—where the landscaping on the streets is meticulous, sculpted like a make-believe wonderland—you can’t escape this country’s current economic malaise (a nod to Jimmy Carter, and a word that President Sippy Cup may no longer be able to define, if he ever could) as, when going outside for a smoke while eating at the glitzy Crustacean (lots of celebrities and velvet ropes, but so-so Asian grub and even worse service), I noticed five separate hobos either lying on the sidewalk or upright holding a sign asking for money as I took a stroll around the block.

Not that the water-logged dumplings detracted one iota from the company at our table, the family of an old family friend, Evan, one of the more witty and smart fellows I’ve run across in a long professional career. He’s close with my son Booker—they sup at the same capitalist well, and more power to them—and invited me on Friday to his house in Beverly Hills, an architectural marvel that would be in a “shelter” magazine if those titles still existed. Evan’s as a big a fan of the Yankees as Booker and I are of the Red Sox, and as it happened, the Evil Empire was in town that weekend. On a widescreen TV as big as a Times Square billboard, we watched the Yanks taking batting practice against Sox Triple-A call-up Connor Seabold, which wasn’t a lot of laughs. To his credit, Even didn’t gloat (although I imagine his buoyancy was diminished after the Sox comeback wins on Saturday and Sunday) and it was a wonderful early evening, the kind of visit that’s rare in my parsimonious social life in Baltimore, where I stick close to the family, and rarely entertain guests at home or the ramshackle Splice Today office in Charles Village that Nicky and I operate.

Years ago, as part of my MUGGER column at New York Press, I offered whimsical (but always accurate!) comments on the restaurants my wife and I went to twice or three times a week, often accompanied by the likes of Andrey Slivka, Sam Sifton, Michael Gentile, Kim Granowitz and out-of-town visitors such as Jim Larkin, Mike Lacey and Patty Calhoun. Snotty readers would sometimes take offense at the food talk, dismissing me as a yuppie “restaurant critic,” as if that recorded a single scratch to my psyche. The landscape has changed for me: in Baltimore, once an estimable restaurant city, the culinary canvass is blank, unless you want to break breadsticks at Olive Garden; in addition, as I’ve aged and slipped into a far more healthy dietary regimen, I can’t trust that a broiled fish won’t be slathered in butter even if I request just a spritz of lemon.

But on the occasions I travel, that routine goes out the window, and not always to deleterious effect. We ate well in Toronto and London a few years ago, and I never tire of Periyali, Il Mulino and Ecco in Manhattan. In Los Angeles last week, we had supper, after Rudy’s service, at Lulu on Wilshire Blvd., a “regenerative restaurant” that has the blessing of Alice Waters. I usually turn up my nose at farm-to-table spots, often because the self-righteous recitations by the staff is so rich that I’m transported into a noxious Gavin Newsom jail, reserved for apostates like me. But Lulu was superb, even if the choices could fit on my palm. I don’t think I’ve ever had such excellent gazpacho, and the medley of tomatoes that followed was as delicious as advertised. I rarely eat red meat, but opted for the slight slices of steak (I ignored the description of the dead cow’s habitat), a perfect dish all the better for no stomachache the next morning.

Best of all on this trip filled with melancholy but also opportunities to see friends and relatives was that we had almost no snags at getting there and back. Granted, there was no direct flight to LAX from Baltimore (another mid-sized city on the short end of airline accommodation) and we had to trundle to Dulles outside of D.C. but our fears of cancellation or onerous delays didn’t materialize. Like many people, I used to like airports and the efficiency of carriers, but now it’s a free-for-all that’s not for the faint of heart. “Greyhound of the skies” is a far, far too generous description of flying today, and I can’t imagine how those poor souls confined to wheelchairs soldier on in such a hostile environment. I suppose it’s a Sail On, Sailor predicament and there’s no way around it.