The magical realism of Margaret Keane. 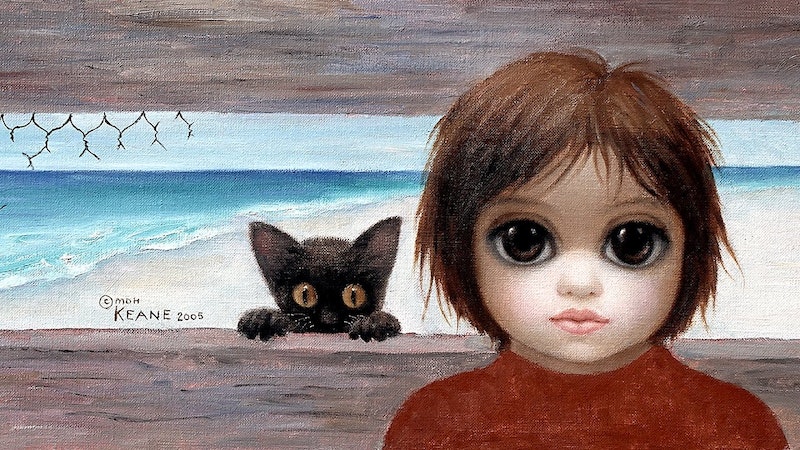 I can still see the painting of the little girl in the blue dress with the giant black eyes in my grandmother’s living room. My dad had just taken a job at an NBC affiliate news station after being out of work for more than a year. Forced to move in with my grandmother when my parents lost the house, the times were as dark as the eyes that stared back at me in that painting. But like those eyes, those times were also full of awe, especially to a four-year-old reared on art.

Every weekend, my grandfather took me to the Carnegie Museum Of Art in Pittsburgh. He didn’t explain why I only saw him on weekends when I was living in his house. Instead he introduced me to Giacometti’s impossibly thin sculptures, Edwin Abbey’s The Penance of Eleanor, Duchess of Gloucester whose colors leapt off the canvas and Warhol’s silver-screened Triple Elvis. But my grandmother’s Margaret Keane painting was the otherworldly specter that appears in my dreams to this day.

She wasn’t emotionless; she was pleading with those dark disks for help to make sense of a senseless world. I identified with her because it’s how I felt then, too. Years later I found out my grandparents divorced due to my grandfather’s infidelities, actions that caused a rift between my mother and her father that was only repaired on his death bed.

Keane passed away at the end of last month. I didn’t know anything about her personal life until Tim Burton’s 2014 movie Big Eyes came out and her biography resurfaced. The domineering husband who took credit for her work. How she proved a few times in court that she was the actual artist. How at the height of her fame she was lambasted by arrogant critics for having the audacity to be popular. For every adoring fan, she was the butt of bitter jokes. She’d defiled the art world the same way Rod McKuen defiled the worlds of music and poetry.

Andy Warhol saw through the attitude and said, “It (her art) has to be good. If it were bad, so many people wouldn’t like it.” As always it was difficult to tell where the irony began and sincerity ended with Warhol. But it made for a good quote. Though an art director/designer by trade, Warhol’s art was even more conceptual than the ads he produced. Thirty-five years after his death, people are still talking about his work, despite its popularity and deliberate commodification. His art gets more relevant with each new social media app.

In 2022, everyone can be famous, depending the TikTok length. And then forgotten just as quickly. I can’t remember one Vine video that went viral. I barely remember Vine as an app. And I’m on TikTok because of work. No one would rightly call a twerking video art, but is that only because it’s twerking or is it also because the nature of social media is transitory? What would a critic say if the twerking were part of a lengthy contemporary dance performance at MOMIX?

Keane’s art has a kind of magical realism about it. Or perhaps world building is a better choice of words. As if she concocted a different civilization (mostly children, but some adults as well) who saw and sensed things differently.

It may not be your preference and that’s okay. I don’t care for Jeff Koons. But I’m not going to take a balloon animal shit all over his work in an effort to feel better about myself. It took me a few years and a reversion back to childhood to really learn this lesson. Because If I add up the college courses continuing education and endless research for my novels, and juxtapose the adult learned me with the pre-schooler me, I was much more appreciative of the potential that all art held when I was a four-year-old. I still remember those eyes, decades later. Isn’t great art, whatever your definition of the word-art that stays with you?