Our Crossroads: Social Change and the Coronavirus

The dead walk among us right now. 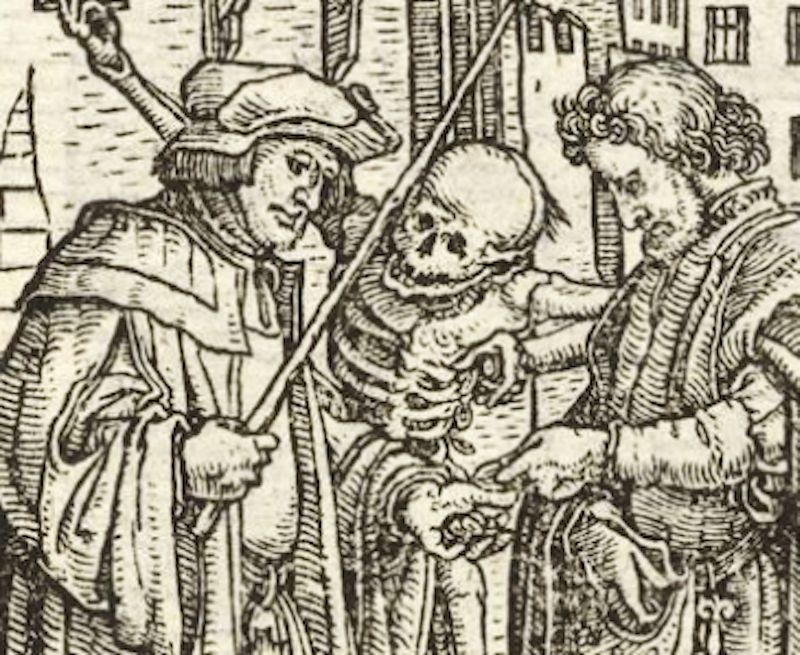 It may surprise you to learn that I’d include, among texts that have the most to say about coronavirus, Geoffrey Chaucer’s Canterbury Tales. In the General Prologue, which was written around 1392, Chaucer describes a Pardoner on his way to Canterbury:

﻿A worthy Pardon Peddler, one of the best

Of our summoner’s companions, was with us…

﻿He carried his bag in front of him, on his lap,

Stuffed to the brim with indulgences, hot

﻿He carried a cross

Of brass, embroidered with stones, and in a glass

Employing these as holy relics, he won

More money from poor farmers than the parson

Would ever receive in a pair of months.

The Pardoner is a figure of outrageous hypocrisy and greed; he’s wealthy enough to be a pilgrim himself thanks to the swindles he perpetrates on the credulous poor. It was only recently, however, that the contradiction here struck me. There’s no doubt that the farmers Chaucer had in mind are living in want of many things. But how do they come to have any money, at all, that they can spend buying holy relics? Even considered as a group, how would such people have had enough disposable income to make the Pardoner rich?

The answer takes us back 50 years earlier, to the middle of the 14th century. The Black Death swept through Europe, killing somewhere between 30 and 60 percent of the entire population. The consequences of this apocalyptic death toll would’ve been hard to predict, or even imagine, before they came about. Nonetheless, there’s a great deal of agreement, now, about what some of those consequences were. In particular, people who worked the land—medieval peasants—were empowered in an unprecedented way. There was a massive labor shortage, and as a result, peasants began to earn more money than they ever had before. Many of them became free agents, selling their labor to the highest bidder, instead of remaining indentured to the same aristocratic family for life. Some became landowners and free tradesmen.

Thanks to work by historians like R. H. Hilton (The English Peasantry in the Late Middle Ages) and Walter Scheidel (The Great Leveler), it has become possible to describe the Black Death as a tremendous boon to its poorest survivors; as a class, the peasantry became partially emancipated and much better off. They were consumers, for the first time in Europe’s history, and unaccustomed to having money. That made them easy marks for Pardoners like the one in Chaucer. But Chaucer himself is part of a counter-tradition. His smoldering dislike of such ecclesiasticals, as well as his joyful embrace of vernacular English as a literary language, aligns him with the peasantry in a more political sense. Chaucer was one of many writers who were inciting discontent with the Roman Catholic Church over the sale (and abuse) of papal indulgences. He was, implicitly, a champion of vernacular cultures. In short, his work looks ahead—but a short distance, by then—to the revolutionary changes that the Reformation brought about. While The Canterbury Tales were being written, in Henry VII’s England, Martin Luther was celebrating his 10th birthday in Hanseatic Germany.

This relationship between the Reformation and the Black Death has received virtually no attention from scholars, possibly because other events contemporaneous with the Reformation were so much more clearly entangled with it. Peasants not only became richer, and freer, as a result of the bubonic plague; they acquired, thanks to the change in their fortunes, an enduring sense of their own natural rights. It has therefore become a truism to declare, regarding Europe’s tumultuous 15th century, that when the European population began to rise again, and the labor shortage ended, the peasants resented renewed attempts by the gentry to put them back in their place. Instead, they went to war to preserve their achingly recent gains. For the most part, they lost, but not before wringing important concessions from their former masters and vastly expanding the reach of Luther’s creeds.

Once the Reformation began, nothing could keep the peasants from recasting Luther’s radical theology as a call to arms. In an important sense, the rebels understood their own relevance to Luther’s ideas better than Luther himself. For instance, Luther’s abhorrence of papal indulgences was inspired by a tremendous market for religious goods that developed because of the new affluence of the peasantry. Moreover, throughout Europe, lay clergy were replacing wealthier, more educated monks who’d been killed off by the plague. Some of these newcomers were opportunists, and pretenders, and worthy targets for Chaucer’s satire. Others exemplified the unassuming local minister, preaching in his own language, whom Luther sought to champion.

Furthermore, Luther’s emphasis on an unmediated relationship with God was both catalyst and consequence of the social mobility that Europe’s peasants, in addition to the oft-credited merchant class, had so recently discovered. The luxury of making one’s own way through the world brought with it the revelation of one’s own precious subjectivity. This was the masterpiece of the Reformation: the decay of feudal hierarchies boldly re-imagined as the plenitude of selves. Luther would spend his life translating this novel self-consciousness into Protestant doctrines. He was on the ideological edge of a paradigm shift that Europe’s former serfs died defending.

Yet the Black Death didn’t carry the seeds of freedom everywhere it went. Whether it proved “liberating,” and powerful enough to destabilize feudal power structures, ultimately depended on the outcome of the class wars that followed in its wake. Western Europe was a precarious region; fragmented by the dissolution of the Roman Empire, it had become a heterogeneous array where dissident ideologies could easily find shelter. Its relatively isolated aristocracies were often forced to negotiate with their peasants in order to have peace.

Eastern Europe, meanwhile, was more stable and intact, since much of it was ruled by the Khans. Peasant rebellions were brutally and effectively put down. The rhetoric of the Reformation, with its daggers pointed at Rome, was meaningless in the (Orthodox) East. Russia and its nearest neighbors adapted themselves to a rapidly developing, increasingly global economy just like the antebellum South: they became agricultural powerhouses, exporting their produce on a massive scale, and dependent on slave labor. Instead of gradually emancipating themselves, the poorest laborers in Eurasia found themselves caught in a trap that historian Lazar Volin calls a “gradually tightening noose of indebtedness, custom, and legislation [that] all conspired to transform the mass of the peasantry from freely contracting tenants into serfs by the end of the seventeenth century.” In other words, at the very same moment when the Enlightenment was dawning in the West, Eastern Europe was putting the finishing touches on a brutally oppressive system that would remain in place for another 200 years.

It's essential to understand, by making the connections I’ve sketched for you above, why these two halves of a single continent should’ve turned out so differently. It’s not a matter of two areas making “progress” at different speeds. The most extreme forms of serfdom didn’t crop up in rural, impoverished backwaters. The legal prison of modern serfdom was actually an innovationon the part of the Russian gentry, who received some of the richest farmland in Europe in exchange for their military service. What may appear regressive, to us, took centuries to develop and then impose on the laborers there.

When the Roman Empire dissolved, and the governments that succeeded it had to face the Black Death, the resulting chaos provided new faiths and populist movements with a unique opportunity. But it was probably only the combination of ideological leadership, economic disruption, and a widespread power vacuum that enabled unprecedented change.

It would be foolish to overstate the comparisons between those times and now. The coronavirus is paralyzing economies and suspending democratic freedoms around the globe. Yet the death toll, as horrendous as it is, doesn’t compare to that of the plague. The religious crises that shattered Western Europe, which began with a conviction that the world was ending, have no modern equivalent. We’re safer and more secure now. Furthermore, we’re post-ideological to the point of vertigo, at least in the United States; nobody considers Joe Biden or Donald Trump revolutionary, although Trump’s a formidable strategist.

Nonetheless, we’re rapidly approaching a crossroads in our public life. Our standard of living, which seemed unassailable as recently as last month, has been crippled by the COVID-19 emergency. The virus will run its course soon enough, but rebuilding the economy will take a very long time. The meaning of this event is still nebulous; it’s too new and too horrible to comprehend fully. But some educated guesses are already possible. In totalitarian states like China, the coronavirus will be indispensable in protecting the public image of the government. It’ll be exploited for public relations reasons, in order to justify increasingly brutal norms of dislocation, poverty, and surveillance.

In Western democracies, the virus will leave a puzzling legacy behind. Democratic decision-making will seem complacent and slow. The unequal death rate will embitter the poor and discredit the rich. We live, as Americans, in a nation founded on the same opportunities that transformed Europe: we rebelled during a period of unjust penury, when the standard of living dropped suddenly, and our colonial masters were especially vulnerable. At that moment, the ideology of the Enlightenment served as the touchstone of American belief. But what new and natural conception of our rights will answer to those same purposes now? What ideals will be equal to expressing what we’ve lost? What words will we use to do justice to the dead?

The dead walk among us right now. They don’t think, nor do we, about what their illness and loss will mean to the living. They are uncannily alive. The dead don’t—for now—reach out to grasp us, asking to be remembered, asking to be casualties in a war worth dying for. But they will. The contagion of their sacrifice will find us out. And we will not be ready.