Of Duckpins and Ducktails and Time

Look to the Red Guard. 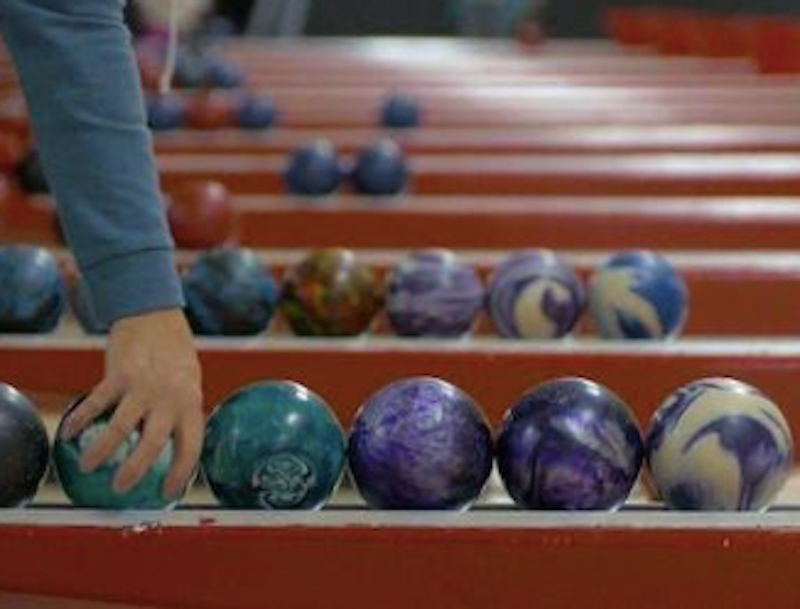 He wasn't James Dean in 1955. Or Elvis Presley in 1957. He was just your typical Middletown, Connecticut, drugstore-cowboy at Teller's Lanes, the duckpin bowling alley on the highway. He dropped a quarter in the Wurlitzer, punched some keys, and by the time his cue stick was zeroing in on the white ball, the first of three tunes, The Dixie Cups' Chapel of Love commenced, filling the smoky air with a sound of heaven.

It was 1964 and his days were numbered. Ducktails were being challenged and would be defeated by Beatle haircuts. It'd take a while, and more than a few longhairs would be roughed up, spitting bloody Chiclets onto pavement, before this thing was over.

Around the corner from Teller's Lanes, and down the road from me, lived Bobby, an older kid whom I'd see working on his Corvette Stingray in the driveway, blond hair pushed back from his eyes, clad in regulation white t-shirt and dungarees. Within a year or two he'd be dead, killed in a car crash in his beloved 'Vette. Years later, working a summer job at the local soda bottling plant, I met his cousin, Rusty. Rusty told me that James Dean had been Bobby's idol, and that Bobby predicted that his death would be the same as Dean's, a car crash.

Teller's Lanes had food vending machines where you could purchase a thin slice of frozen pizza for one thin dime, and trot it over to a primitive microwave, one of the earliest of the commercially available, and sizzle that icy slice until it was boiling, the oil and cheese bubbling. Ear to it, hear it sputter.

I loved really bad food like that. TV dinners, Twinkies, Fritos, Cap'n Crunch, and of course, McDonald's. A candy-striped franchise sprouted overnight in Middletown in the early-1960s. My food fantasy was to be trapped in the middle of a silo filled with McDonald's hamburgers (paper thin and leather tough) and packets of their French fries. The only way to freedom was to eat my way out!

At that time, their French fries had blotches on them, part of their outlaw appeal. Chirren, this was the Golden Age of the Golden Arches, before they went corporate, when they were renegades challenging all previously held notions of correct cuisine.

Rusty lost his job at the bottling plant when it was discovered that he'd been sneaking by after hours and filling his tank via their gasoline pump. I don't know how the owners detected this, but it exposed a generational rift. My parents never, ever, would've stolen anything. Nor would they have lied about anything, with the exception of a white lie to spare someone's feelings. That was the way of those who soldiered through the Depression and WWII, and the way of their predecessors. Boomers, on the other hand, were fluent in shoplifting, cheating on tests, and we could lie through our teeth with great self-righteousness. No morals; dishonesty was our lingua franca, our calling card. Maybe worth noting regarding this generational divide: Forrest J. Ackerman, the editor of Famous Monsters of Filmland, once noted that whereas the original audience for the Universal horror flicks of the 1930s hated and feared the monster, Boomer kiddies identified with the monster.

When I was in art school, in the early-1970s, I found a copy of The Dixie Cups LP in clean condition at the Providence, Rhode Island Salvation Army. I spent more time at the Salvation Army than I did in class, was on good terms with the decrepit salvaged skid-row winos working there, they were always sucking on Pall Malls, for dear life, it seemed. I should’ve been in class; I really wasted my parents' money. I'm not proud of that, by any means, but it's a fact on the face of it, part of the idiocy and flashes of (extremely mild) brilliance that make up the tapestry known as me. It's a great LP, by the by, a meeting of a New Orleans girl-group and New York's Brill Building song factory, a factory challenged only by their Midwest competition, Tamla/Motown.

On the turntable this month, that three-LP set of Smokey Robinson & The Miracles. You can keep your Rolling Uglies, boy. I'll take Smokey, The Supremes, The Temps.

I have three favorite phases of Motown. 1) When I tuned in, the early unvarnished stuff. See: “Please Mr. Postman.” 2) When they perfected the formula, everything slick and buttoned-down, pumping out the hits like Ford did Mustangs. See: “Baby Love.” 3) The concept LP, Motown all grown up. See: What's Going On. That's three distinct approaches, one blending seamlessly into the next. Today it's hard to believe that popular music could be so good, so uplifting. Then? The coin of the realm. And at all times, Motown had one foot planted rock-solid in church.

Not that I didn't love the British Invasion. Far from it. What a great time, an ideal time, to be in seventh grade, 1963 to 1964, from age 12 to 13. Start the school year at Woodrow Wilson Junior High School with the The Murmaids and The Kingsmen blaring from tinny transistors. In January get walloped with The Beatles, then The Dave Clark Five, then the UK tidal wave.

Woodrow Wilson featured a wide selection of Middletown's youth. It included the suburban kids, the rural kids, and the kids from The Village, public housing that'd been built on the far side of town, near the State loony bin, during WWII to house military families. Post-war it became home to poor families, almost entirely Negro, to use the term of that time.

In those days, most of us protected our school books with covers of brown paper from shopping bags. A start of the school year ritual: sitting around the kitchen table, cutting, folding and taping. Effete kids had store-bought book covers: bright, shiny, themed. Lackadaisical kids? No book covers. The store-bought brigade were suburban, mainly girls, the occasional sissy, the same kids whose sandwiches had the Wonder Bread crusts trimmed off. They were slightly suspect.

The first week in January of that seventh-grade year, I recall several of us sitting in the gym bleachers and a kid displayed her pic-sleeved 45 of “I Want to Hold Your Hand.” It was the first time I saw The Beatles. Martin, a Village kid, scowled and shook his head. "They fairies." He leaned back, had an expression of smelling something foul. I didn't know what a fairy was, but concluded it wasn't good. About a decade later, I'd hear that Martin had been arrested: murder, shot a guy with a .38.

In 1964, a battle line was drawn, and I enlisted as a buck private for the new team. August of 1964, the summer of A Hard Day's Night, I loved a new song, “Pretty Woman,” by some guy I'd never seen, Roy Orbison. The song was tuff! Boss! Killer guitar work hammering away with Teutonic precision. Then I saw Roy. An old guy. With a pompadour. A clod! Lost interest in that song, toot sweet.

Teens can be very dogmatic. Look to the Red Guard.

At Woodrow Wilson there were fights, bare-knuckle fistfights, in the parking lot. One kid would insult another. From the crowd, a nasal yell, "Rank!" A circle formed, no easy exit permitted from this. A group chant underscored the hopelessness of escape, "Rank! Rank! Rank!" If the ranked one didn't step up and toss a punch? Well, he'd be yellow, a fate worse than death. We'd enjoy the free show until a teacher scooted over and broke it up, dragging the two punks by their collars to the principal's office. One fight I'll never forget was in the hallway before class, two Village girls in a knock-down drag-out catfight, kicking, rolling on the Linoleum, in which one girl ripped the pierced earring out of the other's lobe. Over my shoulder a kid muttered, "Gusty! That was gusty!"

After art school, in the mid-1970s, I took karate lessons for a spell. (Don't ask. Okay, you asked. Loved me some those Bruce Lee movies at the drive-in.) We'd meet once a week and drill in the East Hartford basement of the suburban home of a fellow, ducktailed Hal. In 1969, Hal quit his factory job to open Connecticut's first comic book shop, which is where I met him. One of the karate students was Earl. Earl also maintained a ducktail, and he had a crude iron-cross tattoo on his wrist. One Friday evening, Earl showed up to class, and the ducktail was replaced by the dry look, the newscaster coif. Another one, one of the last, one of the best, had bit the dust.

I stayed in touch with Hal until his death, just a few years ago. He died with his ducktail in place.

Circa 1980, at a Chinese laundry in the East Village, there was an employee who kept his right hand in his pocket, his paw must have been deformed. He lifted heavy bags of laundry with his left hand only. He had a perfect ducktail. Asians have hair supremacy when it comes to ducktails: jet black, arrow straight. Then one day I went in and the ducktail was gone, was gone with the blow-dry wind. Alas.

Duckpin bowling is something that never really caught on. Teller's Lanes is long gone, torn down. On the same lot a new building stands. Years ago, I glanced it out of the corner of my eye, driving past. As I recall, home for something new-age.

I haven't been back to Middletown since my father died in 2015, and I doubt I'll ever be there again. Done. Not that I wouldn't mind wandering around, communing with ghosts. Twenty or 30 years ago, a favorite old neighborhood, off of Main St., one that'd been mostly Italian, some Irish, had changed. Statues of the Virgin Mary, by and large, gone. A Buddha statue seen. Maybe best to keep the memories.

One of the very last times I was in Middletown, my dad in hospice, I wandered around that hospice neighborhood, came to the house of a Woodrow Wilson Junior High classmate, Donna. She was the most beautiful girl in the school, but not the least bit stuck-up, to use the term of that time. She lived on a street that began upper-middle class, but by the time you got to her family's house, lower-middle class. How beautiful was she? Devastatingly so. Out of my league. How devastating? I don't believe I've ever quite recovered.