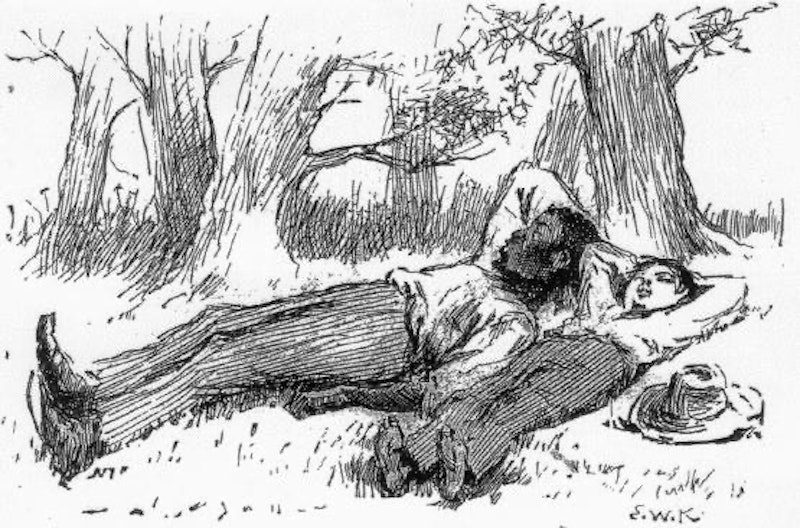 “A new edition of “Adventures of Huckleberry Finn” is missing something.

Throughout the book—219 times in all—the word “nigger” is replaced by “slave,” a substitution that was made by NewSouth Books, a publisher based in Alabama, which plans to release the edition in February… (The book also substitutes “Indian” for “injun.”)”

YOU don't know about me without you have read a book by the name of The Adventures of Tom Sawyer [offensive to people who have not read The Adventures of Tom Sawyer]; but that ain't [offensive to proponents of standard English usage] no matter. That book was made by Mr. Mark Twain, and he told the truth, mainly [offensive to Mr. Twain]. There was things which he stretched [offensive to persons injured by stretchy children’s toys, viz. “Stretch Armstrong” and their relatives and loved ones, persons unable to do Yoga], but mainly he told the truth. That is nothing. I never seen anybody but lied one time or another, without it was Aunt [heteronormative, offensive to persons living without aunts] Polly, or the widow [anti-feminist; surely the widow is notable for something other than being a widow?], or maybe Mary. Aunt Polly—Tom's Aunt Polly, she is—and Mary, and the Widow Douglas is all told about in that book [offensive to owners of the Amazon Kindle, or other e-reader devices], which is mostly a true book, with some stretchers [offensive to World War One field medics], as I said before.

Now the way that the book winds [offensive to owners of quartz and automatic watches] up is this: Tom and me found the money that the robbers [insensitive to the social forces that produce crime; reductive] hid in the cave [offensive to troglodytes], and it made us rich [class warfare]. We got six thousand dollars apiece—all gold [offensive to the economically disadvantaged; offensive to proponents and opponents of the gold standard, Glenn Beck, descendants of L. Frank Baum, metalworkers in the developing world, metal detector enthusiasts]. It was an awful sight [offensive to the blind] of money when it was piled [offensive to Americans living with piles] up. Well, Judge Thatcher he took it and put it out at interest [offensive to Americans affected by the financial crisis], and it fetched us a dollar a day apiece all the year round—more than a body [offensive to persons living with body-image dysmorphia, disembodied spirits] could tell what to do with. The Widow Douglas she took me for her son [sexist], and allowed she would sivilize me [offensive to persons from traditional cultures, English grammarians and orthographers]; but it was rough living in the house all the time [offensive to homeless persons], considering how dismal regular and decent the widow was in all her ways [offensive to regular and decent people]; and so when I couldn't stand it no longer I lit out [encourages truancy]. I got into my old rags and my sugar-hogshead again [offensive to the badly dressed, and to persons who have been injured by sugar-hogsheads, hogs, diabetics], and was free [inappropriate in a narrative that addresses slavery] and satisfied [offensive to the Greek mythological figure Tantalus]. But Tom Sawyer he hunted [violent; offensive to hunters and animal rights activists] me up and said he was going to start a band of robbers, and I might join if I would go back to the widow and be respectable [offensive, encourages youth violence]. So I went back [offensive to persons with small buttocks who desire larger buttocks].

The widow she cried [offensive to Molly from William Gibson’s Neuromancer, who is unable to cry] over me [offensive to children and the height-challenged], and called me a poor lost lamb [Biblical allusion is offensive to non-Christians; also offensive to Christians], and she called me a lot of other names, too [insensitive to victims of childhood bullying], but she never meant no harm [offensive to persons named Harmony who do not use the diminutive “Harm”] by it. She put me in them new clothes [offensive to persons who cannot afford new clothes, [offensive to persons who cannot afford new clothes, persons living with vestiphobia] again, and I couldn't do nothing but sweat and sweat, and feel all cramped up [offensive to owners of children’s clothing stores, persons with disordered perspirations, persons who are locked in a cabinet]. Well, then, the old [ageist] thing commenced [offensive to Americans who are unable to attend their college or university commencement ceremonies for financial, health or logistic reasons] again. The widow rung a bell [offensive to the deaf, families without bells] for supper, and you had to come to time. When you got to the table [culturally insensitive to persons who do not eat at tables or who eat while walking around like in that Hot Pockets commercial] you couldn't go right [offensive to left-handed and ambidextrous persons] to eating [offensive to persons living with bulimia], but you had to wait for the widow to tuck down her head and grumble a little over the victuals, though there warn't really anything the matter with them,--that is, nothing only everything was cooked by itself. In a barrel of odds and ends it is different; things get mixed up, and the juice kind of swaps around, and the things go better [offensive to observant Christians and bland cooks].

After supper she got out her book and learned me about Moses and the Bulrushers, and I was in a sweat to find out all about him; but by and by she let it out that Moses had been dead a considerable long time; so then I didn't care no more about him, because I don't take no stock in dead people [offensive to Jews, Christians, Muslims, necrophiliacs, Biblical scholars, present-day inhabitants of the Middle East, the bereaved, persons named Moses].

Pretty soon I wanted to smoke, and asked the widow to let me. But she wouldn't. She said it was a mean practice and wasn't clean, and I must try to not do it any more. That is just the way with some people. They get down on a thing when they don't know nothing about it. Here she was a-bothering about Moses, which was no kin to her, and no use to anybody, being gone, you see, yet finding a power of fault with me for doing a thing that had some good in it. And she took snuff, too; of course that was all right, because she done it herself [offensive to smokers, non-smokers, health advocates, orphans, snuff manufacturers, opponents of snuff manufacture].

Her sister, Miss Watson, a tolerable slim old maid, with goggles on, had just come to live with her, and took a set at me now with a spelling-book [offensive to obese people, thin people, people with eating disorders, people with impaired vision, single women, the illiterate, dyslexic persons, advocates of non-standard spelling]. She worked me middling hard for about an hour, and then the widow made her ease up. I couldn't stood it much longer [offensive to seated persons who are unable to stand or do not wish to stand]. Then for an hour it was deadly [offensive to persons who have ingested lethal poisons] dull [offensive to itinerant knife-sharpeners], and I was fidgety [offensive to Americans living with ADHD]. Miss Watson [Offensive to Sherlock Holmes fans and to Sienna Miller] would say, "Don't put your feet up there, Huckleberry;" and "Don't scrunch up like that, Huckleberry—set up straight;" and pretty soon she would say, "Don't gap and stretch like that, Huckleberry--why don't you try to behave?" [heteronormative, valorizes child abuse] Then she told me all about the bad place, and I said I wished I was there [egregious; valorizes sass]. She got mad [offensive to persons living with mental illness] then, but I didn't mean no harm. All I wanted was to go somewheres; all I wanted was a change, I warn't particular. She said it was wicked to say what I said; said she wouldn't say it for the whole world; she was going to live so as to go to the good place [offensive to Satanists]. Well, I couldn't see no advantage in going where she was going, so I made up my mind I wouldn't try for it. But I never said so, because it would only make trouble, and wouldn't do no good [encourages dissimulation, offensive to atheists].