I Flicker Therefore I Am

Digging into the relationship between philosophy and film. 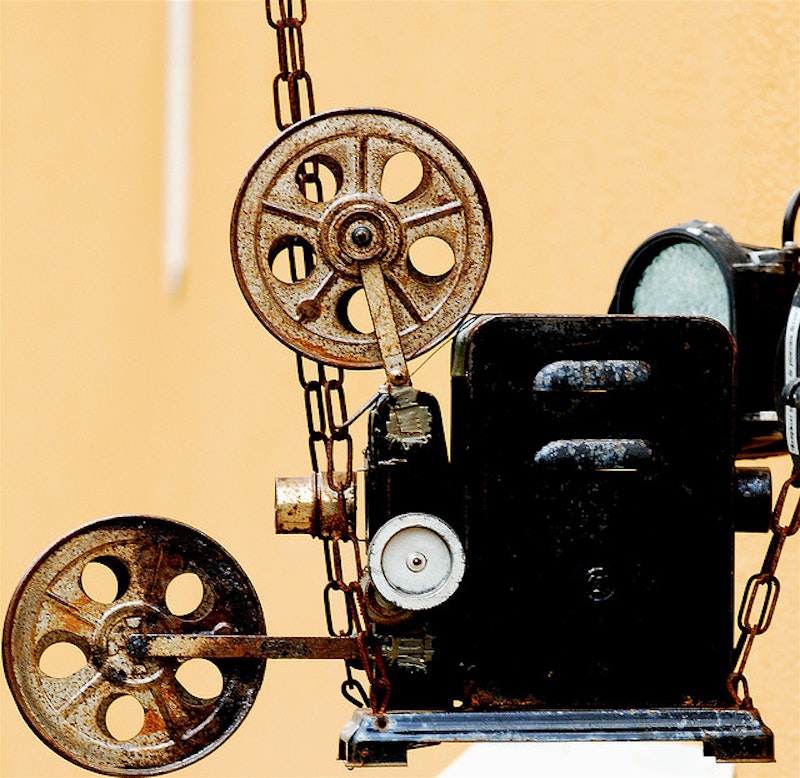 A substantial portion of Descartes’ Discourse on Method is devoted to explaining why discussing his ideas with other thinkers would be useless. Instead, he concludes, his interlocutors could best contribute to the advancement of knowledge not by talking to him, but by “contributing to defray the expenses of the experiments that might be necessary.” Don’t criticize; just send money.

Which just goes to demonstrate that, from the beginning of modern Western philosophy, philosophers have not held a very high opinion of criticism, language, or philosophy. Descartes denigrated philosophical discourse in favor of experiments; Kierkegaard denigrated it in favor of faith; and now John Mullarkey denigrates it in favor of film.

Mullarkey’s monograph, Philosophy and the Moving Image: Refractions of Reality, recently released in paperback, is an extended, often philosophically abstruse attack on philosophy in general and the philosophy of film in particular. His argument, for all its technical detail, is a familiar one. Philosophers, he says, start with transcendental ideas and then force reality (or film) to fit. As Mullarkey insists:

“[…] if film is to philosophize for itself, then we must first of all attempt to get away from any prior philosophical definition of thinking, and, indeed, of philosophy too.” (128)

The idea that film should philosophize for itself is one of Mullarkey’s key points. He argues again and again that a philosophy of film must be a philosophy thought by film, rather than one applied to film from outside. Instead of learning from film, or allowing film to speak, he says, philosophy reduces film to illustrations. He starts his book by looking at popular introductory texts like The Matrix and Philosophy or The Philosophy of Martin Scorsese. These studies use film as a “pedagogical tool;” Neo illustrates ontological dilemmas or Taxi Driver illustrates ethical ones. “But whether [the films] offer us any new philosophy as such remains moot,” according to Mullarkey. [17]

And that mootness is, it turns out, applicable not just to introductory texts, but to the biggest, baddest names in film philosophy as well. Slavoj Zizek does not learn anything new from Hitchcock; he just uses him to illustrate Lacan. David Bordwell does not learn anything new from Hollywood cinema; he just uses it to illustrate cognitive science.  And so on through Deleuze, Cavell, Badiou and a host of others; inevitably, the philosophy they find in the film is the philosophy they bring to the film. It’s the same old philosophy of words and books and transcendental ideas. None of it is ever sufficiently sparkly and new.

We are doing philosophy, in other words, when our relations (with politics, with film, with wine) give rise to a new philosophy, to new thinking, rather than simply offering reflective mirrors for ready-made philosophy or thought. […] Philosophy is not of the new, it is the new—in its struggle, in its shock, and its wonder. Which is not to define it at all in terms of "the new" (as if we knew what that meant), but only to say that philosophy is perpetually indefinite and resists definition.

It is new in at least one way, of course—nobody has ever put those words together in quite that order before. Mullarkey’s paragraph is not “new” in a transcendent sense; idiots have been earnestly employing originality as a club since the first caveman bashed proto-Quentin-Tarantino on the head for his homage to mammoths. But it is new in the smaller sense that it has its own particularity; its own syntax, examples, metaphors (those “reflecting mirrors”), its own audience and means of production. Or, to sum that all up, it has its own aesthetics, be they sublime or facile.

Mullarkey is insistent on the “aesthetical properties” of film. He notes that philosophers who discuss film often focus on narrative and theme and ignore mise-en-scene, editing, sound, music, etc., to say nothing of extra-aesthetic issues such as distribution, consumption and audience. Yet he’s so intent on listening to what this wonderful heterogeneity of film has to say to philosophy that he misses the most obvious point, which is that philosophy is aesthetic and heterogeneous as well. Just as film is not just it’s narrative and theme, so philosophy is not just its thought and theme.

But what Mullarkey misses is that Zizek’s particularity, the aesthetics of his quote, hinges on The Birds just as The Birds hinges on avian attack. Zizek’s philosophy is not just its ideas, but its examples and metaphors as well. And if Zizek takes those metaphors and ideas from film, then he is not (or not only) imposing transcendental Lacanianism on film, but is also imposing film on transcendental Lacanianism. If you illuminate a manuscript, the pictures illustrate the words, but the words also explicate the picture. Discourse on Method is not just “I think therefore I am.” It’s also the hysterical passage where Descartes tells his reader to put down the book, go observe a cow’s heart being dissected, and then come back.

At the opening of his monograph, Mullarkey declares that he really wanted to be, not a philosopher, but a filmmaker. He adds that both philosophy and film “share a relation with something far grander: reality itself.” That may be, but it rather misses the more obvious linkage. Both philosophy and film are artistic endeavors. Philosophy is (with some poetic exceptions) a prose genre. It lives on metaphor.

So when Mullarkey insists, “The non-philosophical Real of film has rebounded each and every philosophical attempt to explain it exhaustively” (205)—when he claims that film is not what philosophy finds in film, but rather the ever-changing wonderfulness which in film resists philosophy—he is employing a metaphor. Leonardo DiCaprio does not, after all, literally step out of the frame and beat Mullarkey with a scale model of the ship when Mullarkey explicates Titanic. Tippi Hedron and a murder of fowl do not fly up Zizek’s nose as he discusses The Birds. The rebounding which Mullarkey praises so enthusiastically is not a real rebounding but a metaphorical, philosophical rebounding. It occurs not in “the Real,” but in a book of philosophy.

So does that mean that Mullarkey, too, has failed to connect with the Real; that he too has imposed the imperialism of philosophy on the flickering continent of film? Or does it mean that he’s found the promised land, where “Cinema co-engenders a new notion of philosophy, a philosophy that may well be unrecognizable to all those who take pride in calling themselves ‘philosopher’” (213). Hard to say. Though, you know, film doesn’t seem to have particularly suffered from its past philosophical enslavement. And, for that matter, grandiose gobbledygook about co-engendering doesn’t seem especially unphilosophical.

Perhaps, then, the relationship between philosophy and film is less fraught than Mullarkey suggests. As often happens, the search for the new can blind you to the fact that the old is working fine, thank you. Film isn’t going to transform philosophy thanks to Mullarkey. It already did thanks to all the philosophers he claims don’t get film the way he does. The truth is that film and philosophy have decades of history behind them at this point. If they alter each other, it won’t be through some revelatory transformative rupture of the Real. Rather, it’ll be the way old friends change each other; a little bit here and there, through love and conversation.