The Reality of Shark Attacks

In recent years, attacks on surfers have increased. 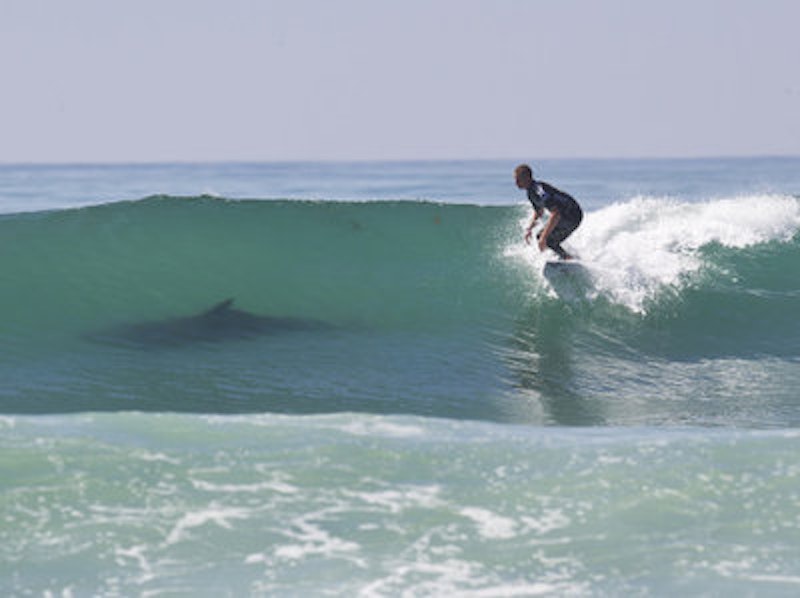 Along the California coast, surfers have a nickname for the Great White Shark. They call it “The Landlord.” Getting attacked by a shark is every surfer’s worst nightmare. “People always ask me, aren’t you afraid of sharks?” Steve Adelman, a surfer from Ojai, California says. “I tell them, no. But when I think about it… let’s just say I try not to think about it.”

In 2014, Kaleo Roberson was surfing with his three sons at Maalea Beach in Hawaii. “Everything was normal then off to the left I saw this weird ripple like a weird current. Then all of a sudden I see this mouth the size of a trash can coming at me.” Roberson swung his board at a large tiger shark and luckily landed a few strong blows. The shark swam away and Roberson made it safely to shore.

Pro surfers largely adopted a laissez faire attitude toward sharks until the Mick Fanning incident in July 2015. Fanning, a world champion Australian Surfer, was competing at the J-Bay Open in Jeffreys Bay, South Africa. As the event was being televised live, a Great White Shark attacked Fanning. Fanning instinctively punched the shark on the snout then wedged his board between himself and the shark. The shark bit off Fanning’s leash and swam away. Fanning made it to shore, shaken but unhurt.

Surfers around the world took notice. Pro surfing competitions began utilizing drones with cameras and sonar devices to detect sharks. They employed motorboats and jet skis in the belief that sharks avoided loud and busy areas. The surf community was shaken. Things would soon get worse.

In Byron Bay, Australia, two surfers were killed in 2015. One was a 13-year-old boy. A board riders club met with police and politicians demanding action. Surf pro Stu Kennedy said, “It’s fair to say everyone’s shitting themselves at the moment.” The overwhelming majority of Byron Bay surfers wanted authorities to hunt and kill large sharks in local waters.

This exact thing happened on Reunion Island, a French governed island in the Indian Ocean. In 2015 after six shark attacks, two fatal, authorities banned surfing and swimming on the popular tourist beaches. They authorized a mass shark slaughter in the surrounding waters. National Geographic cited the fact that for every human being killed by a shark, humans kill two million sharks. Experts say you are more likely to get struck by lightning than die from a shark attack. But according to the Florida Museum of National History, since 1959 in California, Hawaii and Florida, there have been more shark attacks on humans then lightning fatalities.

Comedian Robert Schimmel had a great routine about shark attacks. He said, “What you do is let the shark get up to you then you punch him in the face. When that doesn’t work, you poke him in the eye with your stump.”

For years, shark researchers discussed definitive actions to avoid aggressive sharks. They suggested punching sharks in the snout or poking at a shark’s gills. But with the thrashing involved in a shark attack, this could easily lead to a surfer thrusting an arm directly into a shark’s jaws. The common wisdom today is to use the surfboard as a protective shield. If a surfer has no choice but to confront a shark, experts now say they should poke at the shark’s eyes, not his gills or snout.

Ralph Collier of the Shark Research Committee says that if a surfer spots a shark, the most important factor is how you exit the water. “You should minimize your disturbance of the water by using smooth and rhythmic strokes to propel your board toward shore. Avoid erratic and agitated movements. If you see a floating kelp colony, move toward it.  Adult white sharks tend to avoid kelp forests.”

Though the ISAF has rated the odds of getting killed by a shark at one in 3.8 million, they did compile a list of tips to avoid sharks. Don’t surf at dusk or dawn when sharks commonly feed. Don’t ignore posted warning signs indicating shark sightings. Surf in groups since sharks tend to attack individuals. Don’t wear reflective jewelry that resembles fish scales. Don’t surf if you’re bleeding and don’t pee in the water. Both blood and urine attract sharks. Don’t surf where people are fishing. Avoid river mouths and channels, areas of high fish population and low visibility. And the final recommended action to avoid a shark attack: stay out of the water.