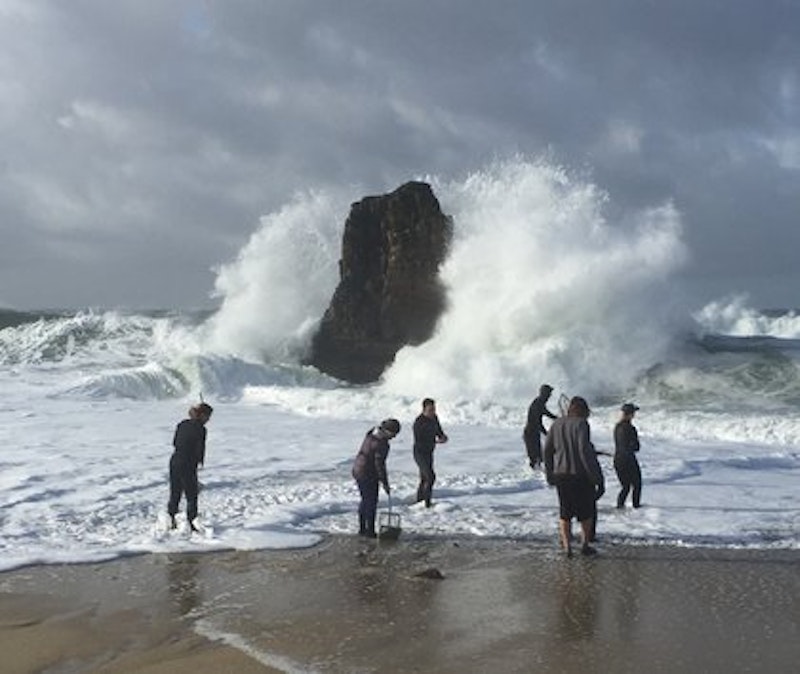 “These epic waves are gnarly."

“That boulder is sick.”

The language of Davenport beach is as unique as its locals and one-of-a-kind historic artisan sea glass. Up the hill from the beach is the Lundberg Art Studio, where handmade glass has been manufactured since 1970. Due to heavy flooding in a storm that overflowed the San Vicente Creek, large bins of the “end of day” glass stored behind the studio spilled downhill, washing through the creek and ending up in the ocean. These pieces of glass are what tumbled in the waves, becoming the much sought-after sea glass (sometimes referred to by locals as “nuggets,” or the largest, softball-sized ones, as “boulders”) now considered the most rare and beautiful in the United States because of their colors and patterns.

But there’s a problem for beachcombers hoping to find some of the colorful sea treasures. Sea glass hunting at Davenport beach isn’t strolling along a shoreline picking up pretty colored glass. This is extreme sea glass hunting, usually performed in full wetsuits by surfers or divers who know the surf. The spot where the choice “nuggets” wash up for about a half-second before the next wave comes is known as “the pit,” and there’s never really dry sand there at all—just the ocean, its crashing waves often as high as 20 feet or more, pounding against a cliff. 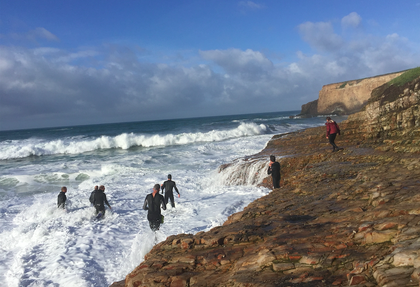 The bravest of the hunters line up at high tide in an almost hierarchical formation, in alternating order of fearlessness. The deeper in the pit, the less warning you have when the waves come. Extreme glassers in the pit have two choices when the huge waves arrive: curl up in a ball in the sand, “duck-dive” the wave and let it roll over you, or brace against it. It’s risky: if the wave wins control, you may get to sit and go for a ride, or get thrown into spin cycle in the biggest washing machine of them all, with huge rocks in the mix. The very rocks that work to tumble the glass you seek are now pummeling your shins, ankles, and other extremities. Severe bruising and broken limbs are commonplace. Some hunters in plain clothes wearing sneakers perch on narrow ridges along the cliff, jumping down between waves to try to snatch the valuable sea treasures for selling to tourists on weekends; they scramble quickly back up before the next wave pounds the cliff.

Normally a Chesapeake Bay kayaker on Maryland's Eastern Shore for my beachcombing outings, I visited the very different beach for a short trip last week. I’d been to Fort Bragg (also known as Glass Beach) which is further north in California last year, but when I heard some friends were going to be visiting Davenport the same week I was scheduled to turn in my novel, I jumped on a plane the day after I typed the words “The End.”

I stayed at the Davenport Roadhouse Restaurant and Inn, which is right across the street from the beach, has a view of the ocean, and even a shortcut path down to the sea-glass-worshipping mecca. The rooms are well-appointed and very reasonably priced, and the food (the only thing I ate each day after two 10-hour beach days was their fantastic burger) was perfect. Breakfast starts later than beach days, unfortunately, but a few buildings up there’s a little bakery for coffee and fueling up. 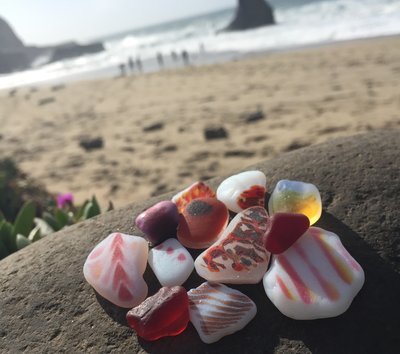 I felt fortunate to spend two weekdays on the beach: a Thursday and a Friday. Having seen many photos and videos of what weekends look like there, I especially enjoyed having the whole place practically to myself on Thursday, with just a few friendly locals showing me around. I was far too nervous to go near the big waves, preferring to stay on the outer edges of the pit and find what the waves may have generously washed in as some of the hunters used shovels to dig for treasure when the tide went down. At lower tide, I was happy to use my sand scoop to pan for nuggets. I did dash in and out of a few waves to grab scoopfuls of gravel, and got tossed by one wave, but, still healing from a broken tailbone, I was overly cautious both climbing up and down the cliff and with being overly adventurous in the tide. I much preferred to “kindergarten” the whole thing at low tide, staying at the very water’s edge or leaning against the cliff, happily digging away and finding smaller treasures as well as some really nice keepsake pieces. I wasn’t trying to win any contests for quantity or bravery.

Observing the interactions between sea glassers was interesting. Someone said they wished there were bubbles over heads with Instagram names (on the Friday I was there, a number of Instagrammers who follow one another’s finds on the #seaglass hashtag were there). There's a mix on the beach of “sea glass personalities.” While some (most!) are very welcoming, giving and generous with information and finds, others are territorial and selfish when it comes to sea glass: right down to grabbing after the same piece of glass in a wave. I'll reserve my opinions on sea glasser personalities for a separate article (novel?), because it would definitely make for an interesting read. Basically, there are all the elements of a great reality show: greed, money, power, danger, and high drama. I know I'd tune in.

There’s also an odd faux-secrecy around the beach location, so some don’t say online that it’s from Davenport, even though anyone who knows sea glass knows the origin of the glass because of its distinct patterns. It’s been written about extensively in many articles and books, is hardly a hidden beach, and there are local hunters who post and sell their finds on a daily basis. Some sea glass hunters apparently don’t want people (including me with this article, no doubt) talking about the beach because then more people will come there and take the glass, or something? Hate to say it, but the beach is already crawling with people on weekends. I'm not divulging any national sea glass secrets.

Here’s the honest truth, though: Davenport beach is far too dangerous for the majority of the population to even attempt to navigate, especially at high tide. I went there after reading many posts from the locals, talking to a lot of people who had been there, and even having a local diver leave a wetsuit for me in the back of his truck in the parking lot (not that I had any idea how to put it on—I wore cold weather kayaking gear from back home). I knew which area of the beach to avoid. Only a few days before I arrived, a sea glass hunter went missing, and tragically, his corpse washed up the day after I left. I thought about him and his family a lot when I was on the beach. Many people would rightfully argue that finding some sea glass is not worth risking your life. People die on this beach; that’s how dangerous it is. It’s not a fun weekend trip to be taken lightly.

I’m glad I got to see the beach, see my California sea glass friends, and make some new ones.  My favorite part of the trip was meeting the beach’s “good samaritan,” a fisherman and former surfer/abalone diver who brings free beer and sushi to the beach each day. On first sight, I probably (accurately) looked to him like a person who didn’t know what she was doing, and his invitation “let’s go slay some nuggets!” (that made no sense to me at the time) ended up being the reason I found the sea glass I did: because he knew how to look for it.

—Read more of Mary's beachcoming stories, or see more of her beach finds.