“Cat Person” stands tall among the mess of Kristen Roupenian’s You Know You Want This. 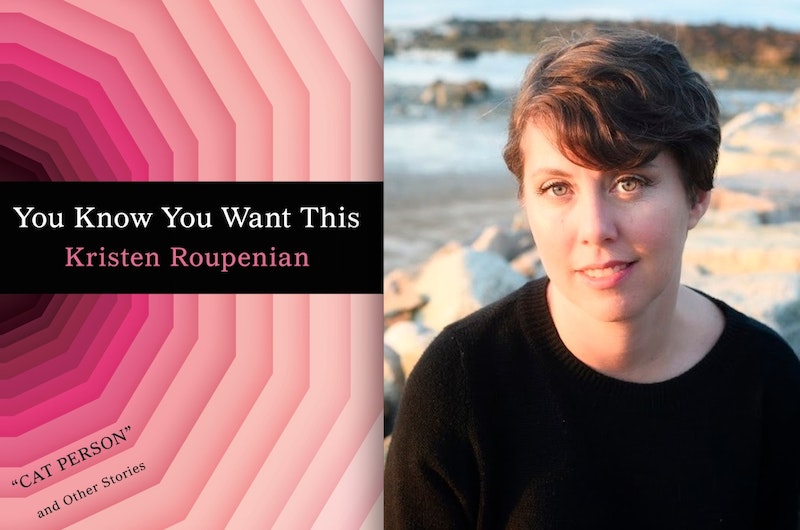 Kristen Roupenian deserved a seven-figure book deal for being the first person to write a short story that went viral. She did the impossible and brought The New Yorker into the 21st century: within hours of its publication, “Cat Person” was trending on Twitter and thousands of people had read it and argued about it everywhere. It’s a remarkable piece, understated and restrained but deftly detailed and familiar, and in my mind only Lena Dunham’s Girls nails millennial dating in the 2010s better than “Cat Person.”

That story had something of a “shock” ending, and the last line was what much of the debate and criticism was about back in December 2017. Though it’s shocking, Rob calling Margot a “whore” for ignoring him at a bar after a bad date is pretty run-of-the mill and banal as far as abuse and romantic trauma are concerned. And that’s the punch of the story, how taut it is while being realistic and plausible, the prose practically documentarian. It isn’t what he said but how the story builds to its sudden but inevitable and completely predictable conclusion. It struck a nerve because so many people have been there, or close to it. It’s unavoidable.

Writing for The Cut, Lydia Kiesling expressed similar praise for the piece: "What I thought was brilliant about the story is not that it reveals that men are secretly bad and dangerous all along, but the way it shows how harm is built into and amplified by modern sexual codes in a culture that is, paradoxically, incredibly libertine while also being close-mouthed about pleasure, attraction, desire, and consent."

Roupenian’s debut short story collection, You Know You Want This, came out last week, just over a year since “Cat Person” was published. It shows: this book is a total mess, a rush job full of first drafts, sketches, and stories that needed more time to bake. There’s a surprising lack of finesse and subtlety in every story other than “Cat Person,” which is of course included, right in the middle book—it towers over every other story. Roupenian’s a very pulpy writer, and the body horror and supernatural flights of fancy remind me most of Stephen King or Chuck Palahniuk, but her prose is so clunky and riddled with clichés:

“That terrified face he made soothed us a little, but it was a drop of water on a conflagration.”

“Through sobs, she marshaled her evidence of his affection.”

“There must be a German word for this feeling.”

“[T]his free-falling sensation she feels every time she looks at Taylor, like her hands are closing again and again on emptiness—but she thinks she knows better than to call it love.”

A couple of the stories are fine, but with more time, work, and editing could’ve been great. “Bad Boy” and “Death Wish” are concise sex nightmares, but they verge into magical realism, a wedge between “Cat Person” and the rest of the collection, which is pretty much straight horror. “Sardines” ends in a mass of wine mom flesh-thrashing and suffering like the end of Akira or some sick Katamari Damacy spinoff. “The Night Runner” is evocative and elusive in a way that nothing else in here is—no surprise that it was previously published. The story published a week ahead of the book’s release, “The Good Guy,” is the worst piece among the 12.

Roupenian has jokingly suggested that it could be taken as a response to all the insane people that wanted to read “Cat Person” from the guy’s point of view, but it’s a disaster. “The Good Guy” is such an over-the-top and blunt effort to explore a certain type of male psychology that it does make a good companion to “Cat Person,” because she nails that type in the latter and completely fails in the former. You Know You Want This ends with “Biter,” another example of magical realism that ends with the most groan-worthy #MeToo stinger imaginable. Its construction is as wobbly and obvious as almost everything else in the collection, and should’ve been dumped on Medium or Jezebel. Roupenian is working on a novel: maybe she’ll take more time. Even the cover looks like it was thrown together in five minutes. I don’t care if characters get their tongues bitten off or a teenager starts levitating, the least I expect is passable prose.