A week on Staten Island. 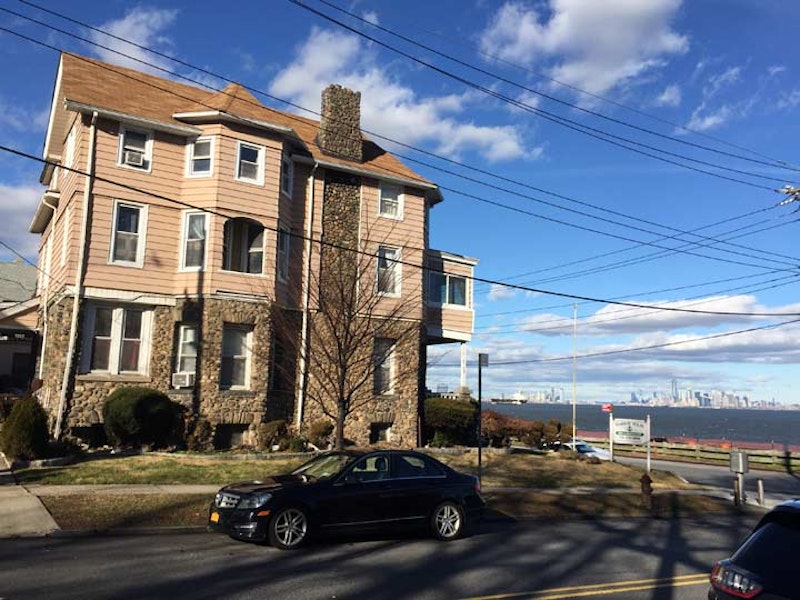 In February 2005, when I was writing my first book, Forgotten New York, I lived on Staten Island for a week, as it was easier to get around taking photographs for the book if I didn’t have to commute by railroad, subway and ferry every day from Flushing. I took a room at the Harbor House bed and breakfast, which is perched at the edge of the Narrows at Edgewater St. and the beginning of Hylan Blvd. in an area called Rosebank.

It was a pleasant week. I wandered around the Island every day, using buses to get where I needed to be (I don’t own a car or drive), took the ferry to Manhattan for dates, and received friends at the Harbor House. The week was changeable, from quite mild the day I arrived, to cold and windy, to a snowstorm the day before I left. I’m hoping to return some day—especially if I have the opportunity to write another book. However, I have trouble sleeping outside my own bed, and a local rooster ended my hopes each day around daybreak by continually crowing.

Rosebank’s in southeast Staten Island with tree-lined streets filled and old homes that are gradually giving way to new construction, especially along the old right-of-way of the South Shore Branch of the old Staten Island Rapid Transit. Beautiful views of the Narrows, the Verrazano-Narrows Bridge, and Bay Ridge, Brooklyn, can be glimpsed from Alice Austen and Arthur Von Briesen Parks. Rosebank, primarily an Italian neighborhood in the early 21st Century, has over the years been home to pioneering photographer Austen and Italian unifier Giuseppe Garibaldi. 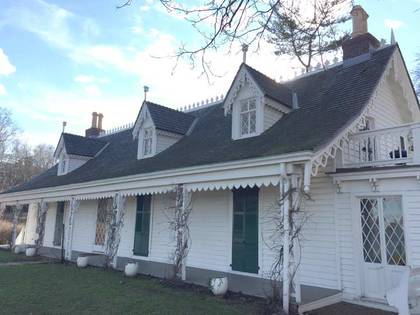 At #2 Hylan, you’ll find a large park with a one-story home in its center: “Clear Comfort,” for many years the home of one of Staten Island’s most accomplished photographers, Alice Austen. An original section of this house was built in 1691, and since Hylan Blvd. ends in Tottenville at the Conference or Billopp House, it means the boulevard begins and ends alongside 17th-century houses. Can any other major thoroughfare in the USA make that kind of claim? Her residence is now a museum dedicated to her work, and its lawn, like adjoining Fort Wadsworth and Von Briesen Park, affords spectacular view of the Narrows, the Verrazano Bridge, and the Manhattan skyline. 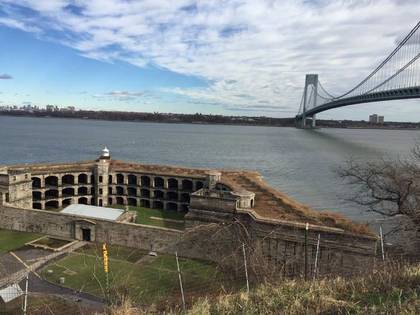 The southeastern tip of Staten Island, its closest approach to Long Island, has been protected by fortifications since 1663, when a Dutch blockhouse was established. The area was known as Signal Hill during the colonial period and the Revolutionary War: this was a crucial site from which to spy approaching British vessels.

Battery Weed (Fort Richmond, renamed in 1863 for General Stephen Weed after his death at 29 at Gettysburg), pictured here, was designed by the US Army’s chief engineer, Gen. Joseph G. Totten, and was built between 1845 and 1861, while its neighbor, Fort Tompkins, was built between 1858 and 1876. Ft. Tompkins was renamed Fort Wadsworth for Gen. James S. Wadsworth, an 1862 NY State gubernatorial candidate who served with distinction at the battles of Bull Run, Fredericksburg and Gettysburg and was killed at the Battle of the Wilderness in 1864. Staten Island’s and Manhattan’s Wadsworth Aves. also bear his name.

Well into the 1970s, Ft. Wadsworth was considered the oldest continuously staffed military post in the USA. In September 1995 the fort became part of the National Park System; its grounds and military museum are open to the public, though part of it is still used by the Coast Guard. You can scamper around its now-abandoned heights for premium views of the Verrazano-Narrows Bridge along a designated 1.5-mile trail that winds past both Battery Weed and Fort Tompkins. On my recent trip, though, the visitors’ center was shuttered, because of the government shutdown. 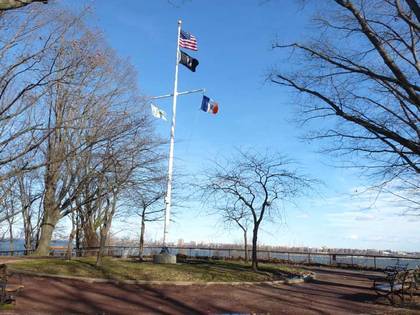 Von Briesen Park, entered along Bay St. just to the west of Fort Wadsworth, is one of New York City’s more obscure waterside parks. It was established in 1949 on the former estate of German immigrant Arthur Von Briesen (1843-1920), an attorney who was the founder of the German Legal Aid Society, which provided free legal aid to German immigrants in NYC; in 1896, it became the Legal Aid Society, expanding its services to all New Yorkers. Von Briesen obtained this property in 1901, rebuilding the former farm as a residence for his family, which donated it to NYC Parks in 1945. Robert Moses moved quickly, however, to raze the residence and other buildings on the site. 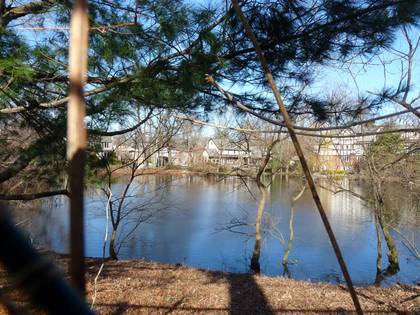 Glimpsed from a path in Von Briesen Park, as well as from behind a fence on Sea Gate Rd., Clifton Pond is on private property. It’s one of a number of numerous “kettle ponds” left over from the passage of a glacier at the end of the last Ice Age. For much of its history, it was owned by Cornelius Kolff, one of the more preeminent Staten Island historians and folklorists—a Staten Island ferryboat, since retired and scrapped, had been named for him, and also by F. F. Alexandre, steamship line owner and founder of the local semiprivate development, Shore Acres. 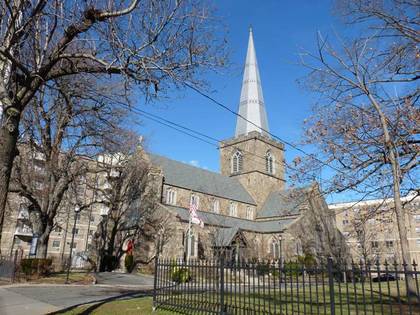 Two churches anchor Bay Street in Rosebank: St. John’s Episcopal, built at 1331 Bay St. in 1871, though the congregation was organized in 1843. The St. John’s architect was Arthur Gilman, who practiced mainly in Boston before building this church. Its historical plaque claims that ferry/railroad magnate Cornelius Vanderbilt (born nearby in Stapleton in 1794) was the first child baptized in the original frame building across the street.

Down Bay St. in Clifton, St. Mary’s Roman Catholic Church, built in 1857 at 1101 New York Ave. (since renamed Bay St.), is easily recognizable by its campanile, visible from the surrounding area. 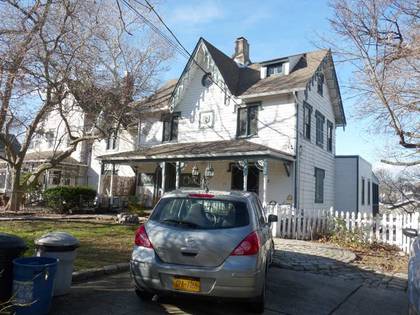 On Belair Rd. between Bay and Wingham Sts. you’ll find the remnants of suburban development that begun here in the 1830s, most notably Woodland Cottage at 33-37 Belair Rd. The Gothic Revival cottage was built in 1845 and served as the rectory of St. John’s Episcopal Church between 1858 and 1869. Of note are the second-floor casement windows with diamond-shaped panes. Unfortunately, since this isn’t a landmarked area, the Cottage’s surrounding buildings that originally resembled it have been altered heavily. 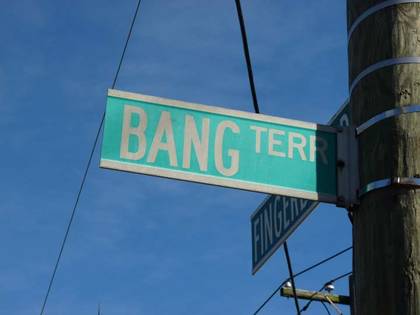 Bang Terrace is a very short lane in Rosebank, off Fingerboard Rd. near Bay St. Only its street sign gives it away as being more than a driveway. Unusually for an alley, it has a slight S-curve. As for its unusual name, it’s probably from a former local property owner.

Fingerboard Rd.’s unusual name, according to local legend, comes from a large wooden cutout of a finger on a sign pointing to Richmond’s county seat, which was formerly in Richmondtown (Fingerboard Rd. connects with Richmond Rd., the road to Richmondtown). Of course the sign disappeared many years ago but the name remains.