No One Puts Buzz in a Box

These characters are alive in the movies when adults aren’t watching. 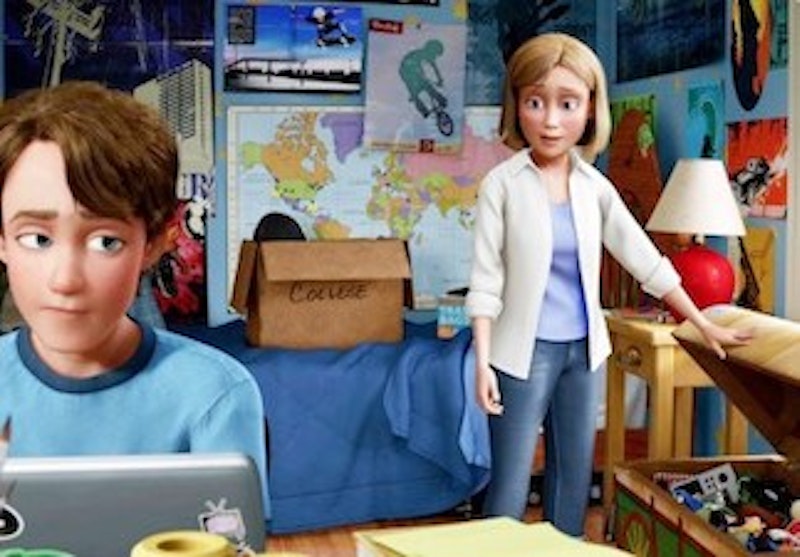 The day the Disney movie Toy Story came to life in my house was the death of childhood and as a mother of four, I wasn’t ready. The inevitability of an empty nest became apparent over time, as one by one, my three daughters grew taller than me. Yet somehow my soon-to-be-13-year-old son had been shielded in my mind from this fate by delusions of maturational immunity. It was relatively easy to ignore rapid height and baseball cleat size changes, middle school girls “Snapchatting” him and any other evidence he wasn’t still three and watching Cars on DVD from his ride-on Tow Mater.

I watched with joy as my little girls grew into young women—the saying “In motherhood the days are long but the years are short” proved true. They went from playing with Polly Pockets to picking out prom gowns and although I wished for a slow-motion button to enjoy those early years more, to have some of that time back in pumpkin patches and Girl Scout troops and camping trips, I see them as young women—three scientists and environmentalists—I’m proud and don’t feel sad about the loss of their childhoods. Maybe it’s because their little brother is the only boy or the last kid in the nest that everything is filled with such emotion and finality.

Last summer his sister Molly was home from college and on a day off from veterinary tech work, volunteered to charge her brother $20 to clean his perpetually messy room. He agreed to $15. I returned from teaching a writing class to find three large cardboard boxes in the hallway outside his room. One was full of clothes. One was full of the Nerf guns that had taken up most of his closet and made more sense to exist in the garage, since the bullet sounds of Fortnite had replaced Nerf bullets on the floor awhile back.

It was the third box in the hall that made me lose my mind. I glanced down and saw something no mother who has raised children in the 1990s, no parent who has watched a bunch of Disney movies (on VHS!) with their kids and taken them to Disneyworld should ever have to see.

There, in a box filled with Hess trucks, Legos, remote control planes and other toys, was one of the quintessential animated duos of all time: an upside-down Buzz Lightyear and Woody, his cowboy hat having fallen off, resting sideways and deeper in the box beside some Legos.

I gasped, my hands flew to my face. I started screaming. “Oh my God!” Tears ran down my face. Why would anyone ever put Buzz Lightyear and Woody in a box? Anyone who’s ever seen Toy Story knows the symbolism associated with discarding Buzz and Woody. These characters are alive in the movies when adults aren’t watching, so to come upon them in the box-tossed state made me feel like the mother character in the movie, as though they’d been alive and talking moments before and had suddenly flopped into the current lifeless pose.

This wasn’t just any Buzz Lightyear, either. This was my 1994-born daughter’s Buzz that Santa Claus, after being asked for only one thing, had to search endlessly for, calling area Toys R Us factory warehouses because it was sold out everywhere. And the Woody? Was a surprisingly excellent McDonald’s Happy Meal cloth toy with detailed hat that had also been hers. The pair of toys had made it nearly a quarter century, through all four of my kids, to a final resting place in my youngest kid’s closet.

So I stood in the hallway, holding Buzz, adjusting Woody’s hat, and crying my eyes out. My oldest daughter, from her apartment an hour away, fortunately wasn’t present, as my two younger kids scrambled to find Molly, and relay the information that Mom had gone Mommy Dearest wire-hanger level insane about the Boxing of Buzz and Woody.

I went into Bobby’s room and arranged Buzz and Woody back on a shelf. He said he was sorry (even though it wasn’t his fault) and that he would leave them in his room. He hugged me with the sort of awkward side-hug that’s our new hugging reality now that he’s a teen. What happened to my little boy, and the days of him riding on his little Tow Mater car all over the house?

I went to my room, closed the door, and flopped on the bed, trying to get myself together, cursing Disney for this emotional breakdown. Back in the days of their releases, I’d shed tears watching all three Toy Story movies, of course I’d cry when the characters pretty much came to life in my own house. Molly apologized when I’d calmed down and she got to me, arguing she had removed all items he “didn’t play with anymore,” which I understood, but as a 1990s kid herself, I did get her to agree that Buzz and Woody were “museum quality” childhood toys that should be saved for future generations and never just tossed away.

I get that Bobby isn’t going to hop onto my bed with Buzz and Woody, singing “You’ve Got a Friend in Me” anytime soon. I’ve been keeping score of his baseball teams for nine seasons, and every year he allows only one photo of us together (“for Mother’s Day,” I say). He’s always hated getting his photo taken. He turned 13 last fall. Every day he says goodnight and good morning to me, and gives me that hug. He holds the door for me in public places, even though I never taught him to do that. I can’t stand cooking, but he loves to watch cooking shows, and this summer he made me scrambled eggs and a tuna melt. I take videos of his basketball game three-pointers for his Instagram.

Any minute he’ll be taller than me, and I don’t know what I’ll do when he leaves for college. Kids grow up, it’s just what happens. But at least Buzz and Woody are still on the shelf.