My brother taught me sometime before I was nine. 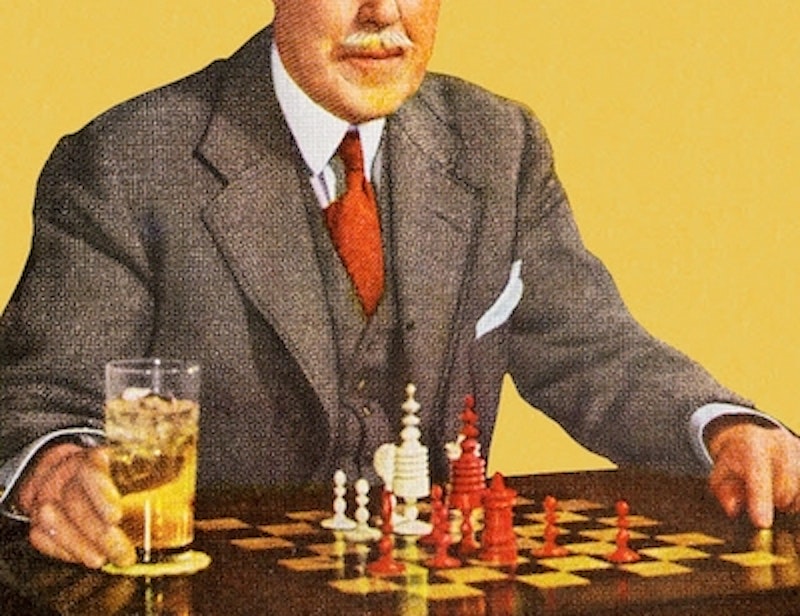 I’m reading Eric Hobsbawm’s The Age of Extremes on the New York City subway when he says something that blows my mind. He’s writing about the Dada movement and the nihilistic rejection of bourgeois society at its heart:

...Marcel Duchamp’s... exhibition of a public urinal [The Fountain] as ‘ready made art’ in New York in 1917 was entirely in the spirit of Dada... but his subsequent quiet refusal to have anything further to do with art—he preferred to play chess—was not.

Of course I know about Duchamp’s urinal; he was iconic in the film program of my small liberal arts college in Western Massachusetts. I know about the urinal, the wordplay, the drag, and the Descending Staircase which seemed to anticipate the mouse trail on a malfunctioning PC. I did not, however, know about the chess.

I’m standing in the Brooklyn venue Elsewhere watching Why? play Alopecia all the way through to celebrate the album’s 10th anniversary. I’m standing with two friends from college, and we’re all looking up at Yoni Wolf and re-feeling whatever we felt when we first heard the album. A lyric that’s proudly mouthed by everyone in the audience makes me embarrassingly self-aware: “I only played chess once in my life, and I lost.” The sentiment? Who plays chess.

My brother taught me sometime before I was nine, and I lost almost every game of the next 15 years. I started playing daily in 2016 and saw things; these were not hallucinations, but more impressions left by chess as it moved around my brain, restructuring my mind. Replacing the paper towels in the kitchen became chess. Texting became chess. Every aspect of my professional life became chess. Duchamp compares the aura of chess patterns to poetry saying, “The chess pieces are the block alphabet which shapes thoughts; and these thoughts, although making a visual design on the chessboard, express their beauty abstractly, like a poem.” Yes, shapes thoughts. This is what chess is doing to me.

The sense that all the reasoning and planning relevant to skillful playing of chess could be projected onto every facet of my cognitive activity was perhaps most succinctly summed up by a friend and fellow chess player who, stoned and red-eyed, asked, “Yo, Jeremy, how deep is chess?”

Chess is very deep. Its depth lends itself to flirtations with insanity—there’s a reason that, after mirrors, chess is the central theme of Lewis Carroll’s Through the Looking Glass. There’s an imposed order; there’s also, for the loser, the sense that things are spiraling out of control. It can be unrelenting and only becomes rewarding when watching your mind become aware of its own impulses. “Chess players are madmen of a certain quality,” says Duchamp, “the way the artist is supposed to be, and isn’t, in general.”

I want to scold Duchamp for coming up with a quote so scathing and dripping with ego.

I still can’t believe Duchamp “quit art” to play chess—are these the appropriate words? They’re so dramatic, definitive, and dumb. Duchamp makes it seem as though the one inevitably follows the other. And in his case there’s overlap: in 1968 he collaborated with John Cage for a performance in which 64 electronic audio triggers were dressed up like a chessboard and the two played a game, creating an improvised piece of music. His unsolvable endgame puzzle published in 1943 is more an example of concept art than it is a worthwhile chess exercise.

Maybe I could’ve made some of these connections in 2011 when I was shown René Clair’s Entr’Acte from 1924. I’d just fallen in love with someone who incidentally had introduced me to Erik Satie (as well as Jorge Luis Borges)—and here in Entr’Acte was Satie, months before he died, hopping up and down like a rabbit and firing a cannon at the audience. What a lovely coincidence.

Who else should appear in this early example of cinematic avant-garde? Marcel Duchamp. Who is he with? Man Ray. What are they doing? They’re playing chess.

Reading Hobsbawm, I was reminded of a similar passing reference to chess in a Borges short story, one of his histories of infamy:

Alvarez de Pineda discovered this great river [the Mississippi], though it was first explored by Hernando de Soto, conqueror of Peru, who whiled away his months in the prison of the Inca Atahualpa teaching his jailer chess.

It struck me that both passing references are to historical figures who find themselves somehow outside the river of history: Duchamp abandoned his legacy; de Soto is wasting his time in a prison cell. Both are betraying something about themselves. Both are pulled toward the gravity of the game.

What’s the gravity of the game? Likely something to do with madness, which can maybe be defined as being the intersection of isolation and ambition. Learning that Duchamp was a chess player fulltime distracted me from getting the gist of what Hobsbawm was saying in that sentence, that The Fountain was born of nihilism and irony, but that Duchamp’s playing chess was unabashedly sincere. “Not all artists are chess players, but all chess players are artists,” Duchamp says. If he’s correct, it’s because of four things: every chess player is in constant conversation with another chess player; every chess player is also alone; every chess player is unsparingly and unavoidably themself; and every chess player is, however briefly, devoting themself to the craft of chess. These are the hypnotizing realities for a game that resembles a mirror but isn’t one.

A year and a half ago, Oliver Roeder wrote the piece “American Chess is Great Again,” and this past March he wrote about the American player Fabiano Caruana, saying, “For the first time since Bobby Fischer captivated the country, a U.S. grandmaster has a shot at becoming the undisputed world chess champion.” Caruana faced off against the great Norwegian, Magnus Carlsen, at the World Chess Championship in 2018; I watched coverage on CNBC in the bagel shop I worked in. FiveThirtyEight published pieces for each of the 12 games of the final. The players’ names were familiar to my friends. Something was happening with the popularity of chess. I spent the holiday on Lichess—an open-source chess server, second-most popular after Chess.com—with my partner’s 17-year-old brother; he plays with his friends, just like I play with friends from college. He knows about Carlsen, who he calls a “troll.”

The first chess player that entered my brain was Stanley Kubrick, one of those artists who communicates genius through brute force and singular aesthetic. Has another director been so widely regarded as cold and calculating? When I was a teenager falling in love with his movies, I understood that part of his genius was his chess-playing. I sought out photographs of him sitting at a board. But Kubrick’s chess-playing was evidence of his cinematic skill, not the other way around. Kubrick didn’t stop making movies to play chess; he played chess in order to make movies.

When I read what Duchamp says about chess and madmen, I don’t think about Stanley Kubrick. I think about Magnus Carlsen.

Carlsen is 28. He has four World Chess Championship titles, winning every World Championship since 2012 when he was 22. In this current championship, he will likely intentionally draw each of the first 12 rounds to tie-break in speed chess, an area in which he’s undisputedly the world’s best. He is without a doubt one of the best players to have ever played the chess. But none of this makes him mad to me.

He’s mad because he has the name of a James Bond villain. He has a gorgeous, Scandinavian pout, a statuesque sweep of blond boy-band hair. His website—full of photos of Carlsen pouting, smiling, brooding—advertises three Magnus-centric chess apps: Magnus Trainer, Play Magnus?, and Magnus’ Kingdom of Chess, a puzzle-adventure game that teaches kids how to play. He’s modelled for G-Star Raw alongside Liv Tyler. He plays on Lichess under the username DrDrunkenstein.

In other words, it is unclear if Carlsen’s madness has anything at all to do with his chess-playing. No, he is simply mad in the way the 21st Century has been mad. Bobby Fischer, the 20th.

When the winner of the most recent World Chess Championship is finally announced, after 12 draws and three rounds of speed chess tiebreakers, the champion is not Fabiano Caruana. It’s Magnus Carlsen.

In the weeks since reading that sentence about Duchamp and chess, the beautiful flavor of it has soured. The romanticism of abandoning all things—this was what my first college girlfriend and I shared when we read Thoreau, when we listened to Bon Iver's first album recorded in that cabin in Wisconsin. Chess swallowed Duchamp whole. The game has a mystical seduction that only the mad understand, or so I unconsciously imagine.

But I don’t have the same romantic notions I had when I was 18; I now associate some of these notions with my own mental health. Why is it beautiful (or necessary) to have one’s life take a severe and sudden turn? Why must I approach my present and my future aggressively, decisively? I’m playing against someone on Lichess who on his second move sends his queen out into the middle of the board, an unorthodox and dubious opening; apparently Woody Harrelson played this opening against World Champion Garry Kasparov in 1999. I can hazard a guess as to why the person on the other side of this game made such an unwise and aggressive move. It likely has to do with how he feels in this moment and how he would like to play chess.