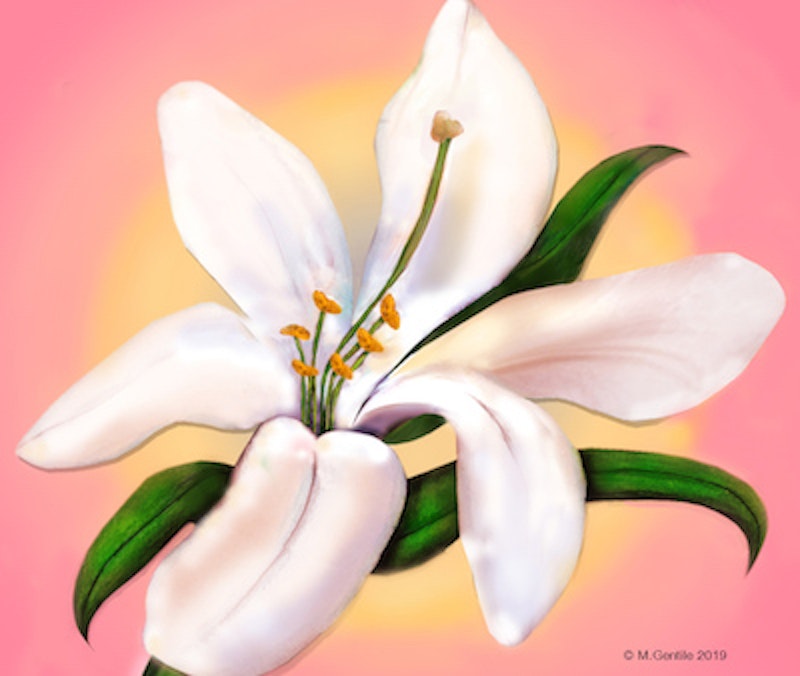 “When you think about elusive beauty, nothing compares to an Easter lily,” sounds like a trite statement. But it’s true. To portray such a serene creation as innocent would be naive. The subject comes up because California’s facing another environmental crisis. This time, there’s a flower with a target on its back—the Easter lily.

We start in Del Norte County, California, population: 767. Exhilaration flows when you locate a secluded place for daydream believers. The scenery is pure National Geographic cover material: fragrant air, protected by a bay, soaring redwood forests, hugged by the Pacific Ocean. Smith River is “California Dreamin’.” Of course, that’s only when everyone’s not busy working.

There’s an 800-acre valley next to the Oregon border that’s home to five horticultural farms owned by four families. Every year, the farms provide the world with something remarkable. They produce 95 percent of the world’s 14 million Easter lily bulbs. Smith River is known as the “Easter Lily Capital of the World.”

In 1919, Louis Houghton, a veteran and agriculturalist, collected a suitcase full of hybrid bulbs from Japan. When he returned home to southern Oregon, Houghton shared the flowers among friends and fellow gardeners. The lilies thrived in the region’s fertile, micro-climate.

“Consider the lilies, how they grow” (Luke 12:27). Saint Luke knew a thing or two about the lily’s problem: they’re slow growers. Imagine the drawbacks if you had to spend your life buried in moist, rich soil for three to four years. There’s non-stop, labor-intensive cultivation. Hungry rodents, nematodes, and root rot make for trouble too.

Under these conditions, a lifestyle of stress defines the lily. Bulbs are dug up, divided, pruned, and replanted several times. The boxed harvest is shipped to greenhouses for controlled environment force blooming. Forty days of refrigeration is required to create a “fake” winter.

Flowers are always in high demand during holidays, so shipment and scheduling are crucial. There’s just a narrow, two-week sales window before Easter arrives. Despite the difficulties, the market for Easter lilies remains steady each year.

The spirit of Easter revolves around celebrating the Earth’s rejuvenation at spring. It’s also when children expect a basket full of candy from the Easter bunny. Remember kids, putting a chocolate bunny on a radiator to keep it warm—not a good idea.

The white lily fits into part of this tradition. Easter is a movable holiday with a complicated date setting process based on the Paschal full moon. The calendar dates can vary. Easter can fall on a different Sunday each year, anytime from March 22 to April 25. This year Easter falls on April 21.

Let’s take a moment to contemplate all the myth surrounding the lily’s everlasting role in history. There’s a lot to “consider.” Images of lilies first appeared in ancient Crete as a fertility symbol. In Greek and Roman mythology, wily Zeus tricked queen of the gods Hera to suckle young Hercules. The baby super-god was a hard-biter. Hera’s spilled milk sprayed across the sky and became the Milky Way, while Earthbound droplets became lilies. Neat, always wondered how that happened.

Venus, goddess of love emerged from sea foam. Her eyes fixed upon lily’s beauty and turned green. Venus cursed the flower, causing a large pistil to grow in the flower’s center.

Lilies are core to Christianity and the Bible, symbolizing hope, love and the resurrection of Christ. When expelled from The Garden Eden, lilies sprung from Eve’s tears. Lilies were found in the Garden of Gethsemane the night before Christ’s agony. Lilies grew from the Lord’s blood, sweat and tears during his crucifixion.

Known as the Madonna Lily, several religious paintings show the Archangel Gabriel handing the Virgin Mary white lilies, symbolizing her virtue and purity. And, lilies convey a return to innocence after death, explaining the flower’s popularity around a casket.

During the Victorian past, clergy removed a lily’s reproductive parts before altar placement. Religious types deemed the measure appropriate to prevent any sensual experiences from happening at gatherings. The tale and life of Lilium longiflorum may suggest perfection, but that’s not true. In January 2018, California State reported high pollution levels in the Smith River. Lilies require large amounts of pesticides. According to The Pacific Coast Federation of Fishermen’s Associations, “Growers use nearly 300,000 pounds of fumigants, herbicides, and fungicides yearly in the estuary.”

California findings also show there’s a significant threat for migrating salmon. Some farm experts say it’s impossible to grow a bulb in the ground for years without bugs or fungus.

Pesticide use is a touchy subject. Part of the lily’s prosperity has to do with the inert nature of its cultivation. And here’s where the irresistible flower presents a challenge. On one hand, California officials, alongside environmental activists, have pollution concerns. On the other, lily growers are making compliance efforts to restructure within the laws. The floriculture industry stands in question, which is understandable because the livelihoods of farmers are at stake in this thin-margin business.

As the sun grows hot in Smith River—the lilies continue to bloom. After all, everyone wants white lilies for Easter. Gardens overflow with blossoms on Easter Sunday. A mysterious, delicate fragrance drifts throughout the church. Upon further investigation, an altar boy discovers the scent’s source.

A statue of the Virgin Mary is surrounded by dozens of fragrant Easter lilies in full bloom. The curious youth takes note of the “pretty things” recalling, “To gild a lily is to attempt, foolishly, to improve on perfection.” And most likely, the lilies came from Smith River.