No News Is Good News

People hear what words they want. 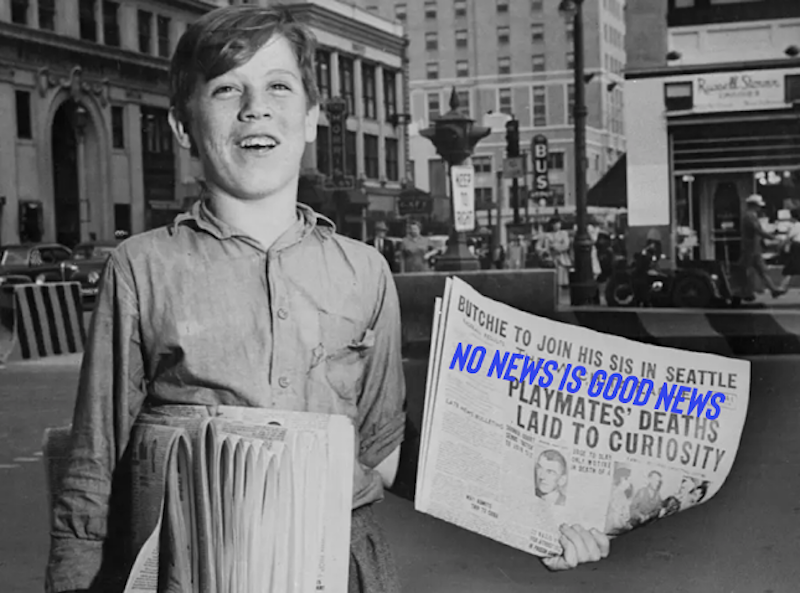 Paperboys on every town and city street corner shouted out the headlines. But, on a slow news day, they were made up. Murder, war, and scandal, call it embellishment or poetic license. The sensational, lurid, even shocking stories of the moment. It doesn't matter if the reports are false. Another example of the whole truth and nothing but rearranged to suit the reader or listener. Brainwashed citizens eat it up. The brain police are vigilant.

On the 1960s TV cop show Dragnet, the character Sgt. Joe Friday said, "Just the facts, ma'am." The fact is he never actually said it. At least not that way. What he stated was, "All we know are the facts, ma'am." The misquoted line is typical of how words frequently get twisted more often than realized. People hear what words they want.

Like the born-again Jesus freak who asks a stranger, "Have you heard the good news?" The clueless stranger replies no, and the cornball Christian answers, "Jesus loves you so much he died on the cross for your sins." Sorry to hear that, but it isn't news. It's a statement based on tales handed down from ancient times. People believe what they want. The perceived facts get jumbled, and too many people accept nonsense as gospel truth. The Bible is the oldest newspaper ever printed.

My brother had a newspaper route back when we were kids. Sometimes I’d tag along with him and his paperboy buddies before sunrise. A truck would dump stacks at a designated street corner, and the boys would grab a big bundle or two. They all had an official pouch with a strap to carry and deliver the newspapers. They were made of heavy-duty white canvas, dingy from newsprint ink plus wear and tear.

They had handfuls of red rubber bands in the bottom of the sack. The procedure was to fold the paper inside itself into a bundle and wrap a rubber band around the middle to secure it before tossing it onto a subscriber's front porch. I don't know if it was The Sun or The News-American, but they weren’t really that different. Monthly bill collection days were a drag because many customers wouldn't settle their tabs. A lot of paper carriers helped themselves to free breakfast compliments of the Cloverland Dairy. Like their commercial jingle, "Milk and butter, and eggs and cheese fresh from the farm to you," delivered right to your home. Little square metal coolers sat on most people's front porches filled with donuts, chocolate milk, and orange juice.

Now people deliver newspapers from their cars. They cruise along streets, tossing papers sealed in plastic bags from car windows that land on the front lawn, neighbors' sidewalk, or lobbed, hidden in the bushes. There goes another time-honored tradition thrown to the wayside. My old man sent me up the hill with a quarter to the paper box to buy the evening edition so he could check the racing form for the next day at Pimlico or Timonium. The newspaper was a big deal on Sundays. We went right for the funny pages after separating ads for new cars, supermarket sales, classifieds, real estate, and useless consumer crap. There was something intangible about perusing, holding, and folding the morning paper.

Nothing compares to the feel of newsprint in your hands and the rustle of paper turning pages. The smell of ink and the smudges it left on fingertips. Most folks would scan the headlines first, maybe the daily horoscopes, then check out the obituaries to see if anybody they knew had kicked.

The halcyon days of newspapers are pretty much gone, but the ads and circulars still arrive every week in the mailbox. There's nothing less satisfying than retrieving the mail only to find a pile of useless advertisements stuffed inside. Who looks at them? People who cut coupons and savvy shoppers looking for good deals, I reckon. Finding an empty mailbox is preferable. The bills will always arrive on time. The important-looking stacks of envelopes appear official but contain stupid come-ons and introductory offers for aluminum siding, offers for AARP, AAA, medical and life insurance, charities, and other superfluous information about nothing. There was something better about getting the news in print. Now the news is hard to get and even harder to believe.