Of Comics, Crayons and Quarantines. 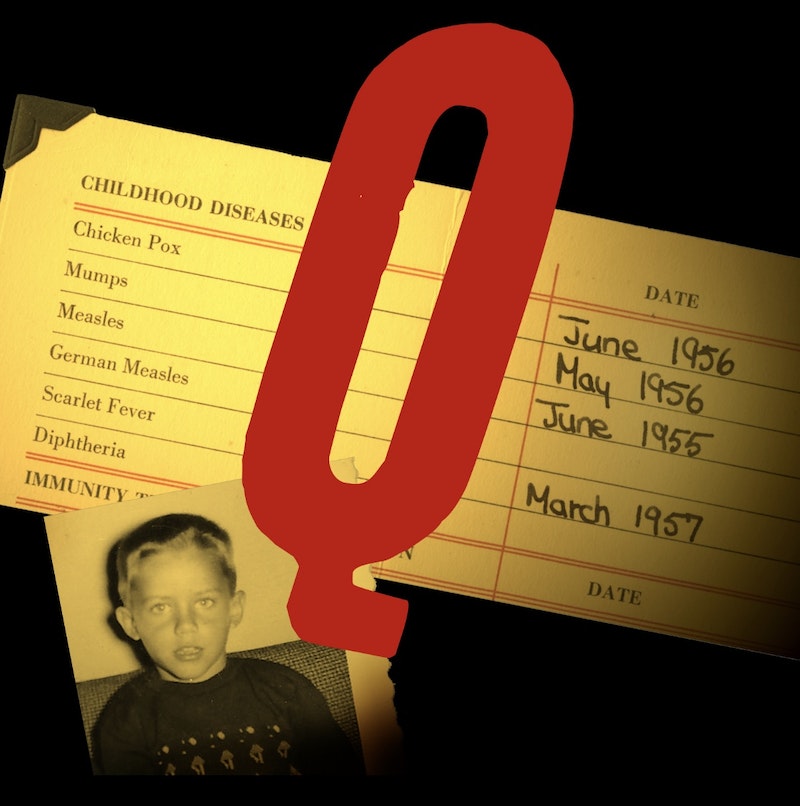 Fifties kids routinely contracted measles, mumps, chicken pox, and scarlet fever. Between 1956 and 1957, I was dealt my share of delirium, spots, royal rashes and putty-faced puffery and skated with that, thank goodness. Serious business no doubt, enough to warrant a public health officer nailing a scarlet-lettered QUARANTINE sign to our Jersey apartment door.

Unsure if that happened for all those bugs, but I’m positive at least one. Hard to say which, maybe measles, the most trippy. I was placed in solitary in my parents’ bedroom with blinds closed. I’ve since read that a darkened room was part of measles’ usual and customary homecare, to prevent blindness, at that time linked to the disease. Surprise, this stagecraft did nothing to diminish my altered state.

The sign on our apartment door nixed returnable glass-bottle milk delivery, only disposable waxed cartoons permitted. My father was allowed to go to work. Not sure, but I think my mom was confined to quarters like me. Groceries were commonly delivered at the time, even to those in modest circumstances like our own. Baked goods too, by our trusty Dugan’s bread man. So that in-place distribution network worked out for the best.

I believe a visiting nurse checked-up once or twice. Our family sawbones checked-in too, jovial Dr. Day, looking like a clean-shaven Coke Santa out of uniform, suddenly looming in his dark woolen suit, accessorized with regulation black bag that didn’t appear to conceal anything more than a stethoscope, some tongue depressors and one of those ear flashlights.

For all that unpleasantness, there were plenty of far less serious Nineteen Fifty-Sick days. At the least critical end of that spectrum was outright fraud, parentally-sanctioned, de facto truancy, to be blunt. Nobody was kidding anybody. If Doctor Spock was in the family bookcase, chances were mom was good for a Mulligan every 60 days or so.

The preponderance of mid-century modern convalescence fell somewhere in between. You legitimately felt under the weather. Less than sparkling. Indisposed. Below par enough that trappings of bedrest—pajamas and blankets—­­were mandatory as a mask these days.

Now for the nuance. If you were really sick, you stayed in bed, which meant no TV. This was particularly brutal in our Jersey apartment, where New York City channels all but ringed the dial, and Philly stations plugged the gaps.

If you were semi-sick, or in demonstrable recovery, living room TV, generally the only one in the house, could be an option. Not so fast though. Protocol typically required the patient to remain in pajamas and under a blanket. No big deal, right? Only a fool would kick up a fuss.

Finessing that sweet spot meant being sick enough to avoid school, and well enough to watch TV. Otherwise, it was strictly you in the saddest of sacks on Poor Devils’ Island. No smartphone, no gaming console, no nothing but the same old books in your bedroom bookcase and a View-Master with six discs you stared at so many times, you could see them eyes shut. View-Master? Imagine an Oculus VR headset stuck on stupid pictures of Disneyland.

Or, you could get lucky enough to score hand-delivered, newsstand-fresh comic books, a stack of the latest numbers. Granted, Uncle $crooge may never have been put to a double-blind clinical trial, but I submit such slick, just-bought, unsullied funny book covers were palpably salubrious. Just the sight of McDuck swimming in moolah made me feel like a million bucks. And therein lay a fly in the ointment. Cool heads played their comics with calculated indifference, and kept that jumbo plastic mixing bowl for puking close by, a little longer than necessary. Like two extra days, maybe. Two could play at sickroom stagecraft.

All right, I didn’t mind the predictable dose of coloring book and box of Crayolas. How many colors was indexed to your temperature deviation from 98.6, an imprecise calculation.  Roughly, mild sickness translated to an eight-pack of primary colors goosed with a few earth tones. Fevers north of 100 could significantly pump up the palette. Silver and gold were hard-nosed crowd-pleasers. More gratuitous crayons like chartreuse and ochre gradations filled out the box, but hardly ever left it.

Just to be clear, crayons weren’t the biggest palliative deal for me, essentially a sick treat Popsicle that didn’t melt. My real issue was with coloring books. These lost their luster about the time I stepped over the lines and began drawing dinosaurs and rockets and A-bomb explosions on my own. I’m sure that’s all been standard coloring book fare for decades, but 1950s coloring books ran to bunnies and baby chicks, stuff you, above an early age, needed to be seriously delirious or a flat-out baby to deign to lift a Burnt Sienna. Now-now, don’t take it personal. Maybe you crossed Funny Bunny’s eyes and drew a Hitler stash on Chicken Little. Not saying youwere a flat-out baby, so keep your bib on, Buster Brown.

Also not saying today’s lockdown kids have it easier. Not at all. While 1950s quarantine life was strange and sometimes frightening, from my kid point of view, it was a localized strange, a bad patch to be weathered in a safe place, not an angry rent in the fabric of reality beyond my apartment. No matter how many digital diversions, 2020 children can’t block out the roiling political pandemic stew, that Gray Goo overtaking the outside world.I regret I can’t question my parents about their Nineteen Fifty-Sick points of view, so I checked what little record remains, a period drug company handout notecard, stuck in a family album.

Within three years I contracted four then-common childhood diseases, two back-to-back in successive months. Knowing my parents, members of the “Greatest Generation” who would scorn the label, I suspect neither would warm to the subject. They’d probably shrug. My mom might suggest a saltine and a nice orangeade. My dad? “Do me a favor. Take a powder and go buy yourself an Uncle $crooge.”