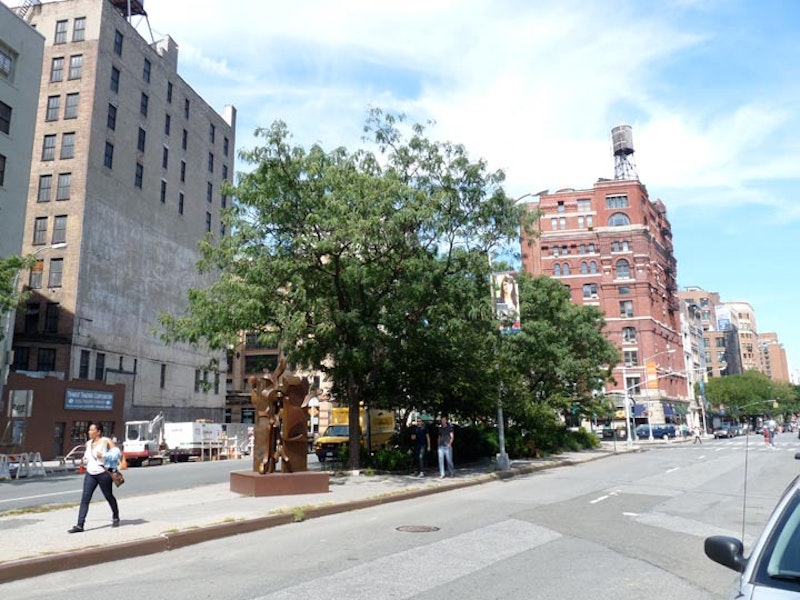 If you’ve never heard of Finn Square, that’s understandable. In NYC parlance, a “square” can be any shape, and Finn Square is a triangle in Tribeca formed by the intersection of W. Broadway and Varick and Franklin Sts. Officially, there’s no actual neighborhood called Finn Square, but there’s enough distinctive architecture and unusual surviving artifacts to designate it as a distinct region.

On the Lower West Side of Manhattan, there are two separate street grids, one that hews to a general east-west-north-south orientation (though Manhattan Island runs a little northeast against true north) and a diagonal grid that begins just north of Canal and runs north to W. 14th. This grid is positioned so it runs perpendicular to the Hudson River shoreline. (There are variations in orientation of this diagonal grid in he West Village, especially between Christopher and Bank.)

Where these two grids meet, there are interesting intersections and streetscapes. W. Broadway acts as the barrier between the two from Chambers north to Canal, with 6th Ave. dividing the two grids from Canal north to W. 8th since it was extended south from Carmine St. beginning in 1928.

Finn Square honors two Finns. The first was a Tammany Hall politician, Daniel E. Finn (1845-1910), known as “Battery Dan” for his success as an assemblyman in the First District for helping block a plan to build piers along the west shore on Manhattan in Battery Park. The piers weren’t built and Battery Park remains an open space relief from the beetling towers of lower Manhattan. As a judge, Finn was known for protecting the public against Police Department excesses.

Although Finn Square was named for “Battery Dan,” officially it’s named for his son, Philip Schuyler Finn, a member of NY’s Fighting 69th Regiment, who perished in World War I. The square was created shortly after the war, when Varick St. was given a southern extension past Franklin St. to meet W. Broadway. 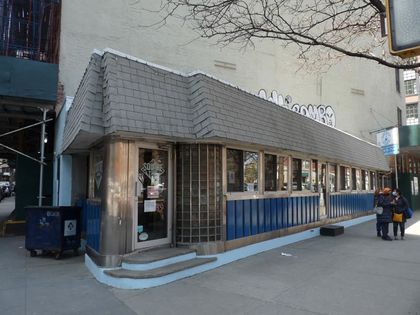 Classic, railway-car shaped diners are scarce in Manhattan (and to a lesser degree other boroughs) since the Bloomberg Era ushered in Luxury City. Property owners and developers look with disdain on diners, diner fare, and diner customers. They believe the real estate taken up by diners is best used for real moneymakers like banks, chain stores, or high-rise apartment buildings.

The standalone classic diners that were well-known even a decade ago like the Moondance (6th Ave.) or the Cheyenne (9th Ave. and 33rd St.) Munson and River Diners (11th Ave.) were forced out and new projects built in their place. Diners that occupy the ground floors of buildings like the Tick Tock, in the New Yorker Hotel at 8th Ave. and 34th, have fared better, but all are in danger. Some, like the Empire (10th Ave. and 22nd St.), M. Wells in Astoria, and Relish in Williamsburg, have adapted by offering more expensive meals at higher prices. But it never seems to work.

One of Manhattan’s diners bucking the trend is the Square, at Varick and Leonard Sts. in Tribeca. Both the illuminated sign and comments I heard from the manager indicate that it has been here since 1922. However, the diner itself was manufactured in 1947 by the Kullman Dining Car Company. It was originally called the Triangle Diner, which makes more sense re the overall shape of the building’s footprint. This location may be relatively immune to immediate redevelopment, given the small, odd-shaped plot. The Square closed during the pandemic, but a sign on the door says it’ll reopen in spring 2021; we’ll see. 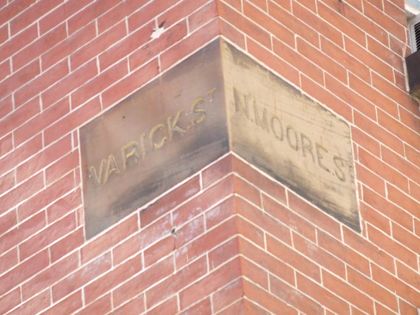 There are still well-read West Villagers and Tribeca-ites who insist that N. Moore (which always appears rendered like that on new and old street signs—never North Moore) was named for Columbia College librarian from 1842-1849, Nathaniel Moore. Columbia later moved uptown to Broadway and 116th, where it’s presently devouring the west end of Manhattanville.

There was one hitch when it was time to honor Benjamin Moore. Manhattan already has a Moore St. near the Battery, named for nearby docks in its original Moor Street spelling. So, as the location was generally north of there, the N. was affixed to the Moore. 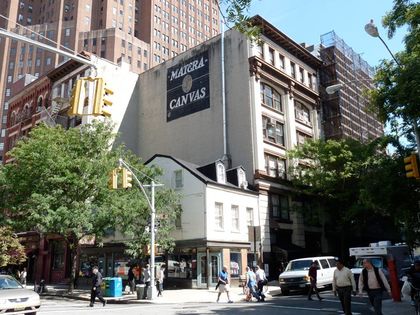 Because of landmarks preservation, the designated #2 White Street, at the northeast corner of W. Broadway, has survived since 1809. It was constructed that year for a Gideon Tucker, owner of the Tucker & Ludlam plaster factory. It’s one of the few Federal Style row houses remaining in lower Manhattan. A few others that were moved from their original location during construction of Independence Plaza can be seen on Harrison St. west of Greenwich.

The corner store at what the owners call 235 W. Broadway is officially home to an outlet of Todd Snyder, menswear designer, and a glance in the windows will make apparent that it’s a haberdasher. Beginning at the turn of the century it became fashionable to not hang an identifying sign—you have to enter to find out what the name is.

Signs of the store’s former use are still in evidence. In 1941, Leonard Hecht opened a liquor store on the ground floor that continued in business until the 1990s. The Liquor Store Bar then took it over, then J. Crew in the 2000s, then Todd Snyder. Throughout, the old liquor store signs have been permitted to remain in place including a still-working neon sign as well as etched glass signs indicating “cordials,” “cognacs” and “imported and domestic.” 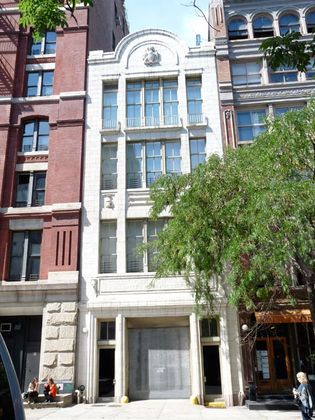 At 226 W. Broadway is a notable 1912 building featuring a gleaming white terra cotta front. Formerly the FDNY High Pressure Service Headquarters, it was later transferred to the Dept. of Water Supply, Gas and Electricity. I’m attracted to gleaming white terra cotta. It was built for the then-NYC Department of Water Supply, Gas, and Electricity as a headquarters for the repair company of the high-pressure fire service system. It was designed by Augustus D. Shepard Jr.

The building’s notable for its representations of items associated with NYC’s water supply, such as fire hydrants, hoses, pipes and valves, and for the exquisite chiseled lettering above the front entrance. 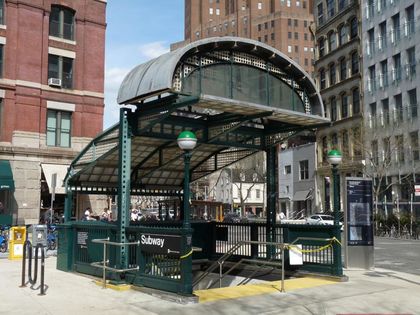 I have a fascination with the Franklin St. subway station, a local stop on the #1. It opened in July 1918 and has some interesting wall tiling not seen elsewhere on the line, likely from renovations in the 1990s. The unique location of the entrance at Finn Square in the triangle formed by Franklin and Varick Sts. and W. Broadway allowed architects to get creative with a wide glass and metal “headhouse.”

Aretha Franklin (1942-2018) racked up hits in four decades. Upon her death the MTA Sign Shop installed a tribute to it using their general sign design, though I’m surprised they didn’t employ metal signs that would be easier to eventually remove than the pasted ones they did use. 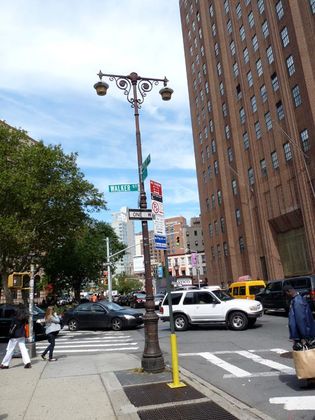 A cast and wrought iron Twinlamp stands at the SW corner of 6th Ave. and Walker St. It’s listing to the starboard side a little, and its top finial has been missing for a while. “Twins” were the first genre of cast iron streetlamp to appear in NYC streets. They were installed (in a different style) on 5th Ave. beginning in the early-1890s, and 5th had been their chief bastion until 1965, when a new genre of posts, used only on 5th, replaced them. Other than that, the Twins were used sparingly, though they did turn up on broad roads with central dividers, like Queens Blvd. and, I believe, Bruckner Blvd. in the Bronx. This Twin was installed no earlier than 1928, the year 6th Ave. was extended south into Tribeca.