Kim Addonizio on Top of the World 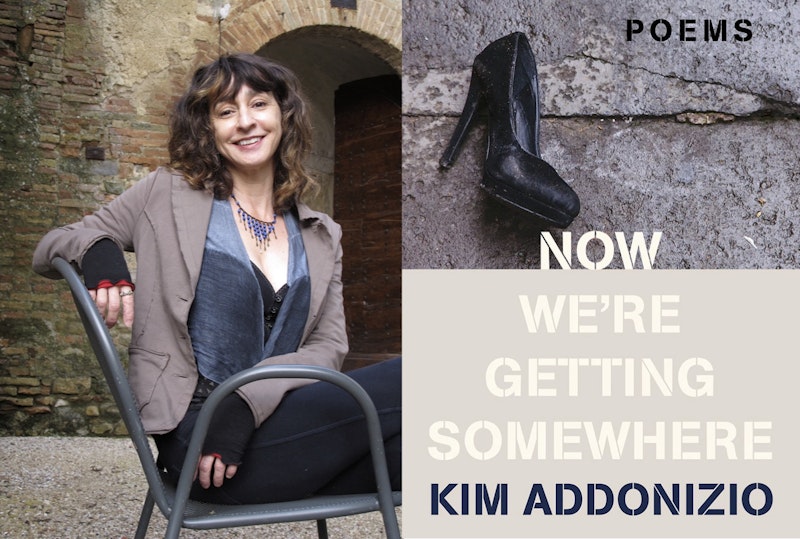 Kim Addonizio is one of the bestselling contemporary poets in America, and she does so by staying out of the academic grinder. The result is that she’s not only read by the coastal literati, but also keeps the “street cred” of outsider poets, from where she first gained notoriety. The result, once again in her new collection Now We’re Getting Somewhere, is gutsy poems that are also funny and accessible.

Addonizio is also an essayist (Bukowski in a Sundress) as well as a writer of short fiction (most recently The Palace of Illusions), with two nonfiction books on and about the writing process, Ordinary Genius and (with Dorianne Laux) The Poet’s Companion. But she’s known as a poet. She invokes many of her influences by name in Now We’re Getting Somewhere: Plath, Sexton, Colette, Woolf, maybe especially Dorothy Parker, with whom Addonizio shares a cynical, sarcastic, dark humor, displayed in her homage to Parker, “Resumé,” (after the famous Parker poem of the same name):

And don’t give a damn.

Addonizio describes her poetry in the poem “All Hallows” as “laying a golden sheen over the paper, inviting people in/to the dirty gas station bathroom of your performative loneliness.” Although Addonizio is perhaps a little hard on herself, and “confessional’”poetry, fans love her for the poems about love and desire and how love and desire finally don’t work. Or how they can’t live up to our expectations, or life circumstances (like in Jimmy & Rita). In Now We’re Getting Somewhere though, while all that’s in full force, Addonizio is now looking at the bigger picture, to politics and the world. What she sees is not good, and while these poems were probably mostly written during the Trump years, there’s only one vague mention of him, and not by name. Instead, these poems of despair seem to fit perfectly under the Biden administration where, and as she writes in the end of “Signs,” “everything is going to change for the worse.”

Addonizio captures the despair many poets and writers must feel these days: how to respond to world events in which no one feels they have much control. Addonizio enters into the field of ecopoetics: not “nature poetry,” but  poetry about the human effects on nature, like in these excerpts from “The Earth Is About Used Up”:

like a sodden tampon & no place to throw it away

hole in the floor

The earth is about used up, is the point I’m trying to drunkenly steer

through the potholes streets

into the suburban garage of your ears

though you probably already know what’s up with the earth, but I am

Even the ocean is gasping for air

while someone smokes a cigarette through their throat-hole

I’m standing on that box with my teeny megaphone, bringing you the news

wildly virtue signaling waving my mortal handkerchief dropping it at your

I love Addonizio’s dig at liberal “virtue signaling” which is a political critique of those stressing the importance (or, pretending to) of focusing on “social justice” in politics and the media. The result is that meanwhile “the ocean is gasping for air” and no one cares. Or, if some of us care, it’s not part of the media narrative.

That’s about as overt, politically, as Addonizio goes, for now. Though surely the connections are here in Now We’re Getting Somewhere: world events, climate catastrophe, affect our lives, in large and small ways, and therefore our relationships. The book title is sarcastic: we’re not getting anywhere, neither in the microcosm of relationships, or in the macrocosm of politics. Poetry may or may not be a “tiny megaphone” for either scale, or even offer solutions, but Addonizio is modeling a way to think about them as interrelated. We all think that we don’t want to be up on the box “bringing you the news” but as Addonizio demonstrates, we have a choice.