My Own Private Idaho

My motives for seeking office were pretty straightforward. 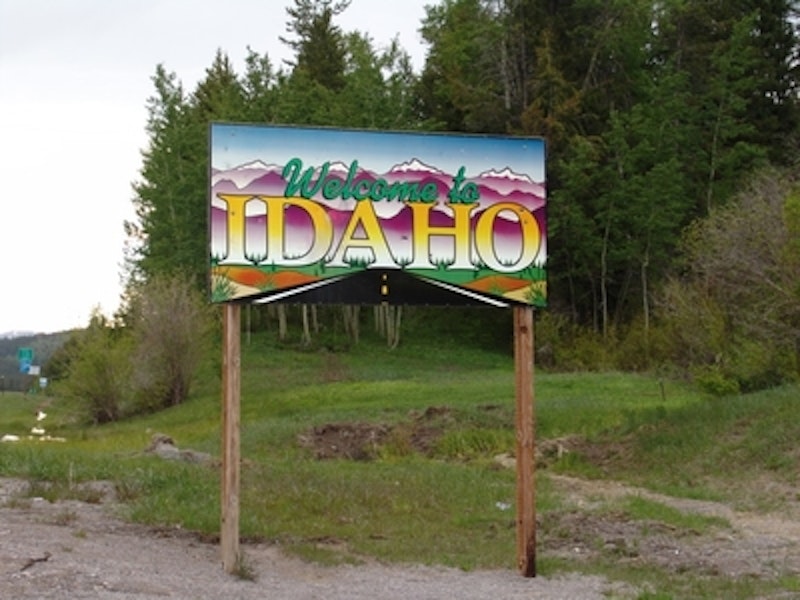 To paraphrase the opening lines of Edwin O’Brien’s The Last Hurrah, it was early in August 2009 when I decided—or rather, announced my decision, which actually had been arrived at some months before, to run for United States Senator from Idaho. This was a subject about which there had been no speculation whatsoever, as I then lived in Brooklyn, New York, on the other side of the continent.

I have never been to Idaho. For that matter, I’ve never been west of Buffalo, New York, and even then, some 38 years ago, when I made my single visit to the Queen City of the Lakes, I didn’t even go down to the waterfront to see Lake Erie.

Why did I do this?

My motives for seeking office were pretty straightforward. It had been summed up back in my college days by a fellow student who delighted in contesting elections which the campus politicos had already arranged to be uncontested: “Don’t let them get away with it.”

In 2004, Idaho’s Sen. Mike Crapo had been unopposed for re-election. He had no opponent, either at the primary or general elections. The Democrats failed to step up to the plate and so the Senator had a free ride. This is not Sen. Crapo’s fault. From all reports, he’s affable and honest. Sometimes, that’s all you need to be a successful politician.

Until such time as the United States adopts the so-called Nevada option—“None of the Above”—in all its elections, so we can reject the bastards that the machines foist on us, elections should be contested.

The qualifications of Senators in Congress are set forth in Article I, Section 3, which reads:

No Person shall be a Senator who shall not have attained to the Age of thirty Years, and been nine Years a Citizen of the United States, and who shall not, when elected, be an Inhabitant of that State for which he shall be chosen.

The Supreme Court held the Qualifications Clause as an exclusive list of qualifications that cannot be supplemented by the states in U.S. Term Limits v. Thornton, 514. U.S. 779 (1995). Directly on point is Schaefer v. Townsend et al., 215 F.3d 1031 (9th Cir. 2000), in which the United States Court of Appeals for the Ninth Circuit, which includes Idaho, explicitly held that a state cannot require a candidate to be a resident prior to the time of election—which is to say, Election Day.

Finally, as a practical note, Hal David Styles Jr., who was a candidate at the 2008 Idaho Republican primary for U.S. Senator, was not an Idaho inhabitant at the time of the primary. The Idaho Secretary of State accepted Styles’ ballot application and filing fee and placed him on the ballot in 2008, much as he accepted mine in 2010.

As I had attained the age of 30 years a quarter-century before; I had been 55 years a Citizen of the United States; and, if nominated in the May 25 primary, I would’ve been an Inhabitant of Idaho on Election Day, which is when I hoped to be elected. However, the Constitution does not require me to be an inhabitant of Idaho prior to Election Day.

To be sure, I had no intention of going to Idaho before Election Day. That would cost money and take time from my job (I was then a disciplinary prosecutor for the New York City Department of Correction) and my limited private practice, devoted largely to consumer bankruptcy cases. Bankruptcy may not be prestigious but my practice fulfills the needs of my clients and creditors.

So I filed some paperwork with the Federal Election Commission to become a candidate. I dragooned an old friend to be treasurer. I felt that being my own treasurer would further marginalize an already marginal campaign. And in late October, the newspapers began noticing me.

On October 29, 2009, the New York Post printed an Associated Press piece about my long-distance campaign, quoting the Spokesman-Review. The state Democratic Party chairman, Jim Hansen, reportedly said he was confident his party would field a serious candidate in Idaho. Crapo aides said they didn’t know anything about me, but were ready for a battle if need be.

The Wall Street Journal’s “Bankruptcy Beat” ran “His Own Private Idaho,” quoting me as saying, “I’m a firm believer in contested elections, and I don’t think that the organization of the Democratic Party in Idaho has shown that it’s able to find even a non-credible candidate for the U.S. Senate against the incumbent.”

Then Lukas Alpert of the New York Post put me in his “Weird but true” column for October 30, 2009, claiming that “Somehow, ACORN must be involved.”

The reporters reworking the material from outside the Gem State seemed content to refer to Gus Van Sant’s My Own Private Idaho in the titles of their pieces. That was fine with me.

Getting on the primary ballot in Idaho is easy in comparison to New York. A candidate for U.S. Senator needs to file a declaration of candidacy with the Idaho Secretary of State and pay a filing fee of $500. This had to be done between March 8 and March 19. The primary would be held on May 25. Happily, the Idaho election laws permit filing by mail.

So, on March 8, 2010, I downloaded the declaration of candidacy from the Secretary of State’s website, filled it out, and went to my bank to have it notarized. I had to wait a few minutes, as usual: the business of the bank, after all, is banking and not witnessing my papers. The young man behind the desk watched me sign the paper. Then he briskly examined my identification and affixed his seal. He handed the paper back to me and murmured, “Good luck.” After purchasing a $500 money order at the post office, I mailed the form, money order, and cover letter to The Hon. Ben Ysurra, then Secretary of State, by express mail.

Some days later, I learned that a pleasant local businessman, P. Tom Sullivan, had also filed to enter the Democratic primary. Well, at least Sen. Crapo would have an opponent in November.

One unexpected result of my candidacy was an increase in the mail coming into my office. PostcardMania suggested that the experience of Stewart Gary, a school board trustee in Livermore, California, in blowing out two incumbents and getting more votes than any other board candidates in the last three elections might be repeated if I spent $299 on 5000 “super-glossy, full color, 4”x6” postcards.”

ESP Printing & Mailing, of Boise, Idaho, expressed “our appreciation for your political convictions and efforts to hold a position in the Idaho Government,” which mildly amused me as I was running for Federal office. They continued, “We are aware of the many sacrifices you and your family will endure throughout the campaign period for the upcoming election.” ESP sent a flier for its printing and mailing services, including residential mailing list brokering “with names by income, age, children and lifestyle.”

Now, Idaho did not then enroll voters by party. A voter went to the polls on primary day and chose whether to vote in the Democratic or Republican primaries. This contrasted with New York, which allows registered voters to enroll in a party and vote only in the primary of the chosen party. This has allowed mailing services to develop prime voter lists—lists of the voters who turn out, primary after primary. It saves money on bulk mailings because you’re contacting the committed voters most likely to actually show up at the polls. It also means that, if one belongs to a family of prime voters like mine—my mother and her sisters even voted at school board elections back home in upstate New York—one gets a lot of campaign mail, slick, glossy, pretty pieces of pretty empty paper.

VictoryStore.com of Davenport, Iowa, sent an elaborate glossy catalogue, “Winning the Tough Ones,” showing examples of their many wonderful yard signs, car door magnets, and campaign apparel and gear, such as coffee cups, not to mention polling services.

Then there were the letters. These fell into two categories. First, there were the schoolteachers asking me to speak to their classes, such as Melanie Hutchinson at the Magic Valley High School in Twin Falls. I always sent my regrets, couched as politely as possible. Second were the various Tea Party groups. I have a prejudice: any group which claims to speak for “the people” is probably either on the make or afflicted with hubris. They too received polite and truthful responses.

Primary Day was May 25, 2010. After 10 p.m. Eastern time, the results flowed in quickly. The picture was clear from the beginning. When the votes were totaled, P. Tom Sullivan had 18,316 and I had 6222. I’d been beaten three-to-one. Still, I polled 49 percent of the vote in Cassia County.  I polled votes in every county in the state. For a few hours, the mainstream media led me to believe I’d been Johnsoned in Clark County, but thanks be to God two worthy citizens must have staggered to the polls at the last minute and voted for me.

Johnsoned, you ask? Richie Johnson attended my college. He’d been elected to the student legislature in a year when almost no one had run for anything. His career was undistinguished and he was often absent due to intoxication, but he sought re-election nonetheless. On Election Day, he was recovering from various self-experiments with chemicals and forgot to get out of bed, let alone vote. That was a pity, because no one else voted for him, either. Hence, Johnsoned.

All’s well that ends well. Mimi and I didn’t have to move to Idaho.

The last echo of the campaign, for me at any rate, came shortly after the elections in November. My campaign treasurer was first to note that Mike Crapo polled 71.2 percent, P. Tom Sullivan, 25 percent, and Randy Lynn Bergquist, the Constitutional party nominee, polled 3.9 percent. Clearly, some rounding occurred in calculating the percentages.

One can only speculate. P. Tom was probably recruited to run by the leaders of the local Democracy with a wave of what Winston S. Churchill would have called terminological inexactitudes: we’ll give you all the support we can, or something like that. Once he was in the race, those promises may have remained unfulfilled. Perhaps P. Tom learned a valuable lesson: that politicians sometimes don’t keep their promises.

I was mildly amused by the final result: the Idaho Statesman had me polling 35 percent against Crapo in a theoretical one-on-one matchup back in May. I might’ve done better than P. Tom without showing up before Election Day.