Statues of the explorer abound in NYC. 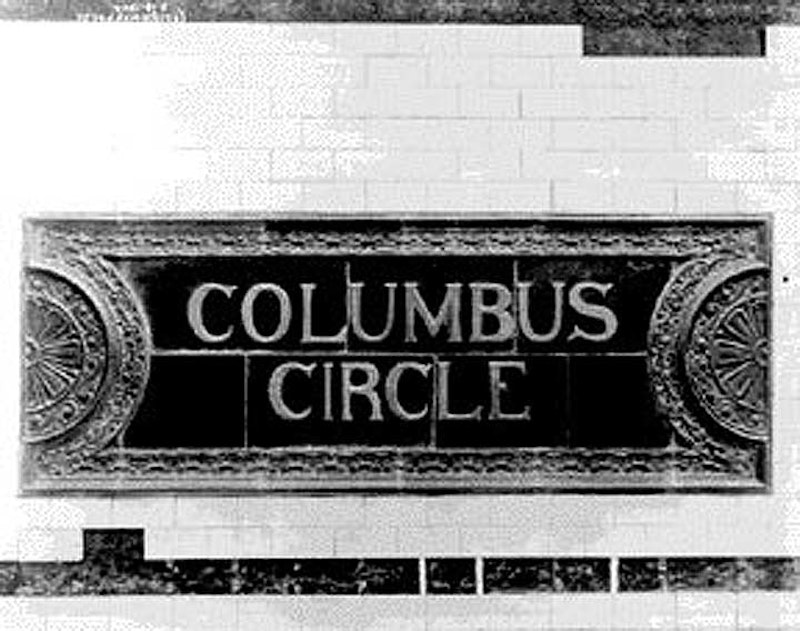 When the Columbus Circle subway station was renovated from top to bottom between 2007 and 2012, several original elements in the wall signage were uncovered. Thankfully, these bits of historic entablatures have been preserved and currently reside, now enframed, on the northbound station platform.

One of the IRT’s “original 28″ stations constructed in 1904, Columbus Circle, has been a hodgepodge in appearance since the 1930s, when a transfer to the new IND (in current parlance, the A, B, C, D trains) running up Central Park West was added.

For example, all the original “Columbus Circle” terra cotta plaques, one of which is seen above, were removed during the 1930s renovation. In a further bit of embarrassment, more than half the station was dealt rather anonymous, functional tile work with “just the facts ma’am” station identification in the 1950s. In the 1990s and early 2000s, Columbus Circle’s sister stations at 50th Street and 66th Street-Lincoln Center were given star-treatment renovations, but Columbus Circle, a complicated platform built on a curve, was left off the list. In 2007, the MTA finally began renovations, after the 2005 opening of the new Time Warner Center, and knocked down a lot of ancient tilework, revealing what lay beneath. 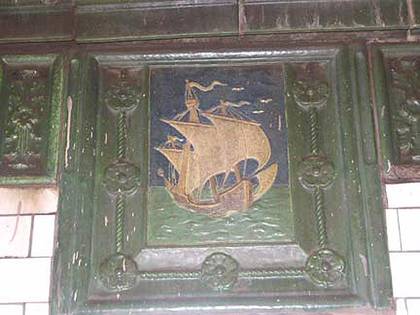 The Columbus Circle station features Grueby Faience-manufactured plaques placed on corners. The plaque depicts “the great navigator’s caravel” according to The New York Subway: Its Construction and Equipment, the book published by the IRT in 1904 when the subways opened. It is likely not the Santa Maria, which was larger than a caravel and had a topsail. 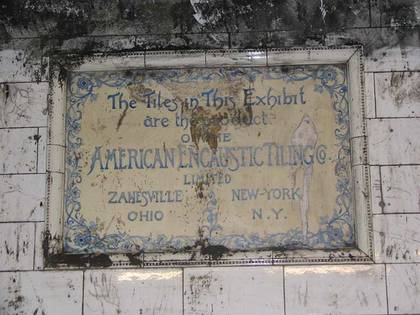 The real find, of course, was the exposure of a curious plaque placed by the American Encausting Tiling Company with Art Nouveau, Aubrey Beardsley-esque lettering and ornamentation. As the sign indicated, American Encaustic was founded in Zanesville, Ohio; the year of founding was 1875 and attempted to compete with glazed, embossed, and later faience tiles manufactured in England that found use on building exteriors, as well as around fireplaces. “Encausting” is paint mixed with beeswax and resin applied in high heat; such paint was applied to the tiles as a finish.

American Encaustic did not win the contract for Columbus Circle, which like many other early subway stations went to the Grueby Faience manufacturing company. Fortunately the MTA has preserved the old plaque, which became part of a protected exhibit after the Columbus Circle renovations, which included replications of the original name plaques, were completed.

Monuments to Christopher Columbus abound all over New York City. In addition to the Columbus Circle monument, donated by Italian-language newspaper Il Progresso on the 400th anniversary of the captain’s arrival in the New World, there are statues in Central Park and downtown Brooklyn;  a bust sculpted by the Piccirilli Brothers, one of whom, Attilio Piccirilli, executed the Daniel French portrait of Lincoln at the Memorial, on Arthur Avenue in the Bronx; major avenues on Manhattan’s West Side and Brooklyn’s Bensonhurst; as well as indirect honors, such as Columbia University.

If Mayor Bill de Blasio and City Council President Melissa Mark-Viverito wish to demolish all representations of Christopher Columbus in New York City as “representations of hate,” they will have some heavy lifting to do, indeed.