They don’t build real estate like this any more. 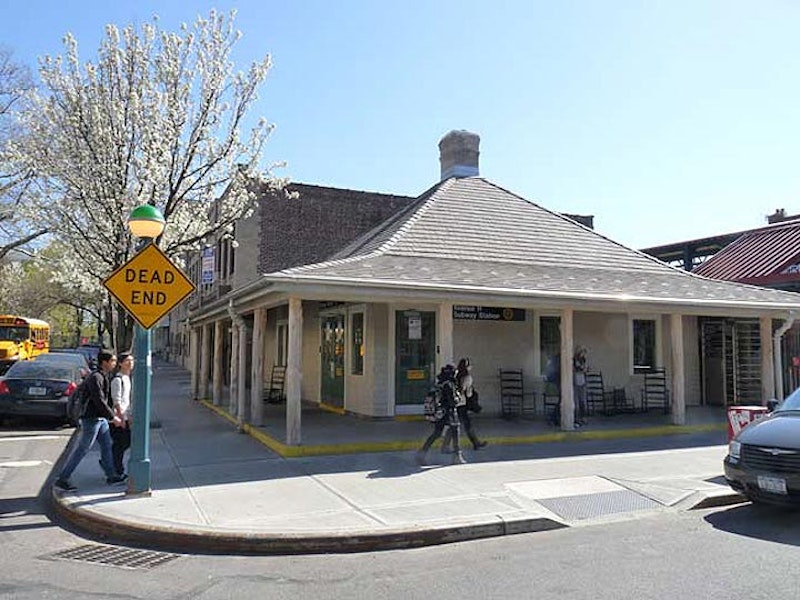 The present B/Q line tracks between Prospect Park and Brighton Beach were originally a part of the Brooklyn, Flatbush, and Coney Island Railroad, which ran between Prospect Park and the Brighton Beach Hotel beginning in 1878. It became a part of the Brooklyn Rapid Transit Company (BRT) by 1900. The station house had been the Thomas Benton Ackerson Co. real estate office for Fiske Terrace, the attractive development of houses running north from Ave. H. The Ave. H station opened in 1907 after increasing population in the area necessitated a new one; it’s the only such station remaining from the time when steam trains plying the Brighton Line ran at grade. Brooklyn Rapid Transit built the open cut, which runs between about Ave. H and Prospect Park, between 1905 and 1908, and streets were built through in the subsequent decade.

By 2010 the Ackerman station building was in danger of complete collapse, with a sagging roof and dangerously deteriorated wood floors. To shore up the roof, a tie rod with steel beams was installed. The wood floor was removed and a safer concrete floor was built. The building was closed between late 2009 and the end of 2011 while the renovation was done. 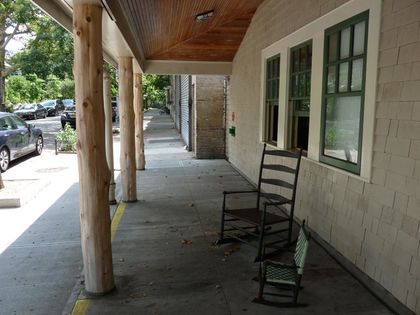 The wraparound porch was completely removed and subsequently rebuilt with the supporting columns again resembling the bare, peeled logs that were featured on the original. A neat touch was the introduction of Shaker-style, individually designed and painted rocking chairs designed by local architect Ed Kopel, whose installation is called Brooklyn Bucolic. Though the chairs are usable by the public, they’re attached to the pavement and can’t be removed. 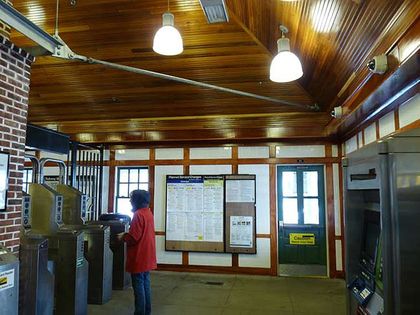 The real revelation is the interior of the stationhouse. Before 2010 it was plain with a neutral beige paint job and exposed meters and electrical boxes. The chimney was given a brick covering, new lighting was installed and the ceiling received a beautiful finished wood ceiling treatment. Windows were reconstructed and a tile finish was built on the walls. The station now has the look and feel of a suburban rail station, which was its purpose beginning in 1907 after Ackerson Real Estate vacated the building after all its properties had been sold.

The station renovation was part of an overall rehab of the Brighton Line for the stations between Newkirk Plaza and Sheepshead Bay. New platforms, wind screens, lighting and fare areas were built so that these stations are now state of the art for exterior MTA subway stops.

At Ave. H, the southbound side wasn’t neglected. There was no station house previously, so a new one was built featuring a Metrocard machine. The sole “token booth” remains in the rehabilitated Ackerman stationhouse on the Manhattan bound side. 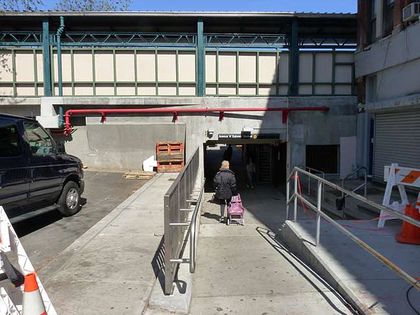 When I lived in Brooklyn and bicycled out to Midwood, the Ave. H station was valuable. Ave. H is interrupted for vehicular traffic for the Brighton Line, which is built on an embankment. While some avenues were depressed to go under the rail line, others such as Aves. H and I just end. However, there’s a pedestrian underpass that is also used by bicyclists. 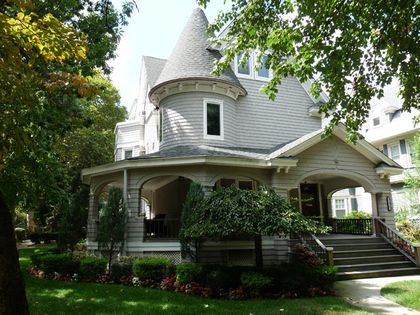 The station house is located in the midst of a NYC Landmarks-designated neighborhood of Fiske Terrace. According to the Historic Districts Council, in 1905, the T. B. Ackerson Company purchased a densely wooded tract of land and immediately cleared it, laid out streets and installed underground water, sewer, gas and electric lines. Eighteen months later, the former Fiske estate had been transformed by some 150 custom-built, detached, three-story suburban houses with heavy oak ornamental mantels, staircases, beamed ceilings and built-in bookcases, ornately bordered parquet floors and elaborate cabinetry. A landscaped median and hundreds of street trees planted at the time of development continue to contribute to the idyllic feeling of the neighborhood.

They don’t build real estate like this any more.