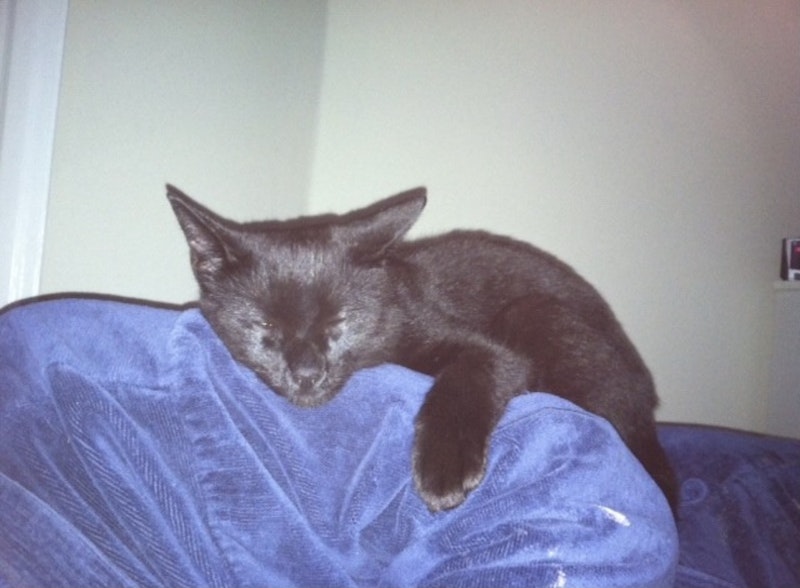 One night in late July 2019, my cat Sebastian didn't return from his night patrol of our property in Antrim, New Hampshire. I searched for him along the roads and woods within half a mile of the house. He’d always come when I called his name. Now he didn’t. After several days, I concluded that he was killed by a predator.

I’d known Sebastian from the moment he was born. Minerva, his mother, our first cat, insisted that her humans be with her as she gave birth. He was the youngest of her three kittens, black with a small white patch on his chest. I fancied that he’d entered the world dressed in formal dress, black tie and dinner jacket.

He’d been the first kitten to scale the walls of the cats’ basket and wobble across the wood floor. I was typing one afternoon when I noticed him climbing onto my slipper, where he fell asleep. That’s how tiny he was, and fearless even then. I didn't move my foot for 90 minutes until he awoke and groggily moved on. A week or so later, I awoke to find him crawling over the counterpane toward my face. He must’ve climbed from the floor. Imagine going 80 feet vertically using only fingers and toes. He stopped, just in range of my hand so I might pet him, unleashed a loud bass purr as I gently stroked his head, and then curled up to sleep.

We then lived in a small town house in Bay Ridge, Brooklyn. As the kittens grew older, in common with their mother they freely came and went out the back door, which was propped open during the day. They’d quickly charmed our neighbors, several of whom occasionally gave them treats. Sebastian ran from one house to another, climbing vines to the roofs and then leaping from roof to roof. Often, he popped through the open window of our upstairs neighbors, who came to love him as we did.

And he loved them, too. Every day or so, he’d sit by the front door of our apartment. I opened it, we walked together to the foot of the stairs, and he trotted up, knowing he’d be welcomed. Later, he’d come home, scratching at the door to be let in. When our upstairs neighbors moved, this ritual continued for another week or so. Finally, he’d sit at the foot of the stairs, gazing upwards without moving. I let him grieve.

As he matured, I realized that whenever he saw me he walked up to greet me. We bumped heads at least once a day. At night, he snuggled up to me, helping me fall asleep with his deep rumbling purr. I quickly began referring to him as “my little guy.”

Sebastian had infinite curiosity, an immense capacity for love, a nearly clairvoyant insight into human character, unshakable loyalty, and great courage. They were the admirable qualities one would like to see in one’s children.

He looked out for his mother as she was dying of inoperable tumors in December 2016, shouldering the others aside until she’d had enough to eat. For years, he also protected Bolingbroke, the shy, sweet, lame little feral tabby who’d adopted us back in Bay Ridge.

After we moved to New Hampshire in 2016, Sebastian seemed moody and out of place. He expressed himself in what the professionals call “inappropriate micturation.” I was preparing my clothes for the dry cleaner one morning and the same sweet little fellow who’d snoozed at my side the night before walked up to the pile, made eye contact to be sure I noticed him, raised his tail, and urinated on my clothes. Then he stalked off, sure that he’d made his point. Whatever the point was, he’d gained my attention.

I noticed that he loved to patrol the area around the house. So I let him out at dawn and dusk for his little patrols because they seemed to give him a role in family life. They made him happy. He never went far. If he heard the call of the wild, he didn’t answer.

Two incidents come to mind. One night, Sebastian woke me from a sound sleep. I knew it was him. He ran to the bedroom door and preceded me downstairs. I didn’t see him when I reached the first floor. I assumed he’d gone to the kitchen. He wasn’t there, either.

I heard a rapid scratching outside the back door. It was Sebastian. I opened the door; he raced in, and began eating some dry food.

Was the Sebastian who woke me part of a dream? I don’t think so. The cat who woke me was real. He was as much a tactile reality as the rug, the wooden floor, the staircase.

Yet I found him outside. I know we’d locked up the house. He couldn’t have gone out after waking me. Perhaps this was the sole occult experience of my life up to now: a cat projecting his avatar into the bedroom while waiting patiently outside.

The other incident was also nocturnal. I was awakened by yowling outside the house. I went downstairs, grabbed a flashlight, and headed out through the side door. Some bushes rustled. Then I saw an animal, about 2½ feet long, silhouetted against the glare of the single street light down Clinton Road, wasting no time climbing a tree. I shone the flashlight on it. It was a fisher. Fishers, which are related to martens or weasels, have a feline cast of feature: hence they’re sometimes called fisher cats. They’re voracious, aggressive carnivores as ferocious as a badger.

The fisher vanished into the foliage. Quiet reigned. I returned to the house. There was a scratching at the back door. I unlocked and opened it. Sebastian entered, stopped, and began removing fur from his claws. Perhaps Sebastian, weapons at the ready, had ambushed the trespasser with teeth and claws and forced him up the tree. It’s the only explanation I have for Sebastian’s surviving the encounter.

In mid-July 2019, I’d seen a fox about a mile and a half from our house during a walk. He was crossing Clinton Road toward the woods on Meetinghouse Hill and picked up the pace after noticing me. I didn’t know then that foxes have considerable hunting ranges. They’re efficient killing machines that prey on small animals, including house cats.

My last memory of Sebastian is loving and happy. I’d returned from an afternoon on horseback. I was slowly climbing the stairs to the deck and the door to the house. It was one of those "each riding boot weighs 30 pounds" moments. Sebastian was sitting on a wide banister just below my eye level. We looked at each other. I bent down. He stretched up. We bumped heads, very gently. Then I softly kissed the top of his head before I entered the house.

There have been worse final memories in my life.

That night, I let him out at twilight as usual to patrol around the house and return. He didn’t come home. The fox sighting may explain why I heard nothing that night: no screeches or outcries. It suggests Death, when it came for my little guy, was swift, silent, and painless.

Now we were down to two cats: the dominant Cordelia, the long-haired marmalade enchantress, and the easily intimidated Rosalind, a sweet, affectionate tortoiseshell, the first and now the last of Minerva’s kittens. Somehow, the feline population seemed out of balance.

A year went by, the customary period of mourning. I began searching the local no-kill shelter sites. It’s telling that, when we visited the shelters, the most sweet-natured and attractive creatures all had special needs, such as the affectionate orange tabby with a deep purr who was incontinent (not during our visit) and had figured his way out of every kind of diaper the shelter had found for him.

Finally, at the website of the Pope Memorial Shelter in Concord,I saw a small 10-month-old male. He was a big-eyed gray tabby with white legs, stomach, and throat. The description was positive: He’d been neutered, was up to date on his shots, and seemed quiet and shy. I went to the shelter. We met. He liked me. I was hooked.

Over the next few days, they interviewed me, gave me several forms to complete, and charged me a reasonable fee. Then came the day. I arrived in the parking lot, masked, telephoned the shelter, and handed the cat carrier to the pleasant volunteer, also masked, who had come to my car. She quickly returned with the cat in the carrier.

He was quiet on the way home. I brought him into the house and opened the carrier. He tentatively emerged and began looking about. We fed him some tuna filet. He engulfed it and began purring wildly as he bumped heads and rubbed against our handsand ankles. Then, as one might expect from a creature who’d spent most of his life in a small space, he ran about the house, full tilt. Now he was free to be himself. He began discovering the cat toys of which the other cats had tired and began batting them about. He still does: all life outside the shelter is a joy to him.

Cordelia observed him with her customary detachment. Rosalind jumped to the top of the washing machine and then to the shelf above it, where she knew she’d be safe from the swashbuckling intruder.

The shelter had given him a name; once he was here, Mimi chose a new name from Shakespeare: Hotspur. The name fit him. Until he suddenly tires and curls up, he still runs around the house, always at the gallop.