Looking at a building where I may someday die. 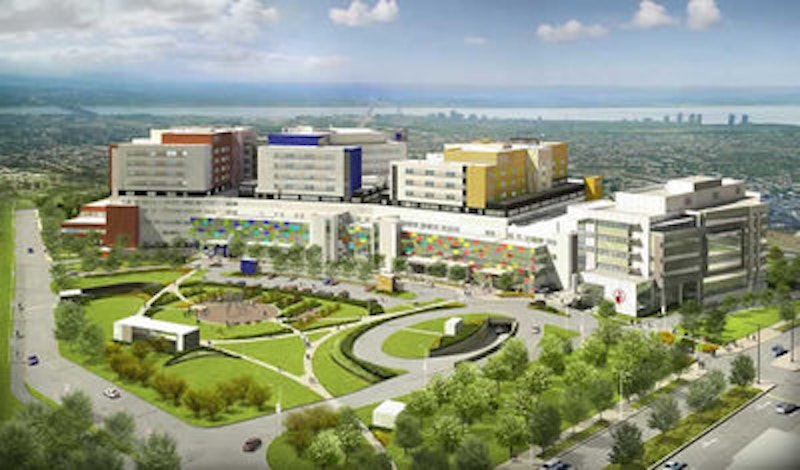 On April 26 the new McGill University Health Centre is set to open not too far from where I live. It’ll be a “superhospital” catering to Montreal’s English-speaking community while also serving as a teaching hospital and research center. I’ve seen the complex slowly built up on the lip of an escarpment south of the Vendome metro station. Now it’s ready to receive its first patients, a mere 21 years after it was first proposed. And the sight of the place provokes in me a distinct mix of gloom, dread and decaying hope.

Some of that’s to do with the project’s troubled history. The MUHC aims to replace a number of older hospitals in the western part of the city, while a similar project’s underway for a new French institution to the east. Both hospitals have faced major delays and cost well over a billion dollars. The English superhospital site used to house a train yard, which meant the place had to be thoroughly decontaminated before construction could begin, and that meant the earth had to be dug up and shipped away. This led to the first of numerous cost overruns.

As seems inevitable in this city, spending a large amount of money on public works led to charges of corruption: allegations of kickbacks have swirled around Arthur Porter, the former Director General and CEO of the project. The Porter saga’s a complex and surreal mess involving his appointment to a committee overseeing the Canadian Security Intelligence Service (despite his having no background in intelligence), a deal with a former international arms dealer for an infrastructure project in Porter’s native Sierra Leone, a self-diagnosis of cancer, civil and criminal court cases, an arrest in Panama, and extradition to Canada. You could say it all raises questions about the wisdom of the superhospital project. Or you could say it makes you wonder whether the project was a scam.

Scam or not, the MUHC is now complete, and should last for some decades at least. I can reasonably expect that in the years to come I’ll visit friends and family there, and quite possibly watch somebody I care for die in a room somewhere inside it. I am likely at some point to visit that place in pain and perhaps not come out of it alive. That’s far from inevitable; quite apart from the chance of my suffering a more sudden end, there are two other primarily English hospitals near me. But the odds are that the MUHC will play some significant part in my life or the lives of those close to me; that it will be the setting for bad news, pain, death—or, more hopefully, for cures, reprieves, the cessation of pain, even birth.

If that’s true for me, it’s also true for the rest of Montreal’s English community. The MUHC is a major institution that’ll touch any number of lives. The fates of patients will be determined there; the careers of doctors and nurses and more will move forward or backward there. We’re all going to be bound up with it, to varying degrees.

Even before it’s opened and taken in a single patient, it’s affecting the community around it. It’s too big not to. Walking along the south side of the mountain, you can look down at night and see the lights of the place blazing. In the day you can see it more clearly, thick, bright towers rising out of a curved base several stories high. How well will the colors hold up to high winds and grimy winters and passing years? I don’t know, but however it does, we’ll be living with it.

There’s another major construction project in the area about to get underway: a highway interchange to be knocked down and rebuilt. That’s projected to start this summer and continue until 2020. Have the new traffic patterns been factored into access to the superhospital? Is the highway planned to harmonize with the hospital’s footprint? How will the two projects together affect the amount of traffic on relatively narrow residential streets nearby?

It’s true that the new hospital means an upgrade in medical technology. In theory, at least, it means that the most modern thinking about health and wellbeing has been incorporated into a new physical structure literally from the ground up. Also some history’s been lost, as old institutions close up and buildings are repurposed. In theory, the good of the new should outweigh the loss of the old.

Even the best-designed hospital, built with the most rigorous oversight, will be a place where people will suffer pain. But then even the worst designed and most corrupt hospital will be a place where people will live in hope. It will be a place where some human beings will do their best to relieve the pain and illness of others, and therefore a place of idealism. In the case of this hospital it’s worth remembering, as a contrast to the corruption linked to its construction. There will be good in the MUHC along with the bad. Still, for the moment, it’s a reminder of mortality and of human frailty, a reminder of the passage of time.