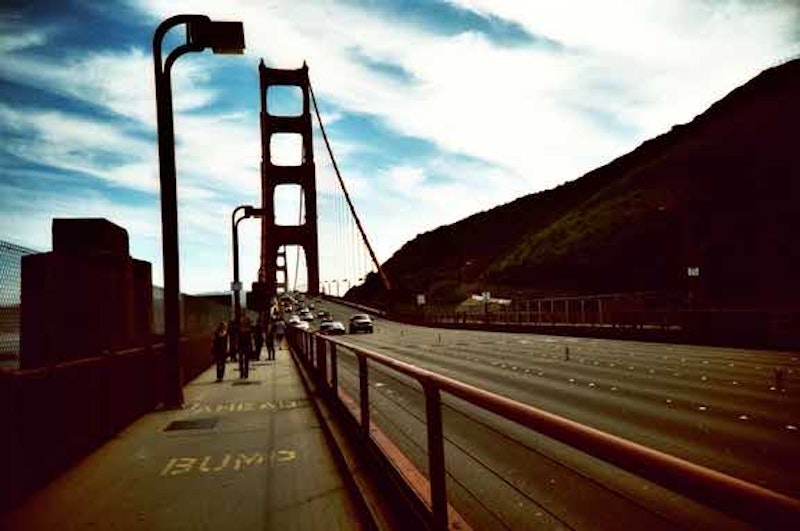 It was Tuesday and I'd known since Sunday that Daniel had secrets he wanted to share. He was going to lean over to tell me these secrets. We sat on the grass in the park. We had arrived at 11 am, at 1 pm he leaned over.

I have learned that all secrets fall into two categories: They are transgressions occurring in error of codified moral behavior or they are plans for desperate action. Daniel is in his mid-twenties and that is the optimal age for secrets. For men in their mid-twenties most plans are nothing more than a fun romp which has found its way to paper. There is no time table. The plan simply is to execute before baldness strikes. Sometimes there is a consistent theme throughout. Daniel's was vehicular. After his English teaching gig ended he was going to live in an RV. I asked him where. He told me he would do this on the streets of San Francisco. He knew people. I asked him if it would be too hot to do this seeing as his return would be in the summer. Daniel told me that he had thought about that. He gathered that every five days or so he could endure the summer sweat. The people he knew would surely let him use their shower on a weekly basis.

I asked him, "Why not live in a Volkswagen bus?" He told me that he had thought about that too. The problem with the bus was that it reached an equilibrium with the outside temperature too quickly in the morning. He had been an engineer before and now he wanted to sleep until noon.

"I'll be doing this after the motorcycle ride to Tahoe and back, of course, and you know if it's too hot or something I can just go to Tahoe first."

I knew Tahoe well though not by motorcycle. I sympathized with this component of his plan because I had seen Easy Rider. This was a distant relative of that film. I imagined it would be called "Diet Phantom of Easy Rider." The open road, the trees, the desert were the same. The countless stops at seedy truck stops would be more treacherous. The necessity of plunging into beef to avoid the commotion of asking for a plate of vegetables. I saw the endless stares from the swarm of Latino men gathered at the stairwells of each California motel as he would ascend with a svelte hitchhiker. The ritual of going into the room and locking the door would become natural but always unwelcome. I imagined Daniel somehow abandoning Tahoe. I saw him spiraling headlong into the chrome depths of a grey sky valley far past the Arizona border, encountering rain, stopping at the Grand Canyon, seeing a stray dog, adopting it, putting it on to the back of his motorcycle, and returning to San Francisco. Daniel had been in a state of reverie while I imagined these things. He wore sunglasses and looked now like a man succumbing to a stroke or one who had fallen into prayer.

Since the conversation had stalled my thoughts turned to San Francisco. I remembered my own trip there. I had arrived by way of Fresno County on an infinite highway that cartographically begins at the Oregon border but may as well have started in Alaska. The twilight sky of the highway is always the color of Neapolitan ice cream. The power lines do not end. I have a photo of a moment in that eternal landscape. This photo will outlive me and that moment. I filed that knowledge away. I had to get back in the car to start it. My svelte hitchhiker got in with me.

Had San Francisco not been a logical stop over between Northern and Southern California it would have likely been avoided. My passenger and I were both poor and had we not been wary of highway criminals we would have willingly slept in the car. Finding a hotel in the Bay Area without a reservation is not recommended. Finding a hotel without a reservation that will not gouge you on price is impossible. Finding a motel is more feasible when one is willing to observe that there is a unique humanity in junkies holding court with punk bands in parking lot U-Hauls. The Mission District is a tesseract of parking lot U-Hauls.

El Capitan has rates at $30 per night. It is the cheapest motel in the Mission District by far. This fact did not escape the local junkie and criminal population. For a place so majestic on the outside, its insides are nothing short of rotten. An argument immediately erupted between a long-term tenant of the building and the clerk on duty. The tenant wanted clean sheets. The clerk pretended to not speak English. The tenant flashed crisp $20 bills. "This is for after," he said. I saw a similar thing in Barstow once, except that here there was no immediate mention of death or dying. Eventually the tenant settled his affair and left. The clerk eyeballed me and I returned a clean shaven grimace. "What do you want?" he said. I said that I wanted a room for me and my friend for the night. He glanced at her longer than any glance should last. "Okay," he said. I could challenge him to a duel or pay him $30, so I paid him.

Whereas Daniel's future living quarters had eluded easy definition my room at El Capitan did not. It was a room in a seedy motel. It was now my room because it was the only thing that I could afford. I stepped out of the room for air and to be out of range of a private phone call. There was a hallway and halfway down it was a chair. It appeared to be stolen from a grandfather's attic, checkered upholstery and all. Sitting in this chair I remember thinking about where I was going on this trip and where I was going with this person that was with me. How far can two people remain together peaceably while enduring a seemingly interminable sequence of poverty? Somewhere deep in my inquiry I concluded that aside from mitigating the blow to our individual egos, this was possibly what the bitter kernel of new romance tasted like. I was too deep in my thoughts to realize that I was sitting on a hive of newly hatched cockroaches.

In my many tellings of this story I always stop here because the real is always more jarring than the allegorical. Usually I am alone when this retelling occurs. Daniel was still with me yet also somewhere far away. "That's a good plan," I said. He would either find beauty down the road or he would not. I hoped that he would find it.