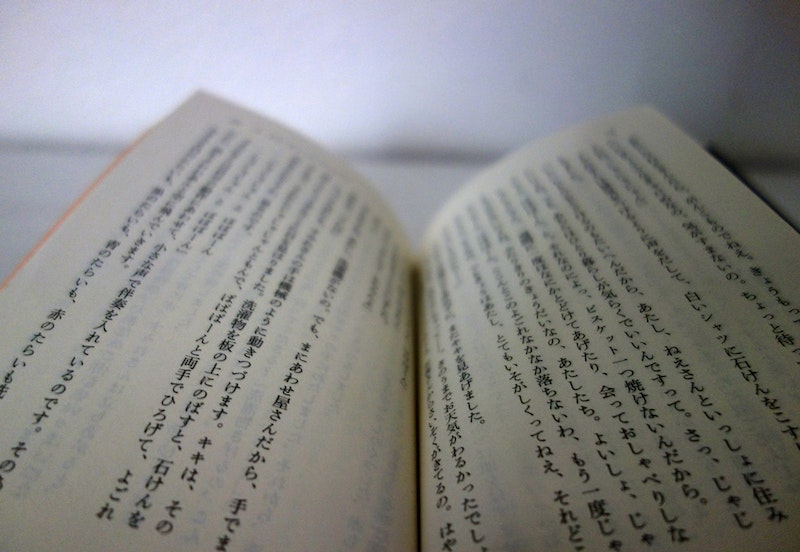 When my brothers and I were younger, we lived in Japan for a brief time. By the time we learned how to speak, we were nearly fluent in Japanese. Shortly after moving to America, we learned English. My mom tried to teach us how to read and write in Japanese, but we were too young and didn’t want extra studying. She’d buy these little books where you’d be given Japanese Hiragana to trace and then try writing out yourself, but we weren’t interested. Looking back, I find myself regretting such apathy.

I remember a time speaking Japanese with my mother and not having to pause when composing a sentence. It’s not easy to translate from English to Japanese, so I frequently broke off mid-sentence to ask her how to say “x” in Japanese. She used to speak to us in Japanese all the time when we were home, but after realizing that we’d always respond in English, she gradually stopped. I’d gloat in middle school that I was fluent in two languages, but that wasn’t really true. I could speak and understand Japanese, but had no idea how to read it.

I’d always held my love for Japanese language closer than my brothers; the summers we’d go to Japan to visit family meant we had to speak nothing but Japanese, and I was always left doing the talking. My brothers can understand the language, but I think they’re not confident enough to keep up conversation. It wasn’t until recently that I felt the urge to learn how to read.

I went to Japan in January to visit Felix in Okinawa. Usually, when I’d go there, my mom would accompany me and she’d take control. When we went out to restaurants, she’d order. At the train station, she’d go up to the ticket booth to purchase them. Luckily for me, I always paid attention to her when she’d do these things. The only problem was that a lot of activities in Japan require reading. Not all restaurants carried English menus, and not all signs are also written in English. On the 13-hour plane ride to Narita, I studied the phrases committed to memory in case I needed assistance.

When my mom and I landed in Japan, she told me how to get my ticket for Okinawa. This was my first time flying by myself. She ushered me over to a polite man behind the counter while I stuttered some broken Japanese before we said our goodbyes. The anxiety while waiting to board the plane was monumental. After landing in Okinawa and meeting Felix, I felt a lot of pressure. Felix didn’t know a lick of Japanese. I would have to do everything.

It went fairly well. Going out to restaurants, I’d ask for an English menu; I had no problem going into shops and paying for things, but would get frustrated when Felix picked something up and asked what it was. I’d look at the packaging and stare blankly at the unfamiliar characters before shrugging and handing it back to him. Vending machines were guessing games.

When I came back to America, I was determined to learn how to read Japanese. I scrounged the Internet, but couldn’t find a source that wasn’t dry and boring. I used my phone to download a bunch of random language apps, but most of them were trying to teach me how to speak as opposed to read. Finally, I found an app I liked: it’s called Memrise. There are lots of languages to choose from, and different lessons you could pick to try. What I liked most about this app is that there are devices to help you remember a character. Some are obscure, but they help.

Memrise has helped me to read Hiragana, which is a good start. I’ve also started texting my mom in Japanese to practice reading that way. I’m hoping that by the next time I go to Japan, I’ll be able to read every label, sign, and menu I encounter.