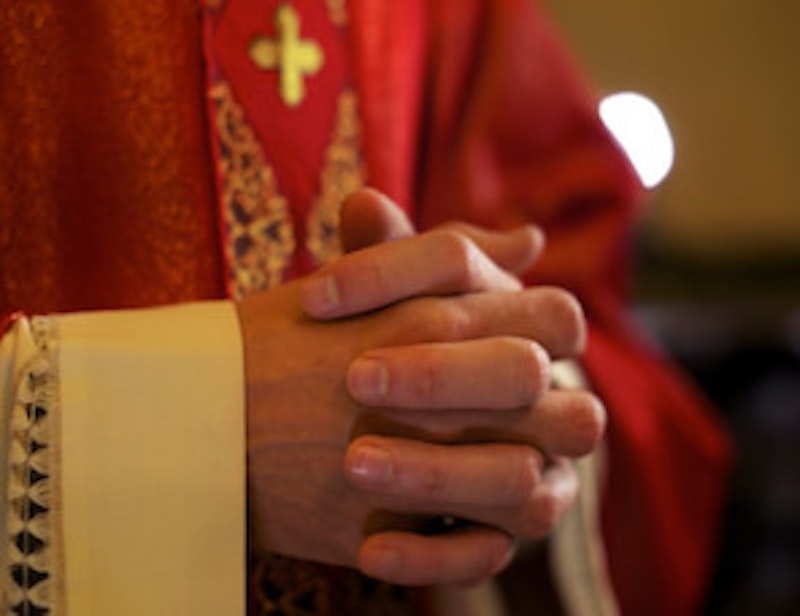 The latest Catholic Church homosexual sex scandal has rolled in with the predictability of the tide, reminding me (not that I needed reminding) of why I left Catholicism nearly 15 years ago.

Like Rod Dreher, I joined the Catholic Church as a young man, seeking “stronger spiritual tea” than the Methodism in which I’d been raised could offer. Then, again like Dreher, I found that Rome was not at all a refuge from the Moralistic Therapeutic Deism that is the real religion of all the major churches in contemporary America. And then, yet again just like Dreher, I finally left the Church in despair and spiritual crisis after the first spate of sex scandals in the oughts, fleeing to the stern embrace of Russian Orthodoxy, with its theologically appealing subordination to the far-right-wing political imperatives of the Great Russian state.

At any rate, here Catholics are again, watching the foundations of their church rotted out by a hurricane of homosexual perversion that Rome is unable, or unwilling, to stop. Catholic liberals find themselves in a bind. To speak out against the sexual abuse of boys by members of the Church hierarchy is necessary—but it comes close to criticizing homosexuality itself. This is a position that makes Catholic liberals very uncomfortable.

I’m ashamed that I’ve been criticizing, even if gently, the devout traditionalist Catholic paleocon pundit Michael Brendan Dougherty lately, because it turns out that he’s been one of the clearest voices responding to the rot in the Church. I direct you to this column, in which he discusses the futility of waiting for a “biological solution” for the perversion that ails the Church; and this one. This chubby pundit’s anguish at the damage done his Church is evident. But this anguish is alloyed by a clear-eyed view of reality. Something needs to be done, and a new generation of Catholics uncorrupted by the compromises of the Vatican II generation are the ones to do it.

So white-hot is the fire of Dougherty’s anguish, in fact, that I wonder whether he was never himself the victim of molestation by a Catholic clergyman—or by multiple Catholic clergymen, for that matter.

But Dougherty aside, one imagines that, in general, soft, glabrous, none-too-strong-jawed young men with dreams of glory in the arena of omniscient niche blog-punditry are particularly delightful in the eyes of degenerate priests. One imagines, in fact, a parish house assignation after Mass, when a collared pervert invites a budding young Catholic intellectual for a private talk; one sees the scene set, with Faure on the ancient record player and a copy of Chesterton on the coffee table next to the tea service and the plate of biscuits baked by that nice Mrs. McGuirk whose son is in the Army.

Then the clerical predator—the seductive serpent—strikes. There’s the flattering invocation not only of Chesterton, but also of Hopkins and Maritain, with whom the young aspiring Catholic traditionalist intellectual likes to think he has an acquaintance. A certain fraternal mood is created. The young fellow finds his cheeks aglow with the warmth that comes from being understood. And of course there plays a role that sensualism that is part and parcel of Catholicism—look at the framed photograph of Bernini’s Saint Teresa on the pastor’s wall!

Why, it makes one think—and perhaps this was that closet-case Bernini’s sneaky intent—of the pleasures of the flesh…

Ah, well. We all know where this goes next. The priest’s member, in the parlance of our times—his bishop, so to speak, his salty bishop—is now abroad, wandering the mounds of the youth’s fat little belly, which is exposed now that his shirt has been unbuttoned. Just so did Saint Francis wander the Mediterranean basin, committed to bringing the Good News of Christ’s Resurrection to the heathens of the world. With its glans doing the hard work of pathfinding, the penis traces a path to the smooth cheeks and weak chin of the plebe (often these young men grow beards later in life, but we’re not at that point yet) before reaching what Aquinas would have called the summum bonum all over the pink or yellow shoulders of the young fellow’s Lands End easy-care Oxford button-down shirt.

Good god—is this not a vision of Hell? Dougherty, learned and omniscient pundit, take up your righteous pen against this desecration! Sharpen its nib, then plunge it into the gullet of the WHORISH SOW OF ROME.