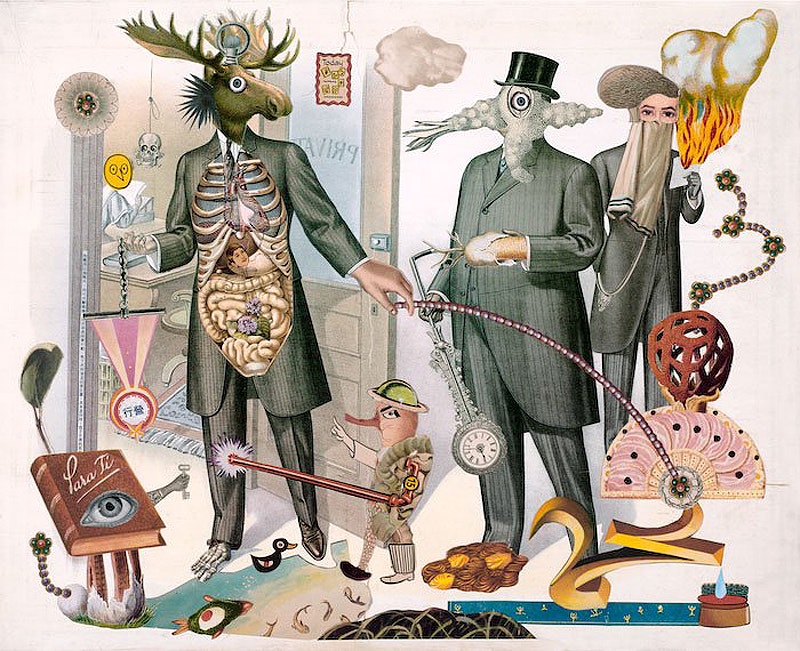 "I don't care much for plucky heroines," one tale begins. "The dude was DEEP," another ends. "If there was a God," muses a third, halfway through, "I would believe in him." Each of these lines of dialogue is drawn from Lou Beach's 420 Characters (2011, Houghton-Mifflin/Harcourt), in which the surrealist Californian artist turns author.

There are 169 stories here—or excerpts, or maybe story-lets—each clocking in at about 420 characters per, so the effect is less New Yorker short story and more boiling an anecdote down to manageable cocktail party size. His quick-hit fables range from the darling to the solicitously effervescent to the crudely colloquial, and—though the names Jess and Jesse seem to pop up quite often—are almost defiantly unrelated to one another. These stories are unnamed, and demand various levels of reading comprehension.

Among the more plausible ones are these: a droll cross-section of the outset of a kidnapping from the victim's perspective; suitors competing for a woman's affections; NGO staff barely escaping death on a job in the Congo; a case of mistaken litterbug accusation on a Boston Harbor tour boat; a man entering a barber shop and taking stock of his surroundings. In one of my favorite bits, a seemingly omniscient anti-graffiti crusader decides to take the law into his own hands: "I'll jump out, the aerosol avenger, and cover their faces and backs with perfect penmanship, my name."

Those familiar with the foldout insert that accompanies Green Day's Insomniac album may already have made peace with Beach's primary aesthetic: the pop-art, mad-libbing of portraiture, though he's not above playing it straight if the money's right. Samples of his visual work pepper 420 Characters, and the book is at its best when he indulges his wackier impulses. Sometimes that means tweaking a straight story just so, as when every servant in a household is acting peculiar except for a chauffeur who is "wiping a long black fender with my cashmere sweater," or when a character's sleepless condition is revealed to be caused by birds nesting in his or her nose. Beach is hardly afraid to up-end conventional understandings of how stories function: some offerings are equivalent to pure impressionism, or the blunt, cock-eyed pose of a David Berman poem.

When Beach drifts into collage and pastiche, it becomes easier to see the giants on whose shoulders he stands: Berman, Jack Handey, Donald Barthelme, dialogue-averse children's illustrator du jour David Wiesner. In reading the following story, consider how cleverly the author has synthesized his influences; it reads like a meta-fiction aside, a cruel nursery tale, or a failed Mitch Hedberg routine that bit it backstage, a psychosomatic twist on popular understandings of Easter chic and actual chickens.

"'Are you my mommy?' said the little blue egg. 'No dear. You are a plastic trinket full of sweets,' said the brown hen. 'My baby is over there,' and she pointed to a pink marshmallow chick being torn apart and devoured by a toddler. The hen screamed and woke up, her pillow wet with sweat, the sheets twisted around her legs. 'Christ, I hate that dream.' She reached for a smoke."

There is another story, a more relatable one, where a narrator pleads with an unseen antagonist to unlock the door to a bedroom from which deafening death metal emanates; the narrator pities the antagonist's blue tetras: "The poor, poor little fish." "Her mouth is a hammer," begins something that bears taunting traits of domination, sado-masochism, object personification; the joke is that the reader is denied the satisfaction of the necessary context required to understand what little is there, but maybe there's something special to be said for gratification that's delayed indefinitely.