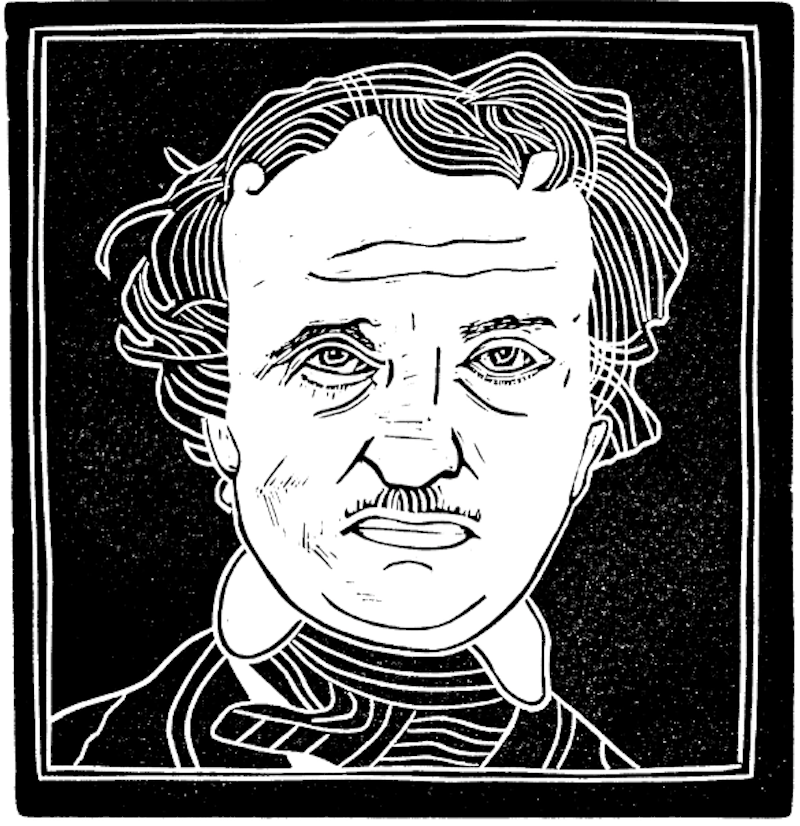 We all know Edgar Allan Poe as the master of the macabre. Yet this fails to convey his impact on American literary history. Poe was the first American to make a living exclusively at writing. His first love was poetry but this didn’t pay the bills. He became an assistant editor at the Southern Literary Messenger in Richmond, Virginia. Here he contributed his own poems, essays, short stories and literary reviews. Poe’s literary criticism was so scathing he gained the nickname “Tomahawk Man” and was said to write with “prussic acid instead of ink.” He expressed his greatest wrath against Henry Wadsworth Longfellow, one of the most beloved poets of his day. Poe accused Longfellow of plagiarism, laziness and shapeless writing. The so-called “Longfellow War” lasted 10 years.

Poe’s interest in the science of the time allowed him to include details that made his stories seem authentic. He wrote about cosmology and the origins of the universe, and also about Mesmerism, the idea that a mysterious substance known as ether could be manipulated to alter people’s thoughts.

In 1838, Poe published The Narrative of Arthur Gordon Pym of Nantucket, his only full-length novel. The story follows the adventures of Pym as he stows away on a sailing vessel that encounters mutiny, cannibalism and arctic exploration. Poe later wrote a feature story for The New York Sun depicting the journey of a hot-air balloon traveler who flies across the Atlantic Ocean. The story was treated as news but it was a hoax. These two stories, as well as Poe’s "The Masque of the Red Death" (1842) about an epidemic and a comet striking earth, have been credited as inspiring the science fiction genre.

In addition to inspiring the science fiction genre, Poe also is credited for inventing the mystery genre. "The Murders In The Rue Morgue," published in 1841, introduced the first fictional detective, Auguste C. Dupin. The story utilized the technique known as “the locked room” where a murder occurs in an apparently enclosed space and the detective’s challenge is to discover the murderer’s methods. Poe continued Dupin’s exploits in the stories "The Mystery of Marie Roget" (1842) and "The Purloined Letter" (1845). Poe focused on a “study of the criminal mind” which later had a direct impact on Sir Arthur Conan Doyle’s Sherlock Holmes.

In 1845, Poe wrote and published "The Raven" bringing him immediate fame. He was paid just $9 for the poem’s publication in Graham’s Magazine, but Poe became the first American “rock star” writer. This allowed him to tour the country, reading his work aloud and gaining extra income. Poe was also the first American fiction writer to gain fame in Europe. His stories were translated into French by the author Charles Baudelaire.

Sadly, Poe’s young wife Virginia died of consumption in 1847. This began Poe’s downfall. He was unable to write for months, turned to alcohol, failed at several romances and attempted suicide. By 1849, Poe was drinking heavily and wandering the Baltimore streets delirious.

Though the story of Poe’s final days is complicated, he disappeared for five days before he was found in the bar room of a public house wearing clothes that were not his own. He died at Washington College Hospital surrounded by strangers. His death has been attributed to alcohol, cholera, heart disease, rabies, tuberculosis and suicide. He died at 40, influential in triggering two literary genre movements, world famous for his tales of murders and madmen and directly responsible for writers realizing they could make a living via the written word.