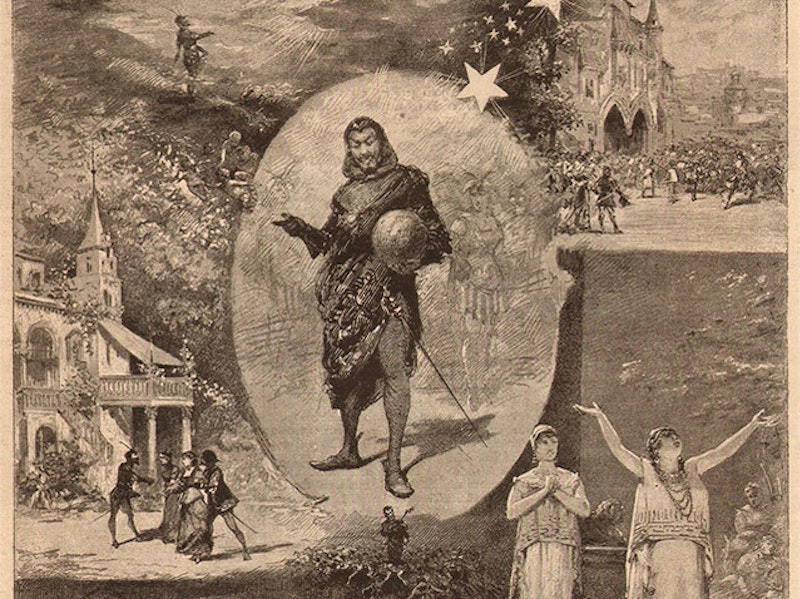 My uncle Bob, an opera lover since his pre-war Vienna childhood, took me to see Boito’s Mefistofele at New York City Opera sometime in the 1980s. I don’t know who played the title role—possibly Samuel Ramey, who was famed for the part—but I’ll never forget that Devil.

In the prologue, Mefistofele, in his bass voice, offers a bet that he can successfully tempt the upright scholar Faust; then is startled as a booming offstage God accepts the bet. Faust proves pliable, as the whistling Mefistofele transports the scholar in place and time to experience pleasures. In the epilogue, the Devil is ready to collect the bargained soul, when Faust suddenly repents and is saved; more than miffed, Mefistofele rolls around on stage, singing his rage.

The Faustian legend doesn’t always end so leniently. Some versions, including Berlioz’s La Damnation de Faust, closes with the scholar in Hell. Striking a deal to get power and gratification in exchange for one’s integrity and decency is a tragic theme that’s resounded through centuries of culture, with several opera treatments as well as the plays of Marlowe and Goethe, among other works. The man who’s sold his soul leaves the stage as a diminished figure; no last-minute dispensation can wipe away the stain of corrupt, power-mad folly.

The Faustian bargain is one of vile calculations and severe moral dangers, whether one is accepting a diabolical offer of transportation to Ancient Greece for a luxurious encounter with Helen of Troy; or signing onto a specious Texas federal lawsuit and other dishonest efforts to invalidate the votes of millions of Americans based on unsupported claims of massive fraud. It’s disturbing to think I used to admire Rudy Giuliani, whose sharp-edged personality I should’ve found more off-putting when he was mayor of New York. One affinity I had for him was that he was an opera-lover. I didn’t anticipate that he’d end as a comic-opera figure.

The grand finale is an operatic tradition, one not readily replicated in other venues. The moment of truth comes in a rising crescendo; the ensemble is fully involved as the conflict reaches a definitive resolution; the curtain falls before a brief rise, and bouquets are thrown. It’s a different sensibility from that of a soap opera or reality-TV show, where hastily contrived plotlines drag on as the villain trots out one desperate ploy after another. Donald Trump is exiting the stage as a Mephistophelean corrupter but without the dignity of Boito’s Mefistofele.

New York City Opera has been at Lincoln Center for decades, shadowed by the better-known Metropolitan Opera. City Opera was the “people’s opera,” as Mayor Fiorello LaGuardia called it when the organization was founded in 1943. While it didn’t have the Met’s pricey sets and deep-pocketed patrons, it had its own freewheeling, creative verve. It went bankrupt in 2013 but relaunched in 2016. Among the perhaps two dozen operas I saw at the Met or City Opera decades ago, Mefistofele stands out as a notable peak of drama.

Going to the opera’s a habit I fell out of in the past decade, the pastime an inconvenient one for parents of young children. In the COVID era, opera performance has mostly been suspended and has shifted online, to a degree, with free and paid offerings. While there are doubts as to what extent movie theaters will come back in a post-pandemic era, the opera will never fit comfortably on a screen instead of a stage.